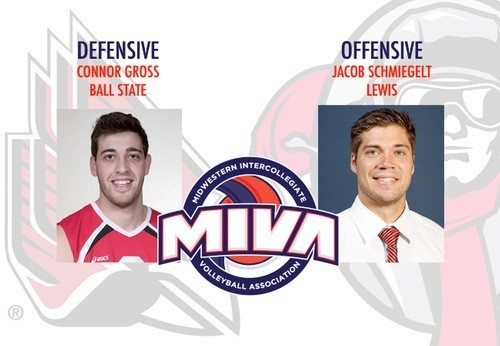 Ball State’s Connor Gross and Lewis’ Jacob Schmiegelt have been named the Midwestern Intercollegiate Volleyball Association Players of the Week, the league announced on Tuesday (Jan. 17). Gross earned the Defensive Player of the Week honor while Schmiegelt received the Offensive honor.

Gross averaged 3.29 digs per set in Ball State’s victories over Saint Francis (PA) and Penn State. The senior setter totaled 11 in Ball State’s sweep of the Red Flash on Friday. On Saturday he turned in 12 digs with three blocks (one solo) to help the Cardinals defeat then No. 14 Penn State.

Schmiegelt hit .526 on the week as the Flyers defeated Harvard and No. 5 Pepperdine. The senior middle hitter hit .737 with 15 kills on 19 swings in the Flyers’ win over Pepperdine. He also had five blocks in the match. In the opening contest of the week, a win over Harvard, he contributed 10 kills.