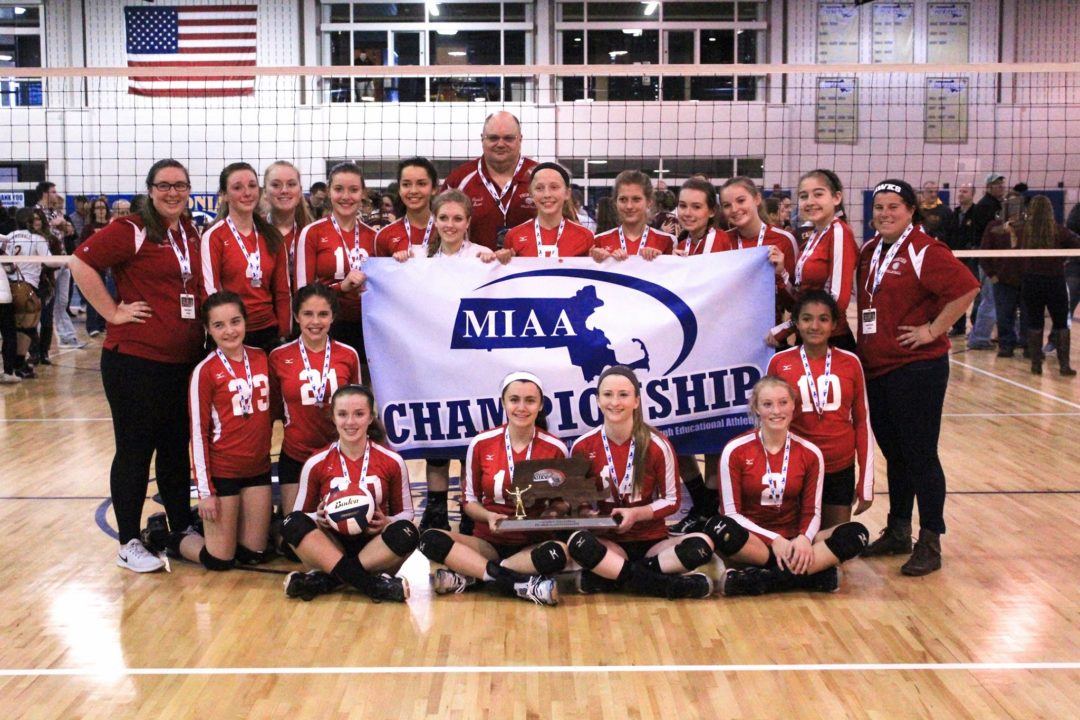 The Massachusetts volleyball state championships wrapped up on November 19th, with three teams winning division titles. All Massachusetts division brackets and results can be found here.

Barnstable High School won their 18th volleyball state title in straight sets over Newton North on Nov 19th. The three-set sweep ended with scores of 25-19, 25-21, and 26-24.

Barnstable went 26-1 for the entire season, and the only match they lost was to Newton North in regular season play. They avenged that loss in the championship finals to add an 18th state title to their already impressive collection. This is the Red Raiders’ 12th title in 14 years.

The team was led by Sophomores Ingrid Murphy (17 kills, 15 digs, and two aces) and Riley James (18 kills, 14 digs) who had double doubles in addition to a couple aces and blocks.

Hopkinton won their second Division 2 state title in three years by defeating runner up Notre Dame Academy. The championship game only took three sets, with the Hillers winning with set scores of 25-17, 25-18, and 25-23.

Notre Dame won last year’s championship game, and hoped to win a consecutive title. Both teams had a 22-2 season, but it was Hopkinton that pulled out the victory when it counted most.

The Case Cardinals ended Frontier’s six-year championship streak to claim victory in the Division 3 finals. Scores of the three-set match were 26-24, 25-20, and 25-12.

Case (24-2) defeated Frontier, who took an underdog path to the final match after a 12-13 ‘rebuilding’ season. With no returning starters, the Frontier Red Hawks did not anticipate a 7th consecutive championship win to add to their streak, but they beat the odds by even making it to the finals.

The Cardinals’ last state title win was seven years ago, in 2009, when they beat none other than the Red Hawks.