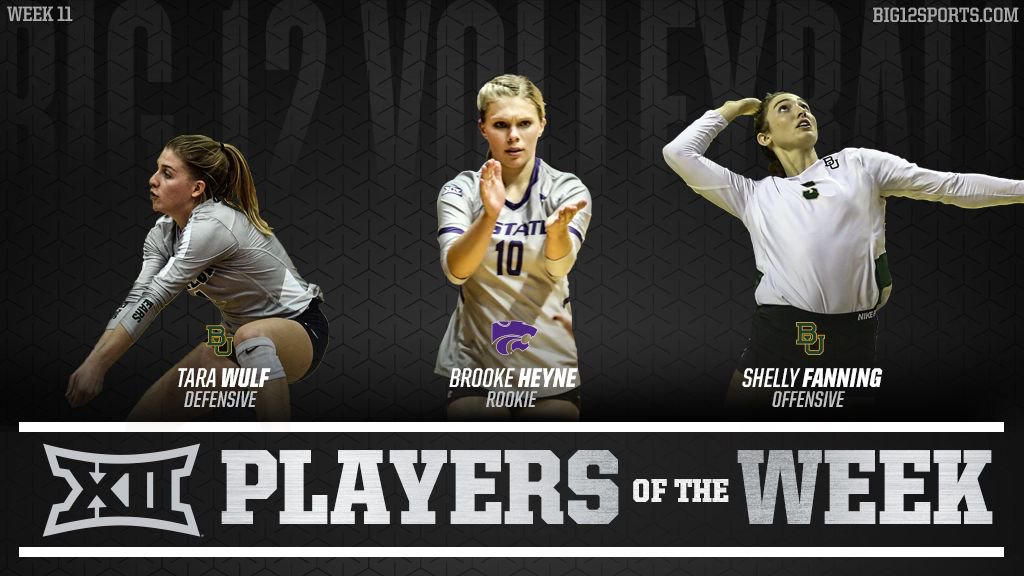 For the fourth time this season, two recipients of the Big 12 weekly awards hailed from the same institution as Baylor's Shelly Fanning and Tara Wulf both earned the honors. Kansas State's Brooke Heyne received her second Rookie of the Week award. Current Photo via Big 12 Conference

For the fourth time this season, two recipients of the Big 12 weekly awards hailed from the same institution as Shelly Fanning (Baylor) and Tara Wulf (Baylor) both earned the honors. Brooke Heyne (Kansas State) received her second Rookie of the Week award.

Fanning (Offensive Player of the Week) led the Big 12 in kills per set (6.00) and points per set (7.12) after a match-high 24-kill performance against Oklahoma. She recorded the most kills in a four-set Big 12 match this season and leads the league in hitting percentage (.402). This week’s award marks her fourth this season, third in the past four weeks, second in a row and sixth all-time.

Defensive Player of the Week honoree Wulf led the league in digs per set (7.00) during last week’s road matchup and fell one dig short of matching her career-high after a 28-dig outing. Her performance matched the league-high mark in conference action this season as she helped BU lead the Big 12 last week in digs per set (22.75). This marks her first Big 12 weekly accolade.

Heyne was K-State’s leader in kills (11), hitting percentage (.450) and digs (10) in its straight-set win over West Virginia. She tallied her first career double-double as she led all freshmen in kills per set (3.67) and digs per set (3.33) last week. With this week’s honors, Heyne earned her second award in the past three weeks.

After leading #KStateVB in kills, hitting percentage and digs in a sweep of WVU, Brooke Heyne is your @Big12Conference Rookie of the Week … again!