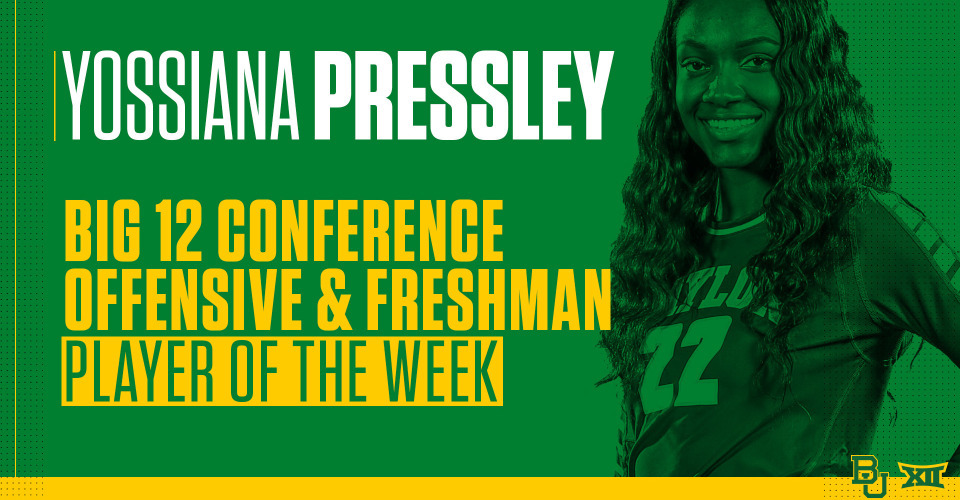 Baylor's Yossiana Pressley picks up two Big 12 honors this week, being named the Offensive Player and Freshman of the Week. Current Photo via Baylor Athletics

Offensive Player/Freshman of the Week

After having to step up in the absence of Katie Staiger, who is sitting out to rest and prevent injury, Pressley showed off her talents to nab two Big 12 awards. Pressley’s two honors are the first time that a freshman has accomplished the feat since Jana Brusek did so on November 3, 2014.

This week, Pressley posted an average of 5.67 kills per set and 6.42 points per set. In the team’s win against Texas BayTech, Pressley put down 14 kills on a .346 hitting clip, nearly eclipsing a double-double with nine digs. Pressley cranked this up against Oklahoma, putting down a career-best 20 kills on a .395 hitting performance. This matched the Big 12’s best offensive performance in a three-set match this season.

Hillegas has now won her fourth Defensive Player of the Week honor this season and the sixth of her career. On the week, Hillegas recorded two 20-dig matches, leading the Cyclones to an unbeaten weekend.