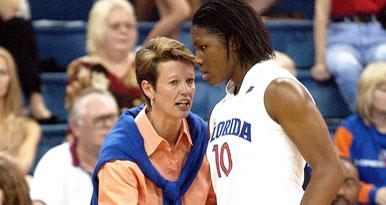 Current University of South Florida assistant coach Benavia Jenkins was inducted into the University of Florida’s 2017 Athletic Hall of Fame class. Jenkins played for the Gators from 1999-2003, where, as a middle blocker, she collected various honors and set many records over her four seasons.

During her tenure at Florida the women’s volleyball team made two Final 4 appearances, as well as a national championship appearance to close out Benavia’s final season as a Gator.

After redshirting during the 1999 season, Jenkins broke out onto the collegiate scene in 2000 as a redshirt freshman, where she earned First Team All-SEC honors after posting 1.63 blocks per game with a .412 hitting efficiency.

Jenkins only continued to improve from there, earning Third Team All-America honors her junior season and Second Team for her efforts in her senior campaign. It was in her final season that Jenkins set the school record for all-time blocks at 601, also becoming the first ever Gator to tally more than 600 blocks and 1,000 kills. She was a recipient of First Team All-SEC awards for each of her four seasons with Florida.

Now an assistant coach at USF, Jenkins has remained involved in the volleyball world since completing her days of playing professionally overseas. She first coached at Lincoln Park Academy before earning a few assistant coaching positions with Santa Fe College and Coastal Carolina respectively before coming back home to Florida.

“She was a phenomenal player and the kids that are currently in our program really look up to her,” USF volleyball head coach Courtney Draper told The Oracle, USF’s student newspaper. “They strive to be like Benavia on a daily basis. She has really made a difference in our program since her arrival.” And made a difference she has- USF posted a .235 hitting clip as a team during the 2016 season, fifth best in their conference. Two USF players, Joli Holland (.337) and Clara Payne(.321), posted top-ten individual hitting percentages in the American Athletic Conference.

The Florida 2017 Hall of Fame class is rounded out by several basketball, football, tennis, and golf players. Jenkins is the lone volleyball inductee.