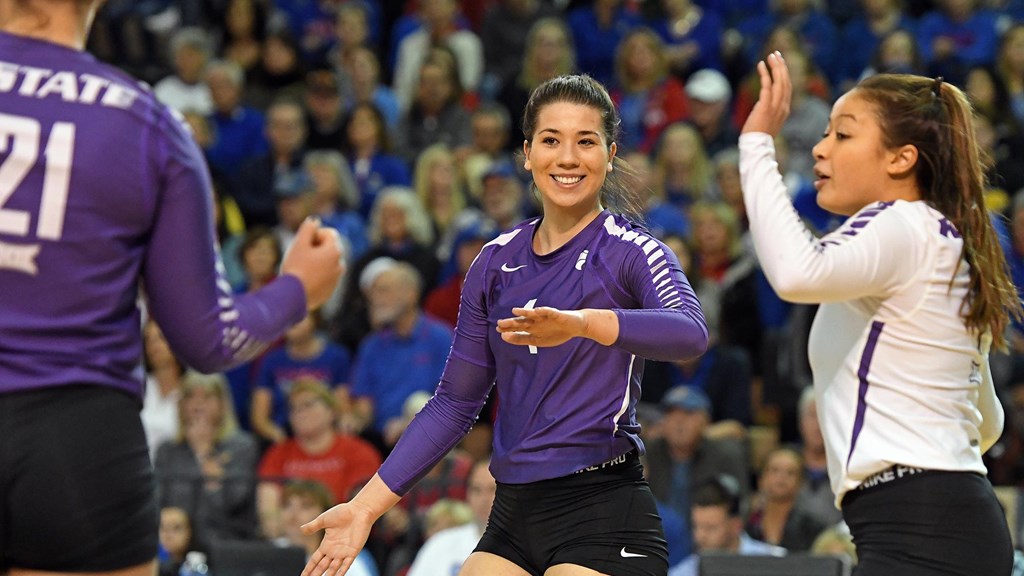 K-State’s Sarah Dixon was tabbed Offensive Player of the Week after dishing out 11.55 assists per set and leading the Wildcats to a .284 team hitting efficiency in three matches at the Marcia E. Hamilton Classic in St. Louis, while also chipping in 2.72 digs per set.

The redshirt junior notched 40 assists, nine digs and two blocks against Marquette. She then tacked on a career-high 46 assists to go with seven digs, three kills and an ace in a four-set win over the host Billikens. Dixon closed out the weekend with a 41-assist, 14-dig double-double vs. Western Kentucky.

The accolade is the first of Dixon’s career and the first Big 12 Player of the Week honor for a K-State setter since 2015 (Katie Brand).

Hillegas averaged 5.92 digs per set. She pulled up 21 digs and added five assists in the upset win over Northern Iowa on Wednesday. She then tallied a season-best 31 saves against Gonzaga, marking the sixth 30-dig match of her career. Against host Montana, the redshirt junior chimed in with 13 digs. The Charles City, Iowa, native tacked on 12 digs and three assists in the weekend finale against Utah.

TCU’s élan McCall was tabbed as Rookie of the Week for the second straight week, becoming the first Horned Frog player to do so in program history and just the second player to earn two accolades in a season.

McCall notched 6.00 kills and 2.08 digs per set at the Colorado State Tournament, while hitting at a .291 clip. Her 72 kill tally, included a career-high 31 to go with 13 digs and a .349 hitting effort against the host Rams, making her the first TCU player to reach the 30-kill milestone since 2000 (Amy Atatmanczuk – 30 vs. Cal State Fullerton, Sept. 16, 2000). The Leander, Texas, native notched 13 kills, four digs and two aces against Florida State on Friday. McCall poured in 28 kills, eight digs and seven blocks, while hitting .306 against Cincinnati, before posting her breakout effort vs. CSU.

You better watch out. élan McCall is just getting started.
Take a look at the back-to-back @Big12Conference Rookie of the Week!
🗞️: https://t.co/H3XXtzPZxO#GoFrogs #EyesOnTheRise pic.twitter.com/84tzebJFIU