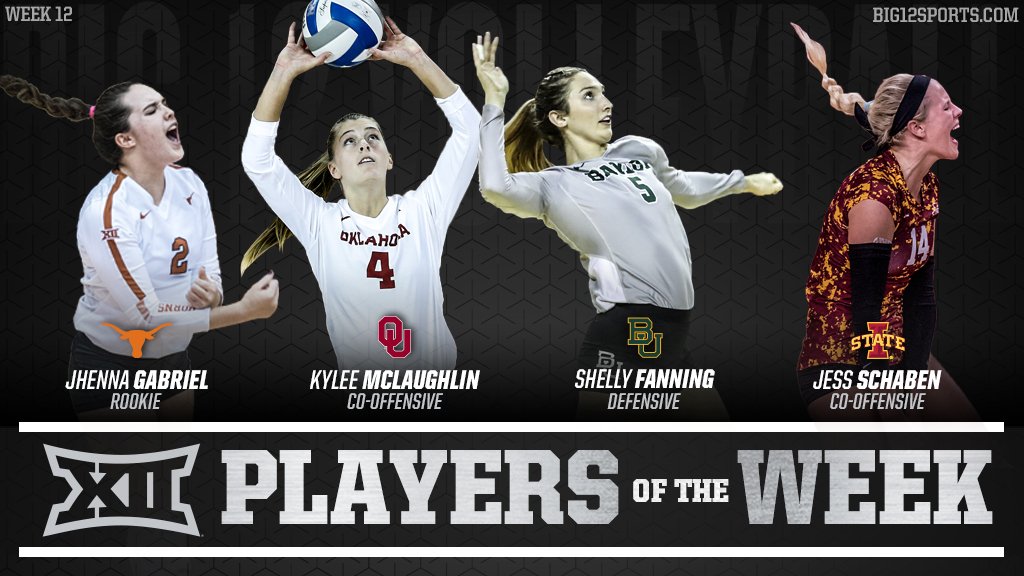 Schaben, Co-Offensive Player of the Week, produced back-to-back 20-kill performances to lead Iowa State on the week. On the season, the senior outside hitter now has four 20-kill matches under her belt after her 26 and 22 kills in matches against Baylor and West Virginia. She led the league in kills/set (6.00) and points/set (6.62) on her way to her eighth all-time weekly award, first on the year.

The other recipient of the Co-Offensive Player of the Week honors, McLaughlin, led the Big 12 with 108 assists, the most in a week’s span during conference play this season, and 12.00 assists/set last week. She set a career-high in assists with 62 against Texas Tech, matching the most by a Big 12 student-athlete in all matches this season.

Fanning, back-to-back Big 12 Offensive Player of the Week, showcased her defensive efforts last week on her way to her seventh all-time award as she garnered Defensive Player of the Week honors. The middle blocker led the league in blocks/set (2.43) and total blocks (17) in week 12. She earned a career-high nine blocks against Iowa State and played a part in all of Baylor’s 9.5 blocks during the match. This week’s award marks her fifth this season, fourth in the past five weeks and third in a row.

Congrats to the #Big12VB Defensive Player of the Week, Shelly Fanning! #SicEm

First time Rookie of the Week honoree, Gabriel, tallied the most assists/set among all freshman last week (10.68), which ranked fourth-most on the week. The rookie assisted Texas to a league-best .373 hitting percentage through her 76 total assists on the week.

Congratulations to Jhenna Gabriel on her Big 12 Rookie of the Week honor!