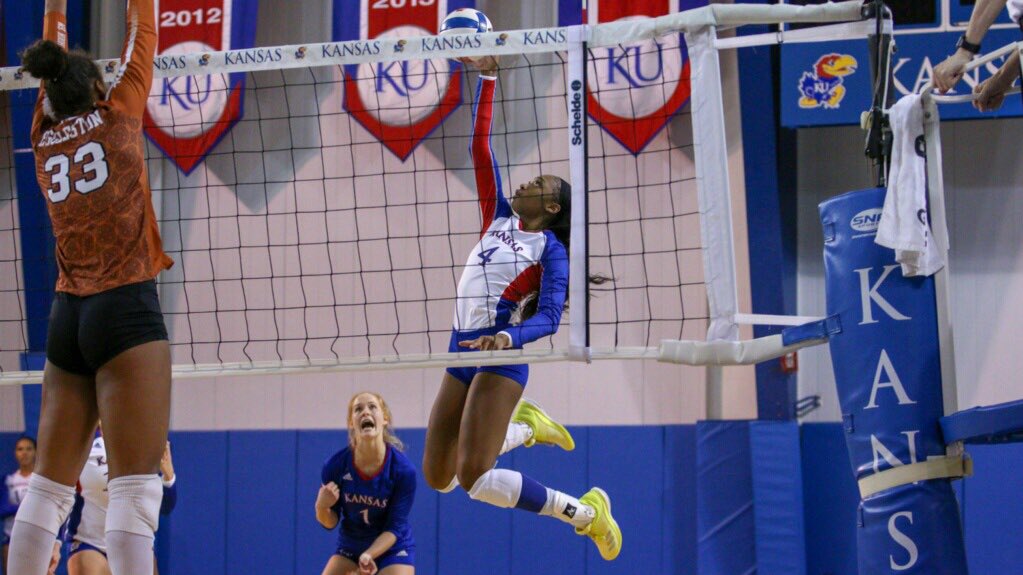 Jada Burse led the way for the KU attack as they withstood a Texas comeback to score the upset and claim first in the Big 12. Archive Photo via KU Athletics

MATCH OF THE NIGHT:

A few years back, Kansas had gone over a decade from their last victory over Texas. Since, they’ve earned two victories in the past three seasons now, as once again they’ve vaulted themselves into legit Big 12 title contenders with a win over Texas – as they did in 2016.

The Jayhawks were more unassuming coming into this one though. They began the year at 4-4, and even at 4-0 in Big 12 play were pushed to the limits a couple of times. Texas was too, but that #6 next to their name may have clouded judgment on how close this could have been. Sure enough, Kansas won to not just earn an upset, but also take sole possession of first in the league.

For Texas, they’ll look to go back to the drawing boards. They were pushed by Kansas State and TCU earlier on the road, but came out on top. Sure enough in this one, some similar passing and setting troubles plagued them. At one point, setter Ashley Shook was even pulled early on.

Kansas established an early lead behind keeping Texas out of system, their block led by freshman Rachel Langs (6 kills, .357, 6 blocks) and the attack of Jada Burse (22 kills, .234) and Ashley Smith (17 kills, .533). Freshman Camryn Ennis (30 assists, 13 digs) and senior Gabby Simpson (20 assists, 10 digs, 5 kills) made up quite a 6-2 for the team. In the end, it was the same recipe (freshmen, Burse, blocking) that led to their hot streak as it did to their victory.

Next Up: Texas will remain on the road to take on Oklahoma on Saturday night. Kansas will also be on the road, as they get an upstart Texas Tech team on Saturday afternoon.

The Bears were without star pin Yossiana Pressley and fellow starting outside hitter Aniah Philo, but the Bears showed some of their depth in downing a TCU team that was without their stud pin in elan McCall.

In the battle of teams without the individuals that provide a majority of their offense, Baylor would overcome the first set loss in hitting .234 with more aces (5-1). TCU was held to a .145 mark and kept things close in blocks and digs.

In the losing but tough effort without McCall for a young TCU squad, it was a senior in Anna Walsh (17 kills, .318, 3 blocks) who led the Horned Frogs. Katie Clark (10 kills, 4 blocks), Berklie Baker (16 digs) and Tori Dilfer (39 assists, 9 digs) also had strong totals, though the offense with more youth seemed to miss McCall more than the Bears missed Pressley and Philo.

Next Up: TCU stays on the road but heads up North to battle Iowa State while Baylor heads to Morgantown for a road test against West Virginia.

After a 4-0 start in the Big 12, Texas Tech has fallen two straight times, this time in Norman to a continually improving Oklahoma squad.

The Red Raiders meanwhile had eight more errors in the match and Emily Hill (15 kills, 12 digs) though effective, was forced to work for every point in hitting .154. Katy Keenan (10 kills, .444, 5 blocks) would be the most efficient as Missy Owens (41 assists, 6 digs) and Emerson Solano (21 digs) contributed. It wasn’t enough though, as outside of Hill and Keenan, Texas Tech had just 27 kills on a .132 clip.

Next Up: Oklahoma stays home for two more, including on Saturday when they host #6 Texas. The Red Raiders head home for Pink Night as they face Kansas.

After a 10-1 start in which Kansas State was ranked #23 in the VolleyMob Top 25, their woes continued as a beaten up Iowa State squad could not be stopped offensively and gave the Wildcats their sixth straight league loss.

Next Up: Kansas State gets the weekend off in preparation of hosting Kansas next Wednesday night while Iowa State faces TCU at home on Saturday.