Big East Action Heads to the Coast for Eight Matches 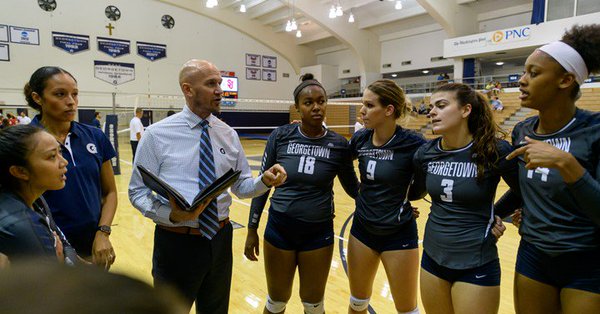 Eight of the nine BIG EAST volleyball matches this weekend will take place on the East Coast. No. 10 Creighton is the only remaining unbeaten team in the league at 6-0.  Current Photo via Georgetown Athletics

NEW YORK – Eight of the nine BIG EAST volleyball matches this weekend will take place on the East Coast with No. 10 Creighton locked in to its top-10 national ranking for a fifth straight week according to the latest AVCA poll. The Bluejays are the only remaining unbeaten team in the league at 6-0. No. 19 Marquette holds firm to its ranking for a second consecutive week. The Golden Eagles improved to 6-1 in the BIG EAST with a home sweep over Butler on Wednesday.

Xavier will stay in the Midwest setting up a clash with Butler on Saturday at 2 p.m. Georgetown welcomes Providence and DePaul heads to St. John’s with both matches beginning at 5 p.m. The final two matches of the weekend starting at 7 p.m. will feature Creighton at Villanova and Marquette taking on Seton Hall (6-14, 1-6) in South Orange, N.J.

On Wednesday, Marquette (15-4, 6-1 BIG EAST) took care of business at home with a 3-0 win against Butler (25-12, 25-13, 25-22) that drops the Bulldogs to 6-14 overall and 3-5 in the BIG EAST. Golden Eagle junior Allie Barber recorded a match-high 17 kills, while senior Anna Haak tallied 11 digs and 10 kills to secure her third double-double of the season. Freshman Elizabeth LaBue collected 14 digs for Butler in the defeat, with senior Bri Lilly and junior Brooke Gregory adding eight kills apiece.