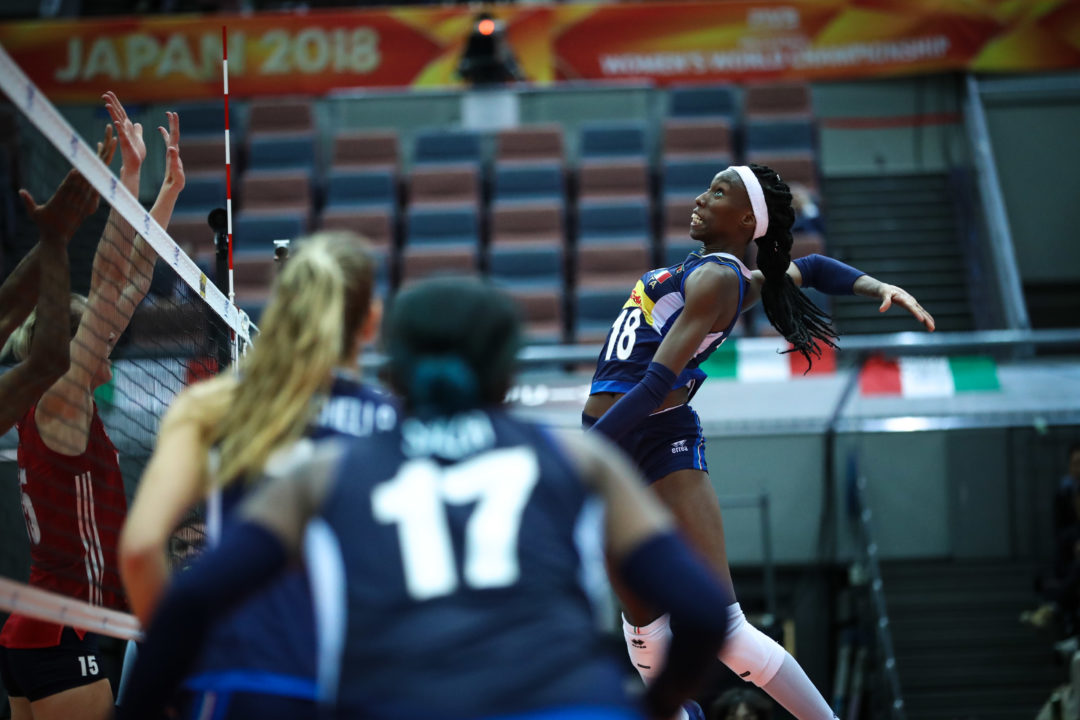 The star of the show thus far in the World Championships has been Italy's Paola Egonu. The 19-year old has notched 182 total points (150 kills, 17 blocks, 15 aces) and also ranks among the top 10 in aces and kills.  Current Photo via FIVB

The star of the show thus far in the World Championships has been Italy’s Paola Egonu. The 19-year old has notched 182 total points (150 kills, 17 bocks, 15 aces). She has downed double-digit scoring tallies in all nine of the team’s matches, including 29 twice and 33 in the Round 2 finale against the United States.

The top three most efficient hitters are still in the competition with Serbia’s Tijana Boskovic leading the way at 56.74 success rate. Boskovic missed the team’s last two matches with an abdominal injury. Italy’s Miryam Sylla and Sloetjes follow, each hitting over 50 percent. Boskovic’s teammate Brankica Mihajlovic and China’s Xiangyu Gong also rank among the tournament’s best spikers, making good on more than 48 percent of their attempts.

Azerbaijan’s Polina Rahimova the top server in the competition through two rounds, racking up 20 aces (0.67 per set). The Netherlands is among the competition’s top serving teams, with Sloetjes (3rd, 0.59 aces per set) and Juliet Lohuis (7th, 0.44) leading the way. Egonu has served up 0.50 aces per set, ranking fifth among all players, while China’s Xinyue Yuan (8th, 0.43) also is among the top 10 through two rounds.

The top digger in the first two rounds was Puerto Rico’s Shara Venegas, who notched 4.30 digs per set. Three of the top 10 diggers in the competition are left in Italy’s Monica De Gennaro (4th, 3.33 per set), Serbia’s Silvija Popovic (6th, 3.11) and the United States’ Kelsey Robinson (8th, 2.85).