• Heading into the final weekend of the season, three conference teams remain in the hunt for the Big Ten... Current Photo via Wisconsin Athletics 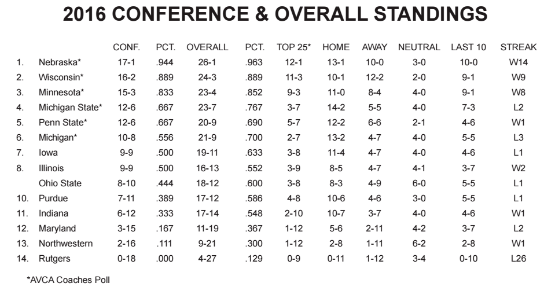 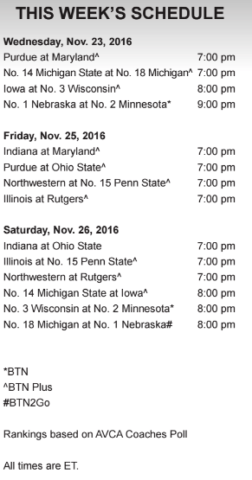 13 matches set to air on either BTN, BTN Plus and/or BTN2Go.

No. 2 Minnesota, No. 3 Wisconsin, No. 14 Michigan State, No. 15 Penn State and No. 18 Michigan. Illinois, Ohio State and Purdue are receiving votes in the poll.

• Nebraska and Minnesota are both ranked among the top five in the nation in hitting percentage. The Cornhuskers check in at No. 3, hitting at a clip of .300. The Golden Gophers are ranked fifth, with a team hitting mark of .296.

• Nebraska currently holds eight of the top 10, and 11 of the top 15, single-match attendance marks this season, eclipsing over 8,000 fans at the Bob Devaney Sports Center 11 times. Purdue has one mark among the top 15, drawing 8,240 patrons to Holloway Gymnasium against Indiana on Sept. 24.