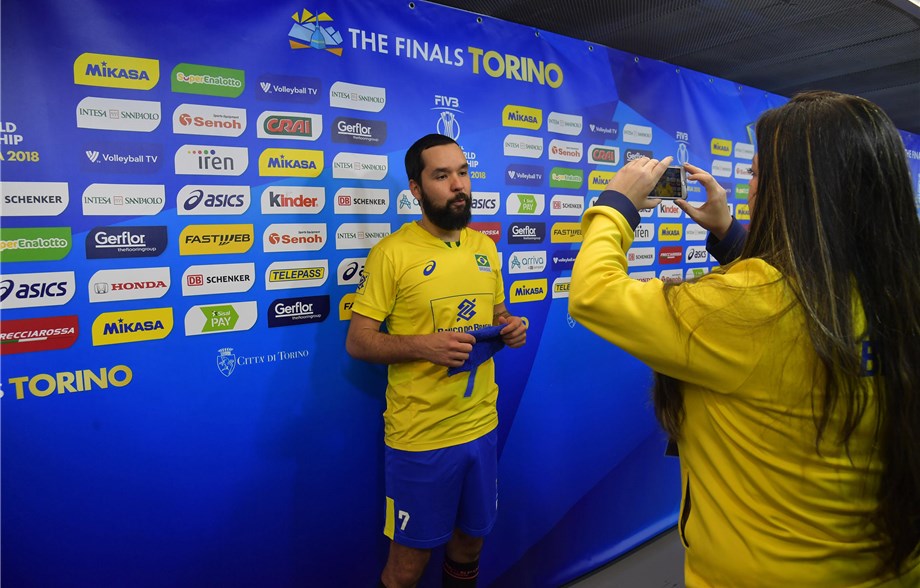 William was overwhelmed with emotion after leading hs team back from an 0-2 deficit on Wednesday against Russia. Current Photo via FIVB

The story of the day in Brazil’s come-from-behind, 3-2 victory over Russia to open the 2018 FIVB Men’s Volleyball World Championships Final 6 tournament was the insertion of 39-year old backup setter William Arjona to start the 3rd set.

Brazil’s hitters were neutralized to a stunning 3-for-20 in the 1st set, and things didn’t improve much in the 2nd set, so Renan Dal Zotto had to make a change.

His 39-year old backup setter came in to replace the team’s captain and one of the world’s best, Bruno Rezende. It wasn’t so much that the 39-year old had more experience than the man he replaced: Rezende has been on the last 3 Brazilian Olympic teams and last 2 Brazilian World Championship teams, while Arjona is playing in his very first World Championship.

Arjona, who has been named the Best Setter of the FIVB Club World Championship 3 times (2012, 2013, 2015) and the MVP in 2016, is  no slouch himself, though, and the shift was swift and immediate. Arjona brought a different angle and a ‘go-for-broke’ attitude that brought some creative sets that seemed to knock the previously-locked-in Russian defense off balance just enough for Brazil to win.

With his history at pro side Sada Cruzeiro, where he played until last season, he has a long history playing with the country’s top scorer Wallace (both players were with the club from 2010-2017), and played last season with Lipe and Douglas, Brazil’s 2nd and 3rd best scorers, respectively, against Russia. He even played with Isac, a reserve middle blocker who also came on in the 3rd set, at Sada Cruzeiro for many seasons.

In short, even though Bruno has been the starter on the Brazilian National Team, William has as much, if not more, experience playing with many of its star players, given Bruno’s decision to play 3 of the last 4 seasons in Italy (where he’ll remain next season with Lube).

“It was my dream to play a World Championship, and having reached the age of 39 the fact that I was able to give a decisive contribution against Russia is just too much to handle,” Arjona said after the match. “I’m proud of being part of this group and we have shown how much being a group is important.”

Now Dal Zotto has a choice to make for the team’s next match against the Americans on Friday. The teams have not yet played in this year’s World Championship, and when they faced off in the preliminary round of the Nations League – the exact same thing happened. Brazil got off to an 0-2 start with Bruno at setter, Arjona came in, and they won the next 3 to take the match. In the bronze medal match again, Bruno started and played all 3 sets, and the Americans won all 3 sets (albeit twice needing 28 points to do so).

In short: Bruno has lost all 5 sets he’s played against the undefeated Americans this year; while William has won all 3 that he’s played. But a coach’s intuition will sometimes play counter to the data presented. Brazil will be hoping that by the time that match arrives, they will have secured their place in the finals (a 3-0 or 3-1 win by the US over Russia on Thursday would do the trick). Thereafter, the only impact would be who they play in the semifinals (and there will be no easy outs at that point), giving Dal Zotto the chance to validate his hypothesis.