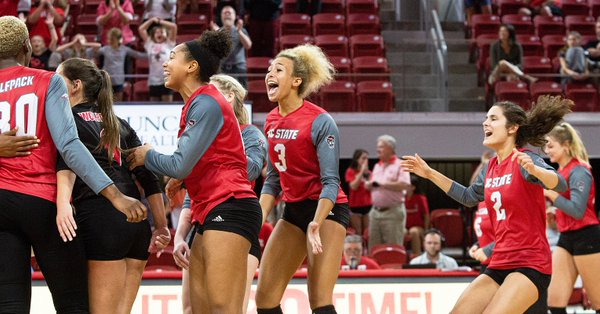 The NC State volleyball team will make the short commute over to UNC-Chapel Hill Wednesday evening to battle the Tar Heels in its first ACC road match.  Current Photo via NC State Athletics

RALEIGH, N.C. – The NC State volleyball team will make the short commute over to UNC-Chapel Hill Wednesday evening to battle the Tar Heels in its first ACC road match. First serve is slated for 6:30 p.m. inside Carmichael Arena.

The contest will be broadcast live on the ACC Network Extra, accessible through Watch ESPN and the Watch ESPN App. Admission is FREE for fans.

NC State heads into the matchup with a 7-5 overall record and a 1-1 mark in ACC play, while UNC-Chapel Hill is 4-7 and 0-2 in conference action.

In its last outing, the NC State battled to earn a 3-1 win against Notre Dame to pick up its first ACC victory of the season. The Wolfpack won the first two sets before the Fighting Irish took the third set, but NCSU closed out the match with a fourth-set win.

The Irish were predicted to finish fourth in the ACC’s Preseason Poll, while the Wolfpack was picked to finish in a tie for seventh.

In last Friday’s match against Louisville, the teams put together a rally that featured 46 contacts and lasted nearly a minute. The play has been viewed more than 45,000 times on Twitter from NC State Volleyball’s official account (@PackVball).

The play was also chosen as the top play of the week by NCAA Volleyball.

Kuchmaner Etching Her Name in the Record Books

Senior libero Makenzie Kuchmaner etched her name in the NC State record books with a rally-scoring era program record for digs in a four-set match with 32 against Notre Dame on Sunday. That total is also the most by any player in the ACC this season.

The Waxhaw, N.C., native tallied nine digs in the first set, 12 in the second, six in the third and five in the fourth. Kuchmaner entered the weekend averaging 4.45 digs per set and after the Pack’s matches against Louisville and Notre Dame she owns a 4.96 digs per set average.

She also leads the ACC in total digs with 238 on the year, which is a career-high.

Kuchmaner is also an honorable mention player of the week selection by VolleyMob.

The Wolfpack Can Dig It

NC State has recorded more digs than its opponent in eight of 12 matches this season and is 7-1 when accomplishing the feat. The Wolfpack is also ranked third in the ACC with 15.71 digs per set. Last year, NC State finished among the top of the conference in the statistic and is poised to do the same in 2018.

The Wolfpack owns the second-most digs by an ACC team this season with 94 in last Sunday’s match against Notre Dame.

NC State is a perfect 6-0 on the year when winning the second set. The Wolfpack has outscored opponents, 278-255, in the frame.

Wolfpack Among the ACC Rankings
Four Wolfpack players rank among the top 10 of the ACC individual rankings, as Lauryn Terry is eighth in the league with a .380 attacking percentage. Senior setter Kylie Pickrell has handed out the second-most assists per set in the conference with 10.67, while senior libero Makenzie Kuchmaner has collected 4.96 digs per set to rank second in the ACC.

Sophomore Melissa Evans is 10th in the conference with 3.46 kills per set and is also among the top 10 with 3.92 points per set.

UNC owns a 4-7 record through the first half of the season and dropped a pair of matches against Notre Dame and Louisville on the first weekend of ACC play. The Tar Heels were swept in last Friday’s match against the Irish and came up short against the Cardinals in five sets on Sunday.

The Heels won the last meeting between the teams, which took place inside Carmichael Arena, with a 3-1 win. NC State defeated UNC-CH in the first matchup of 2017 at home inside Reynolds Coliseum, 3-2.

Freshman outside hitter Destiny Cox leads the Tar Heels offensively with 138 kills on the year, averaging 3.54 kills per set. Redshirt sophomore Hunter Atherton has handled the setting duties and has collected 9.00 assists per set. Defensively, Mia Fradenburg leads the squad with 3.47 digs per set.