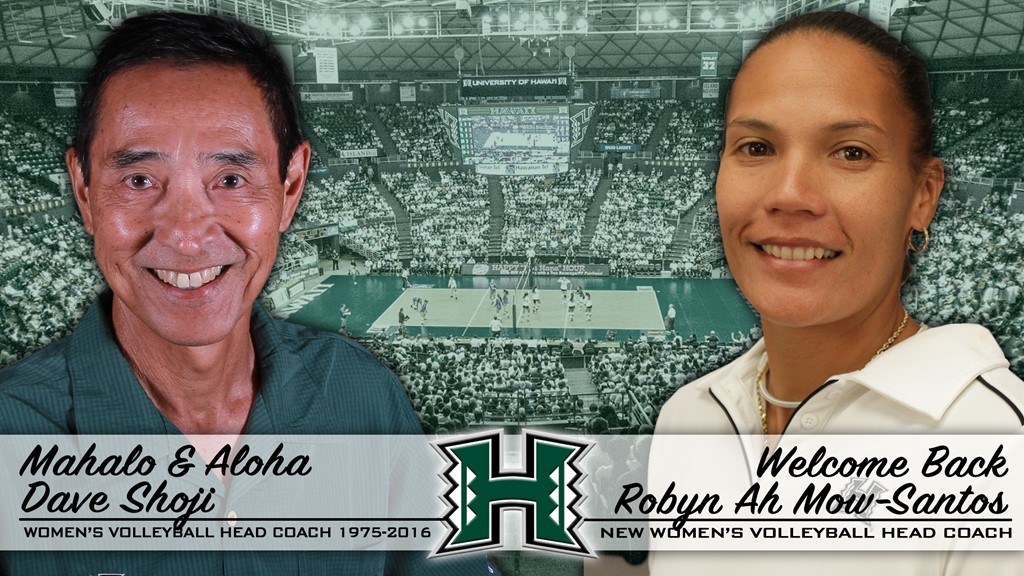 Dave Shoji will retire as the second-winningest coach in NCAA Division I history and be replaced by one of the best players he ever coached. Current Photo via Hawaii Athletics

A historic moment in college volleyball was announced on Monday out of Honolulu. For the first time in the lifetime of most Americans, the University of Hawaii has announced a new head coach for their women’s volleyball program, as 42-year head coach Dave Shoji has formally retired.

The move was alluded to in January, when Hawaii said that they were beginning a national search “contingent upon the anticipated retirement of (Shoji),” but at that time didn’t officially declare him retired. Now, that decisions has been finalized.

Roby Ah Mow-Santos will be the first female head coach in Hawaii women’s volleyball history – which is not hard to imagine, given that Shoji has been the team’s head coach for all but their inaugural season in 1974.

Ah Mow-Santos returns for her 3rd stint at Hawaii. She began as a player from 1993-1996, which included two AVCA First-Team All-America selections. She still ranks 3rd in assists (4,313) in program history, and in her final two seasons, the team finished 66-4 with a national championship game appearance. She was on the U.S. Women’s National Team for a decade from 19992008 and appeared at 3 Olympic Games, including as the team’s starting setter in 2000 and 2004. She earned an Olympic silver medal as a part of the 2008 Olympic Team, and professionally was named the MVP of the Swiss League.

Then from 2011-2015 she returned to Hawaii as an assistant coach, leaving after the 2015 season to move with her family to Las Vegas where her husband Niobel was stationed with the United States Army.

She played scholastically at McKinley High School in Honolulu.

Shoji was diagnosed last year with prostate cancer during the season, which he didn’t announce until after the team lost to Minnesota 0-3 in the second round of the NCAA tournament.

“I don’t think anyone will ever match what Dave has accomplished for our Rainbow Wahine volleyball program in terms of longevity and accomplishments,” Matlin said. “He has dedicated more than half of his life to the program and has touched the lives of hundreds of student-athletes. His legacy will live on through his well-deserved induction into the AVCA Hall of Fame and through all the blood, sweat and tears his teams have battled through on the court at Klum Gym and the Teraflex at the Stan Sheriff Center. Rainbow Wahine Volleyball will always raise a glass to Dave Shoji.”

“I’m happy to officially announce my retirement as the Rainbow Wahine volleyball coach,” Shoji said. “After much discussion with my wife Mary and my immediate family we felt the time was right to step away from coaching. I feel truly humbled and honored to have coached for 42 years and I’m grateful for all the support from our great fans, student-athletes, assistant coaches, and administration. The selection of Robyn Ah Mow-Santos is an excellent choice. She has the passion for the game; she found success at every level as a player; and she paid her dues as an assistant coach and is now ready to assume a head coaching position. She will have my full support and I wish her nothing but the best.”

“I am excited and humbled at the same time,” Ah Mow-Santos said. “Replacing Dave Shoji is impossible. I will never forget what he has done for me personally as well as the Hawai’i volleyball program. Dave walked me out of the McKinley High School gym and into the Rainbow Wahine program that created a lot of opportunities for me. It’s a privilege for me to be able to give back to the University and the game that has given me so much. I look forward to reuniting with the student-athletes and hope that I can help create lasting impressions and unforgettable experiences for them.”