BYU Fights Through Five-Setter To Take Down Hawaii 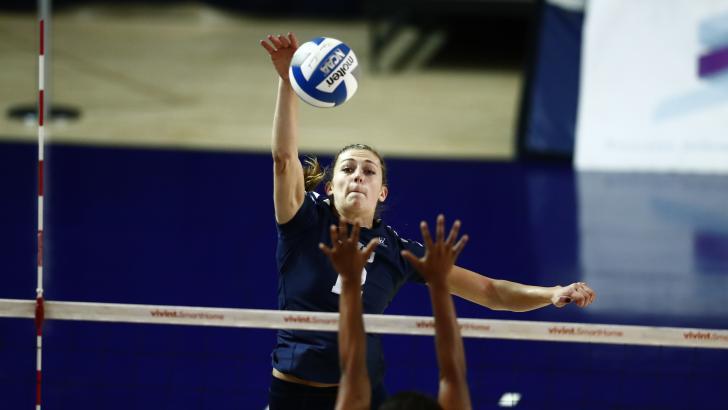 BYU forges through Hawaii to take a five-set win in the opening match of the Outrigger Resorts Volleyball Challenge. Current Photo via BYU Photo/Jaren Wilkey

BYU forges through Hawaii to take a five-set win in the opening match of the Outrigger Resorts Volleyball Challenge.

The first set started off a tight match, but Veronica Jones-Perry slammed down five kills in a row to take a 12-7 lead in the match. This lead continued to grow as BYU extended their lead to finish the first 25-18. The second set was a complete shut down for the Cougars as they quickly rolled to a 15-12 win to take the 2-0 match lead.

This was not it, though, as Hawaii fought back in the third set to forge a comeback 25-16. Hawaii toBYU forges through Hawaii to take a five-set win in the opening match of the Outrigger Resorts Volleyball Challenge.ok the early lead in the fourth set of 5-2 and that was enough to hold off BYU throughout the remainder of the set to force a fifth and deciding set.

Hawaii started the fifth with a point on an Emily Maglio kill, but Jones-Perry swiftly retaliated for a kill to tie it up at 1-1. BYU began to break away with the set as they led 9-6. They finished out the match on a 6-1 run to take the match 15-7.

Leading the BYU charge was Jones-Perry with 27 kills on 56 attempts and six errors for a .375 hitting percentage. In addition, Jones-Perry added seven digs, three blocks and one assist to her tally. McKenna Miller slammed down another 19 kills while Cosy Burnett put down 11. Setter Lyndie Haddock dished out 44 assists and 10 digs for a double-double while also contributing four blocks. From the back row, Mary Lake picked up 17 digs while Danelle Stetler added another 12.

For Hawaii, McKenna Granato posted a double-double with 23 kills and 13 digs while setter Norene Iosia dished out 50 assists and 12 digs for the same feat. Casey Castillo and Maglio each put down another 10 and 14 kills, respectively, while Savanah Kahakai picked up a match-best 20 digs.

Junior outside hitter Veronica Jones-Perryled No. 10 BYU women’s volleyball to a five-set victory (25-18, 25-12, 16-25, 15-25, 15-7) over Hawai’i Thursday night at the Stan Sheriff Center to open up play in the Outrigger Resorts Volleyball Challenge.

“Our outsides were excellent tonight,” BYU head coach Heather Olmstead said. “We also had others make big plays at important times which made tonight’s win a total team effort. It was awesome to play in front of such a great crowd who loves volleyball.”

Jones-Perry led the Cougars with a career-high 27 kills and seven digs. Lyndie Haddock set the team with 44 assists to go with 10 digs for a double-double while Mary Lake had 17 digs. Cosy Burnett contributed five blocks to go with a season-high 11 kills and McKenna Miller collected a season-high 19 kills in the win.

BYU took a 3-1 lead in the decisive fifth set after a Burnett kill. A Kennedy Redding and Haddock block extended the Cougar advantage to four at 8-4. A pair of Redding kills made it 13-6 before a Jones-Perry kill ended the set and match 15-7.

The Rainbow Wahine led 5-3 early in the second set, but the Cougars used a 7-1 run to take a 10-6 advantage. A pair of Burnett blocks and three more kills from Jones-Perry helped fuel an 11-0 BYU rally, extending the lead to 13 at 21-8. A kill from Miller then ended the set for the Cougars 25-12.

Hawai’i once again got off to a strong start in the third set, leading 6-2. Three kills from Miller kept BYU in the set, trailing 8-5. The Cougars got within two, down 9-7, but the Rainbow Wahine stayed ahead scoring the next six-straight points to make it 15-7. A trio of Jones-Perry kills late in the set kept BYU in the mix, but it wasn’t enough as Hawai’i won the set 25-16 on a Cougar attack error.

The Rainbow Wahine took a 4-1 edge at the beginning of the fourth set and maintained their lead at 12-8 after a kill. A Burnett and Haddock block brought BYU back within two, trailing 13-11, but Hawai’i scored six of the next seven points to go up 19-12. The Rainbow Wahine then ended the set on a 6-1 run to force the decisive fifth set with a 25-15 set four win.

The Cougars return to the Stan Sheriff Center Friday, Sept. 8, at 4:45 p.m. HST, facing Nevada in a neutral-site match. Links to live stats for the match can be found on the BYU women’s volleyball schedule page.

The University of Hawai’i women’s volleyball team (2-5) opened the Outrigger Resorts Volleyball Challenge on Thursday night in the Stan Sheriff Center, taking on No. 10 BYU. The Rainbow Wahine fell in a five-set heartbreaker to the Cougars, 25-18, 25-12, 16-25, 15-25, 15-7. The ‘Bows got off to a rough start, but battled their way back to for a fifth set before falling to BYU.

Fourteen players made an appearance on the court as the coaches were searching for options to combat the Cougars. The ‘Bows finally started clicking on all cylinders in the third and fourth sets. Leading the charge was junior outside hitter McKenna Granato who buried a team-high 23 kills. It marked the third time this season that Granato has gotten 20+ kills and she also posted her third double-double of the season with 13 digs to go with three blocks and a service ace. Sophomore setter Norene Iosia also tallied a double-double, her fourth of the season with 50 assists and 12 digs. She also added two service aces and a block. Senior middle hitter Emily Maglio led the team with a .429 hitting percentage and five blocks while tying her season-high in kills with 14.

Hawai’i started the match strong, but with four early ties and two lead changes. But then the Cougars started rolling and scoring in bunches. Including an eight-point run that Hawai’i couldn’t recover from. The Rainbow Wahine lost the frame 25-18.

The Rainbow Wahine however came out of intermission with renewed energy to win, taking the set 25-16 with an 82% sideout percentage. The win was led by Kahakai, who debuted her jump serve which led to a six-point run from the service line including two service aces. Senior outside hitter Kalei Greeley was seen at the serving line for the first time this season and sophomore middle hitter Natasha Burns made her first appearance of the season in this set.

Hawai’i wasn’t done showing that they can compete with the best of the best, winning the fourth set 25-15 with an 80% sideout percentage while the team hit .500 for the frame to force a fifth and deciding set. Hawai’i led the fourth set from start to finish.

The Bows were ready for a fight coming into the fifth set, keeping it close until the fifth point. From there, the Cougars went on scoring runs and never lost momentum. BYU took the set 15-7 and the game 3-2.

Leading the Cougars to their win was junior outside hitter Veronica Jones-Perry with a match-high 27 kills with seven digs and three blocks. Senior middle hitter Cosy Burnett led in blocks with a hand in five of the team total 10.5.

The Cougars marked the fourth ranked team for the Bows to face this year out of seven matches. The Bows proved to be a battle for BYU, who took them to five sets before conceding the match.

The Rainbow Wahine will take on Baylor on Friday, Sept. 8 on the second day of the Outrigger Resorts Volleyball Challenge at 7:00 p.m.