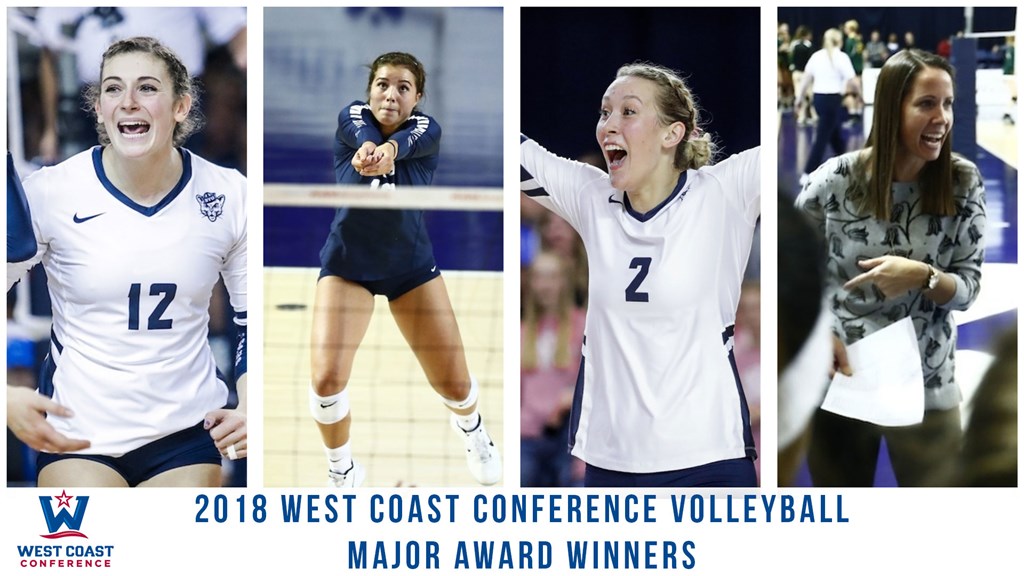 SAN BRUNO, Calif. — After spending the bulk of the 2018 season ranked No. 1 in the country, BYU volleyball swept the West Coast Conference major individual honors and placed five student-athletes on the All-WCC first team.

VB | What do this year's #WCCsports Player, Coach, Freshman and Defender of the Year all have in common?

BYU senior All-American Roni Jones-Perry was voted the 2018 Player of the Year while junior libero Mary Lake secured WCC Defensive Player of the Year honors for the second straight year. Heather Gneiting earned WCC Freshman of the Year accolades for the Cougars, while head coach Heather Olmstead was selected as the Coach of the Year. All four major individual awards – including the all-conference and all-freshman teams – were voted on solely by the WCC’s 10 head coaches.

Jones-Perry was the focal point of the most efficient offenses in the country as the Cougars led the nation in attack percentage (.318) and 15th in kills per set (14.21). The outside hitter averaged 4.71 kills per set, good for 11th among Division I leaders and was fifth in points per set (5.47). During conference play, Jones-Perry averaged 4.69 kills per set on .344 attacking. Jones-Perry is the fourth Cougar to earn Player of the Year honors and the first since three-time BYU All-American Alexa Gray won back-to-back Player of the Year honors from 2014-15.

Lake is the third Cougar to capture Defensive Player of the Year honors and the first libero to do so in consecutive seasons since current AVP professional Betsi Metter won three straight honors (2011-13) for Loyola Marymount. Lake ranked fifth among conference leaders in digs (3.95 per set) while keying one of the league’s top defensive units. In overall matches, Lake registered 359 digs. BYU middle blockers Whitney Young (2014) and All-American Amy Boswell (2015) also earned Defensive Player of the Year honors.

Gneiting made an immediate impact for the Cougars in her debut season for the top-ranked team in the country. The middle blocker led the WCC and ranked 18th among Division I leaders in attack percentage (.393) and was sixth in blocks per set (1.57) to go along with 2.04 kills per set. Gneiting is the third straight BYU student-athlete (fifth overall) to capture top frosh honors, joining teammates Kennedy Redding (2017) and McKenna Miller (2016).

This is the second WCC Coach of the Year honor for Olmstead, who propelled BYU to the first No. 1 volleyball national ranking in conference history. Along the way, Olmstead directed the Cougars to a 27-match winning streak and the program’s second straight 17-1 league slate and a fifth consecutive WCC title. Olmstead owns an overall record of 114-12 (.905) in Provo. BYU earned a No. 4 national seed in the 2018 NCAA Volleyball Championships and will open postseason play Friday, Nov. 30 against Stony Brook.

This year’s first team features just three student-athletes making a repeat appearance. For the first time in conference history 11 of the 12 capturing first team honors will compete in the NCAA Tournament.

Five West Coast Conference volleyball programs will compete in the 2018 NCAA Tournament as announced Sunday on ESPNU. The five teams represent the most for the conference since a record-tying six squads made the 2012 field. In addition, Portland will make its postseason debut when it competes in the 2018 NIVC Tournament beginning Thursday, Nov. 29.