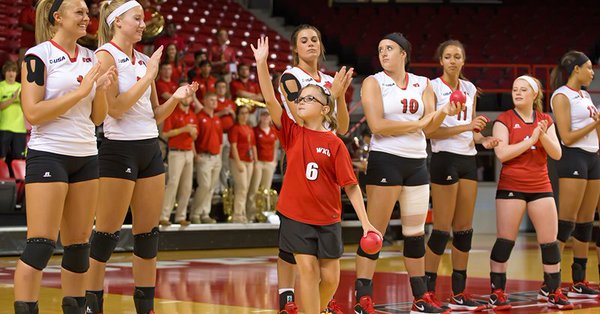 BOWLING GREEN, Ky. – WKU Volleyball returns home Friday night for a rematch of the 2017 Conference USA Championship tilt with North Texas visiting The Hill. First serve is slated to go up at 6 p.m. CT as from E.A. Diddle Arena. Both sides are looking to get back on track after suffering losses their last time out.

Admission for the Friday night tilt will be free. Instead, donations will be accepted in person and online for the Hope For Harlie and Friends of Jaclyn Foundations.

Supporters can also donate to the online fundraiser here.

LOOKING AT THE MEAN GREEN

North Texas enters Friday’s contest with an 8-15 reading on the season which includes a 4-3 mark in Conference USA matches. Last time out, the Mean Green fell to the first-place Rice squad in three sets from Houston.

WKU and North Texas have a few common opponents on the season including Rice, Charlotte and Kansas State. Both sides picked up a five-set victory over the 49ers and suffered losses to both the Owls and Wildcats.

Like the Lady Toppers, the Mean Green lost big pieces from last year’s squad. North Texas returns five of 13 letterwinners while losing half of its starters from last season’s 29-4 squad as well.

The Lady Toppers lead the all-time series with North Texas 20-2 with the most recent meeting taking place in the 2017 Conference USA Tournament Championship match.

After another one-match weekend, WKU Volleyball will hit the road for Texas to take on UTEP and UTSA next Friday and Sunday.