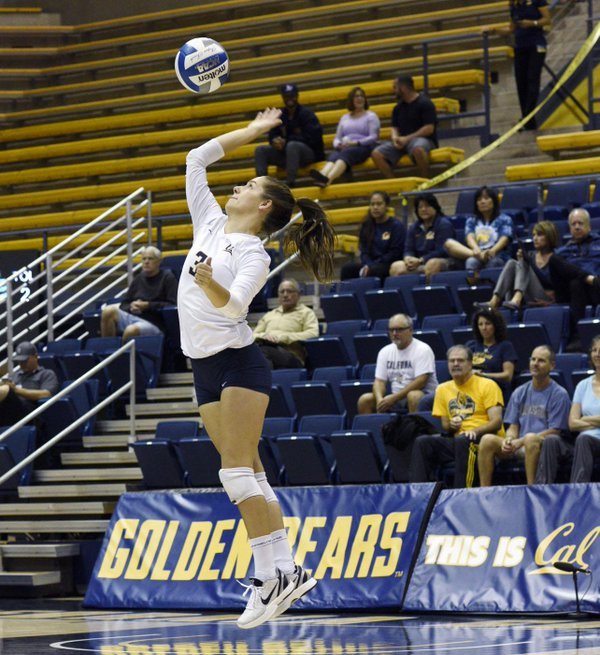 Matt McShane notched his first victories as the head coach of the Cal volleyball team on Saturday at the Molten Classic. If the Bears... Current Photo via Cal Athletics

Matt McShane notched his first victories as the head coach of the Cal volleyball team on Saturday at the Molten Classic.

If the Bears continue their trend of improved serving during the first three matches of the season, he may get a few more.

Cal served up seven aces and held Loyola Chicago to a .108 hitting percentage, then followed up with seven more aces against Seattle in a pair of four-set victories at the Molten Classic at Haas Pavilion.

“Antzela and Carmen have very tough serves, and that’s one-third of our serving,” McShane said. “Then there is some variety with the others. It’s difficult for the other team because they are constantly seeing different things.”

Dempi recorded a career-high four aces in Friday’s season-opening loss to UC Irvine and now has six for the season. She had just four aces in three yearscombined entering the season.

Annevelink, who saw limited playing time during her first two seasons at Cal, hadn’t attempted a serve before this season. She also had an ace against Seattle.

“(McShane) is letting Antzela and I try different serves,” Annevelink said. “He’s not getting on us if it goes out. He’s letting us get after our serve and hit it hard. It creates variety and mixes it up for the other team’s passers. It makes it a lot harder for them out there.”

“When I get into the game, I’m trying to not think about it too much and just get after it,”Annevelink said. “I’m just trying to hit hard and play.”

Annevelink added 12 kills against the Redhawks and senior Caihla Petiprin had five blocks.

McShane took over the program this season after Rich Feller retired following 18 seasons at Cal. McShane was Cal’s associate head coach last season and previously served as an assistant coach from 2005-09.
McShane was the head coach at Air Force from 2005-09.

“There’s going to be a lot more so it’s not like this one is that much more special than it is for (the freshmen),” McShane said. “It was the first win for a whole bunch of people. I think it’s good for the entire team.”

Cal returns to Haas Pavilion next weekend when it hosts the Cal Classic against Dartmouth, Eastern Washington and Texas Tech.