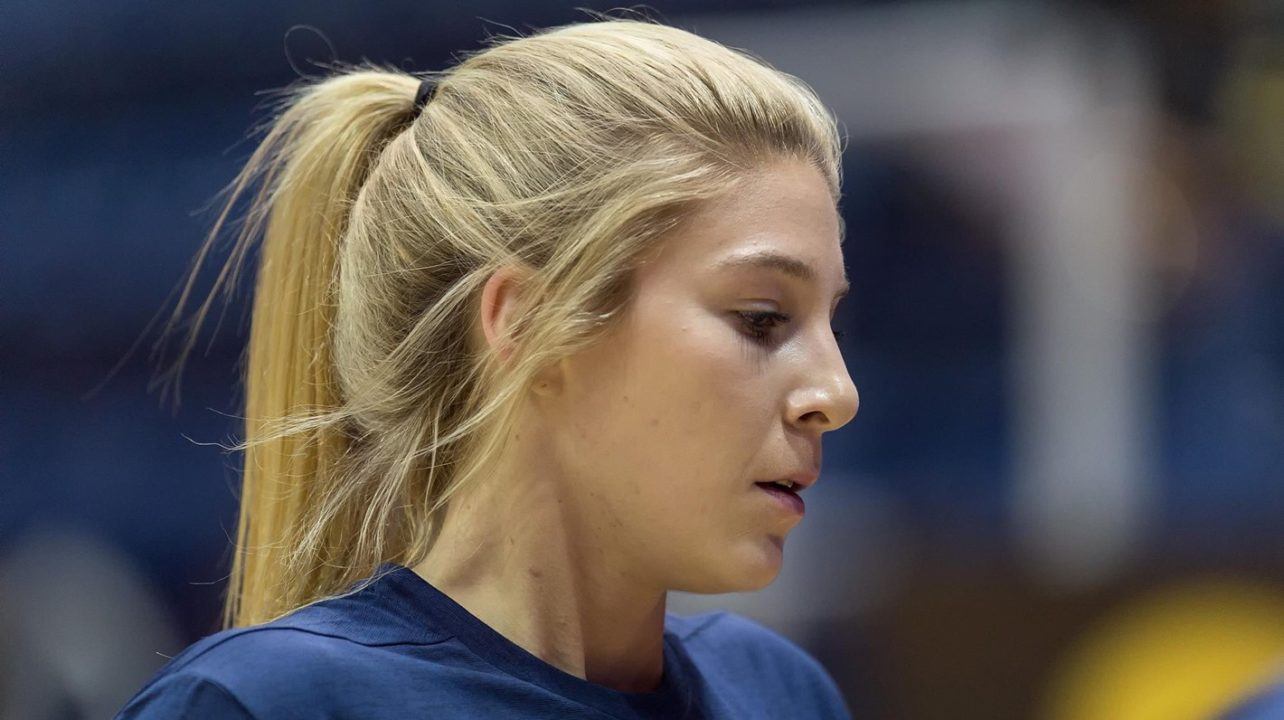 The Cal Golden Bears fell 3-0 to Utah on Friday evening at home, but at the match’s end, the final score was the least-important thing that happened to maybe everyone in attendance except for one person in the building.

Redshirt freshman Savannah Rennie made her NCAA debut on Friday 4 months after undergoing a liver transplant after being diagnosed in the spring of 2015, when she came to Cal, with a rare liver disease called Congenital Hepatic Fibrosis with Portal Hypertension.

The former top-2 national recruit graduated high school early to come to Cal, but still had to wait 18 months to make her debut, and in the second point she saw on the court, she recorded her first collegiate kill. Everyone in the building lost control of their emotions, it seemed, except for Rennie, who knew there was another point to play and knew that she had to do what she could to help her team win.

Video of that point:

“It was an emotional moment,” Rennie said. “I started to tear up a little bit, but I’m still out there on the court and there is another point to play. I couldn’t look at the bench. I could feel them crying. I just had to focus on the next point.”

Her coach Rich Feller said the moment had him choked up as well.

“I got very emotional,” Feller said. “I could barely coach the rest of the match. Every time I tried to say something, I got choked up. I hate losing and I hate the way we played tonight, but the reality is there is a young woman who is now getting to live her dream again. It kind of puts some perspective on it.”

BERKELEY – Savannah Rennie couldn’t cry. There was another point to play, after all.

It didn’t matter that she had just registered her first career kill, less than five months after undergoing a liver transplant. It didn’t matter that everyone around her was standing, applauding, crying. The Cal volleyball team was losing, and Savannah Rennie wanted to do everything she could to help her team.

The Golden Bears fell to Utah 25-23, 25-20, 25-16 on Friday night, but by the time Rennie had finished off an interview with the Pac-12 Network and raced off to Cal’s team meeting room for a postgame meeting, nobody seemed to notice. At long last, Savannah Rennie had played in a volleyball match at Cal – something at one point in time was very much in doubt.

“It was an emotional moment,” Rennie said. “I started to tear up a little bit, but I’m still out there on the court and there is another point to play. I couldn’t look at the bench. I could feel them crying. I just had to focus on the next point.”

Friday marked the culmination of an improbable story – a cruel one that shouldn’t happen to a 19-year old woman. A former top-20 national recruit, Rennie graduated from high school early to join the Cal program during the spring of 2015. But that summer, Rennie became ill, and after extensive tests, it was determined she had a rare liver disease known as Congenital Hepatic Fibrosis with Portal Hypertension. The only solution was to find a new liver.

So she and her mother, Renee, temporarily moved to Indianapolis to be close to the Indiana University Transplant Center, where she had the best chance of finding a match in the quickest amount of time. In May, she got her new liver. By August, she was back in school at Cal and on the court during the first day of practice for the 2016 season.

Gradually, doctors cleared her to do more and more, until finally a few weeks ago she was given unlimited restrictions to play in a match. Head coach Rich Feller searched for the right moment, while Rennie worked to earn that moment.

Finally, with Utah leading 16-10 in the third set and the Golden Bears struggling, Feller decided to see if his team could find something to rally around. He called for Rennie, who sprinted off the bench to sub in to the match. The Bears, as well as the crowd at Haas Pavilion, went crazy.

“I got very emotional,” Feller said. “I could barely coach the rest of the match. Every time I tried to say something, I got choked up. I hate losing and I hate the way we played tonight, but the reality is there is a young woman who is now getting to live her dream again. It kind of puts some perspective on it.”

On her first point at Cal, Rennie almost crushed a Utah overpass for her first career kill. But it was dug up by a Utes defender. She took two more swings and came up empty, and the ultra-competitive Rennie was angry – doesn’t matter she was lying on an operating table less than five months ago

Finally, Rennie converted off a set by Alyssa Jensen, pounding the ball inside the end line.

“I was mad she dug up that overpass,” Rennie said. “She made a great play, but I should have hit it harder. I wanted the ball again after that. I wanted that first one.”

While Feller had told Rennie she was close to playing in a match, she still didn’t know when it would happen. While her emotions swirled during and after the match, she said she was also relieved the moment has finally come and gone.

“It’s a great feeling, but it’s also a relief,” she said. “That first moment is something I will always cherish, but it’s over now. I can finally just focus on playing.”

Utah and California opened the match trading points back and forth until a 3-0 run pulled the Utes ahead 15-11. California countered with a 3-0 run of their own, but a kill from junior Tawnee Luafalemana would end the run, making it 16-14. Leading 19-15, sophomore Jessie Openshaw forced Cal to take a timeout after a service ace, but out of the timeout the Golden Bears rallied off four straight points to tie the first set at 19-19. Back-to-back blocks for Utah made the score 24-21 and Luafalemana would end the first set on a kill, giving Utah a 1-0 lead.

Tied at 4-4 in the second set, Utah would score nine of the next 11 points to build a 13-6 lead. The Utes controlled the momentum of the game and eventually led 20-13 after kills from Luafalemana and junior Adora Anae. After a kill from Anae, California went on a 6-1 run which forced Utah to take a timeout leading 24-20. Anae finished the set, 25-20, with her 13th kill of the match to head into intermission leading the Golden Bears 2-0.

Utah opened the third set with back-to-back kills from junior Eliza Katoa and a kill from Luafalemana to go up 3-0. California would tie things up 6-6, but a kill from Glasker would be the beginning to a 6-0 run forcing Cal to call a timeout trailing 12-6. Cal would keep within six points midway through the frame but Utah would pull away with the win, 25-16.

Anae led the Utes with 15 kills, while also recording seven digs. Glasker notched a career-high nine kills with a .438 hitting percentage. Luafalemana and Katoa also added seven kills each for Utah. Katoa hit a team-best .636 and Luafalemana hit .500 on the night.

Utah finished the match hitting .347 as a team, while limiting Cal to just a .160 hitting effort. Utah had 9.0 total team blocks with Luafalemana leading the Utes at the net totaling 4.0 total blocks.

The Utes will be back in action on Sunday, facing No. 7-ranked Stanford at 1 p.m. PT.