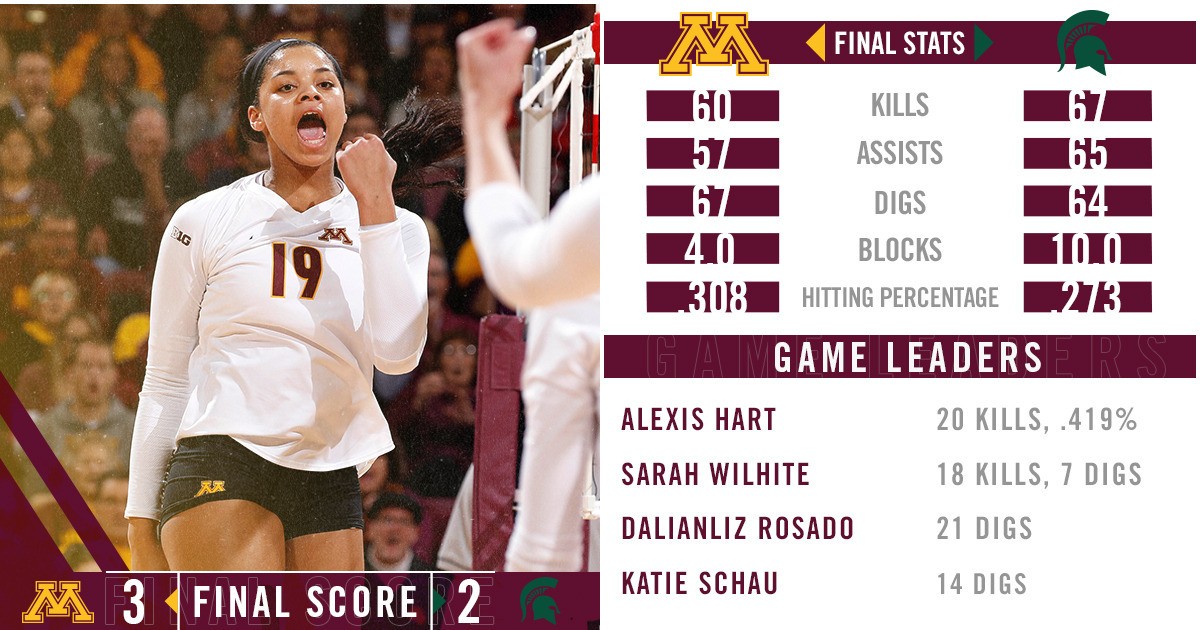 The 2nd-ranked Minnesota Golden Gophers remained undefeated at home on Friday evening with a 3-2 win over the 13th-ranked Michigan State Spartans. The Gophers will put that clean home record to the test as they face their most daunting run of the season, all at home, to close the year with games against Michigan, Nebraska and Wisconsin.

With the loss, Michigan State was officially eliminated from contention for the Big Ten title.

The Gophers won the first two sets in convincing fashion, but the Spartans are playing too well this year to go away that easily. They fought back and won sets 3 and 4 behind .303 and .400 hitting averages, respectively.

The Spartans very-nearly had the game put away with a match-point at 15-16, but the home team rallied and won the last 3 points to seal the game.

The Gophers were led offensively by freshman Alexis Hart. the heir apparent to lead the Gophers next season after the graduation of their superstar trio Hannah Tapp, Paige Tapp, and Sarah Wilhite. Hart had a career-high 20 kills on 43 swings for a .419 hitting average. She will have 3 years to play with setter Samantha Seliger-Swenson (45 assists) into a new generation of Minnesota volleyball.

Dalianliz Rosado had 21 digs for Minnesota defensively – most of the defensive work for the Gophers in this game was done in the back court rather than at the net. They were out-blocked by Michigan State 10-4, with Michigan State getting 6 block assists and 3 solo blocks from Alyssa Garvelink, who just missed a double-double on 13 kills and a .357 average.

Michigan State had 5 players in double digits, and while most of them hit very well, Chloe Reinig struggled with 11 errors on her team-leading 14 kills for just an .083 average.

In spite of losing a game they had at their fingertips, Michigan State coach Cathy George was still pleased with her team’s effort.

“I’m incredibly proud of the fight we showed in coming back from down 2-0 … We stuck with it, battled back, and really took a very, very good team down to the wire. Both of the matches between these teams were tight – and I think that there’s certainly a feeling that we could have pulled it out. We don’t have time to dwell, because there’s a very good Wisconsin team preparing to take it to us again when we get to Madison. This is prototypical Big Ten volleyball – dramatic, and hard-fought on both sides.”

The No. 2 ranked University of Minnesota volleyball team defeated No.13 Michigan State in five sets Friday night, at the Sports Pavilion.

Minnesota will face Michigan at home on Sunday at 1 p.m.

MSU is now 2-2 in five-set affairs this season, and has played two of those against Minnesota – The Spartans took a road win at No. 20 Western Kentucky and fell to No. 1 Nebraska at home. MSU had its six-match winning streak halted with the loss, and falls to 23-6 overall and 12-5 in Big Ten play (fourth place). The second-ranked Gophers earned their seventh consecutive victory to improve to 21-4, 14-3 Big Ten.

MSU trailed 2-0 in the match before rallying to send the match to a fifth set, and the teams had to battle through extra points in the deciding fifth frame – a set which featured 10 tie scores and seven lead changes.

MSU had four players with double-figure kills and two with double-doubles, as Autumn Bailey had 11 kills and 15 digs, and Rachel Minarick had 55 assists, 11 digs, and three kills. Chloe Reinig led MSU with 14 kills and added three blocks, and Alyssa Garvelink had nine blocks (three solo) and added 13 kills, hitting .357.

The Spartans move on to play No. 3 Wisconsin on Saturday in Madision.

“I’m incredibly proud of the fight we showed in coming back from down 2-0 … We stuck with it, battled back, and really took a very, very good team down to the wire. Both of the matches between these teams were tight – and I think that there’s certainly a feeling that we could have pulled it out. We don’t have time to dwell, because there’s a very good Wisconsin team preparing to take it to us again when we get to Madison. This is prototypical Big Ten volleyball – dramatic, and hard-fought on both sides.”

SET ONE: Michigan State fell behind 6-3 in the early part of the frame, and trailing 9-6, a Reinig kill folllowed by a block from the senior pulled MSU within a point, 9-8. Helped by a pair of Spartan errors, MInnesota pulled ahead 14-9, and the home team was hitting .562 (11-1-19). MSU was hitting a respectable .280 at the time, but then committed three consecutive errors to allow the Gophers to open up a five-point lead, 19-14. Three consecutive kills – one by Seliger-Swenson and a pair from Molly Loman – pushed the UM lead to 23-16, and MSU called its second time out. The Spartans came out of the break with a soft kill into the back left corner by Reinig, but a kill by Loman – her fifth of the frame – pushed the Gophers to set point, and Alexis Hart closed it out, 25-17. Minnesota hit .359, with Loman leading her team with the five terminations. Alyssa Garvelink had a pair of blocks and four kills, as MSU hit .171 (12-5-41). Minnesota had 22 digs to MSU’s 18, as Autumn Bailey had six in the first frame.

SET TWO: The Gophers opened up the second frame with a 4-0 run, but MSU countered with back-to-back kills by Reinig and Bailey. After MInnesota went back up by four (6-2), MSU used a 4-0 run to tie it up on kills by Reinig, Toliver, and Bailey. Trailing by four (14-10), the Spartans used a 4-1 run capped by a Garvelink block to trim it down to one at 15-14, but Minnesota pushed back with three straight points to re-establish a four-point cushion with a block and kill by Alexis Hart. Hitting errors by MSU helped the Gophers take a seven-point advantage (21-14). A thundering termination by Hart from the left side made it 23-16, and a block by Lohman and Hannah Tapp made it nine (24-16). The Spartans twice staved off set point, but a kill by Hart sealed the set victory for the second time on the night. Bailey led MSU with four kills and Reinig added three, while Garvelink had three blocks. Abby Monson had six digs, but the Spartans had 10 errors and 10 kills on 38 swings, while MInnesota hit .219.

SET THREE: MSU had its first lead of the night on a Toliver ace early in the frame, and used seven kills on 10 swings (7-1-10) to open up an 8-5 lead in the set, with two kills each from Toliver and Garvelink. Out of its timeout, consecutive Hannah Tapp kills followed by three MSU miscues allowed the Gophers to go up 10-8, but MSU halted the run with a Fitterer termination, and after a Minnesota error, Fitterer delivered back-to-back aces to give the Spartans back the lead, 12-10. The teams traded leads – neither going up by more than two points and with the Spartans trailing 15-14, MSU got a kill and a block – both from Garvelink – to pull ahead by one; a Minnesota error made it 17-15 MSU, and the Gophers called a timeout. A big block by Kranda and Garvlink, followed by a Toliver ace, gave the Spartans their biggest lead of the night at 19-15, but a Sarah Wilhite kill got the sideout for the home team. The Spartans maintained their four-point lead until a Fitterer tool off the block pushed it to five at 23-18. Back-to-back kills for the Gophers – from Hart and Wilhite – made it a three-point game. Fitterer and Hart traded kills for their teams to make it 24-21, and Reinig ended it with a big swing her eighth kill of the night. Garvelink added another two blocks and five kills to help MSU win the set, and the Spartans hit .303 in the frame, compared to .240 for the Gophers, who were led by Wilhite’s five terminations.

SET FOUR: MSU opened up an early lead and pushed it to 9-3 on a kill by Bailey, and she and Fitterer teamed up for a huge stuff on Hannah Tapp to make it 10-3. The Spartans maintained their seven-point lead through 13-6, at which point the Gophers called their second timeout of the frame. MSU’s largest lead was 16-8, and with a 17-10 lead, a Hart kill trimmed it back to six with a sharp-angled shot. Bailey got the sideout immediately, then got a kill off the block after a lenghty rally, and followed with a second kill – her ninth of the night – to make it 20-11. MSU’s largest lead was 23-12, but Gopher run made it 23-15, and the Spartans called a timeout to regroup. The Gophers scored three straight out of the break to trim it back to five at 23-18, but Bailey ended an overall 6-0 Gopher run with a kill to get the Spartans to set point. A service error by the Spartans made it 24-19, but Fitterer closed it out with her 10th kill to send it to a fifth frame. Bailey had five kills to lead MSU, while Garvelink and Fitterer each had three.

SET FIVE: MSU was determined to not allow the late surge from the fourth set for the Gophers continue and took a quick 2-0 lead, and after the Gophers tied it 4-4 on a kill by Seliger-Swenson, MSU had back-to-back errors, and called a timeout. Wilhite extended it to three for the home team with a tip over the block (7-4), and then gave her team a four-point lead on the crossover with a kill off the block. Kills by Fitterer and Reinig pulled MSU within 9-7, but a service error gave the Gophers back a three-point lead. Reinig re-entered the game and pulled MSU back within 10-9, her first kill a big swing and her second a tip off the block. Minnesota called timeout, and Fitterer served up an ace to tie it at 10-10, and Garvelink and Minarick blocked wilhite to give MSU its first lead since 2-0, and MInnesota called its second time out. A service error and a call in the net after the timeout swung the lead back to the Gophers at 12-11, but Reinig evened it up with a kill off the block. The teams traded kills twice more, and a swing that went wide by Hannah Tapp was called a touch at the net, and the home team took a 15-14 lead. The teams traded points until the Gophers took a 17-16 lead, and eventually closed it out as a Spartan attempt sailed long to secure the match.
TOP PERFORMERS

Chloe Reinig led MSU with 14 kills and added three blocks.
Autumn Bailey notched her eighth double-double of the season and second straight with 11 kills and 38 digs.
Alyssa Garvelink had 13 kills, hit .357, and had nine blocks, including three solo.
STATS AND STORYLINES

MSU split its season series with the Gophers after a five-set victory earlier in the year at Jenison Field House.
The Spartans had their six-match winning streak snapped, their second-longest winning streak of the season..
MSU had 10 blocks compared to four for the Gophers, who entered the weekend as the top-blocking team in the Big Ten.
MSU’s 64 digs is a just shy of the season-best 66 the Spartans posted vs. Michigan last Saturday..
Holly Toliver had five digs, four kills and four aces, one short of her career best.
Abby Monson had 19 digs along with six assists.