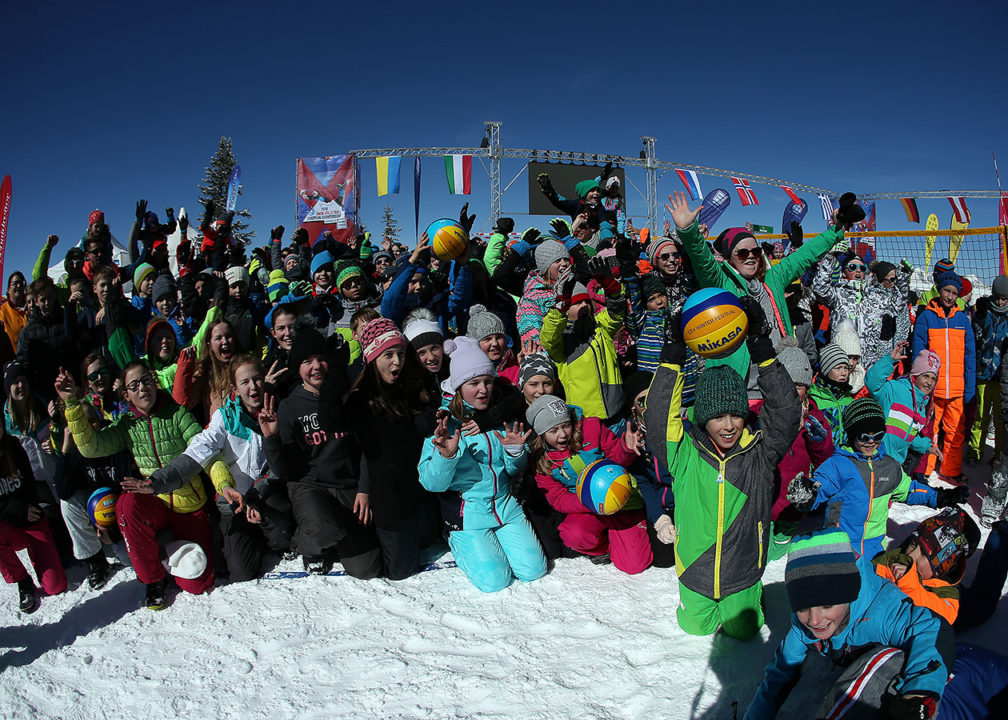 In keeping up with FIVB’s President Ary Graça’s request for the growth of Snow Volleyball, the CEV provided a camp for more than 400 kids prior to the start of its inaugural CEV Snow Volleyball European Championship. The kids were accompanied by 15 coaches who shared their passion for volleyball, including 2013 European Beach Volleyball champion Stefanie Schwaiger and former Brazilian Beach Volleyball star, Pedro Cunha, who are one of may FIVB’s official ambassadors for the new modality. Participants ranged from kids aged 3 to 16 from as many as 10 different schools, with a focus on students aged 6 to 10.

“It is my first time playing Volleyball on the snow as I never did that before but I am absolutely enjoying it. I seem to have fallen in love with it from the very first moment.” – Pedro

“It has been an absolutely wonderful experience to spend some quality time with these children and I now look forward to the start of the tournament, hoping that a big crowd will come together and will be supporting the athletes competing here.” – Stefanie

All participating kids received a voucher inviting them to attend Sunday’s semi-final and medal matches, where they will receive an exclusive gift – an official t-shirt to take home as a souvenir from the first-ever Snow Volleyball European Championship.

🤚🏼 between 🇧🇷’s @phcunha and a young, keen and enthusiastic snow volleyballer at Kids Day in the Austrian mountains ahead of the inaugural #EuroSnowVolley 🏐❄️🇦🇹