Charlotte Picks Up Two C-USA Players Of The Week Honors 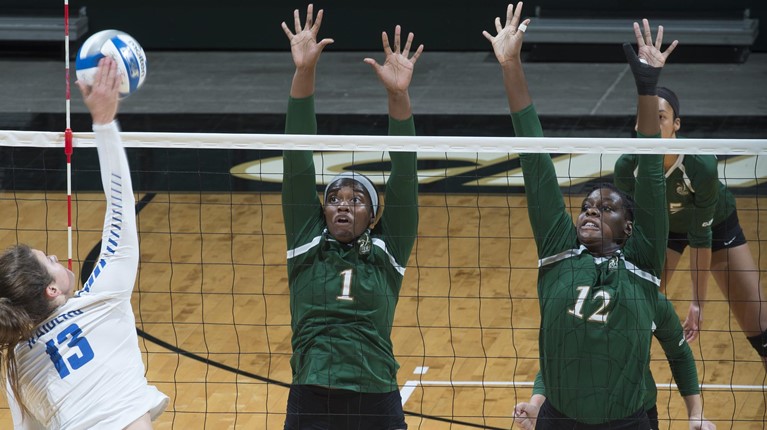 C-USA Offensive Player of the Week – Tatyana Thomas, Charlotte, Jr., Suffolk, Va.
Taylor crafted a career week as the junior led Charlotte to a 3-1 mark, earning all-tournament honors. The middle hitter slashed a 17-year old school record for blocks in a four-set match, second-most in the NCAA this season, with 11 against UNCG. She also taped 11 kills and a .526 hitting percentage, both season highs. Thomas set a new career high with 19 kills and hit .469 while adding six more blocks against Bethune-Cookman. For the four-match week, Thomas hit .512 and averaged 3.12 kills/set, racking up 50 total kills. In addition to her 67.5 points, she compiled 27 total blocks at a 1.69 blocks/set mark.

C-USA Defensive Player of the Week – Yumi Garcia, Charlotte, So., Cerejeiras, Brazil
Garcia was stellar for the 49ers once again, registering 101 digs on the week as she continues to lead the nation and C-USA with 206, averaging just under 26 digs per match. She captured her second-straight all-tournament nod with a third 30-dig match as her 35 on Tuesday reached a career high. The sophomore averaged 6.31 digs/set, adding 13 assists and two aces.

C-USA Setter of the Week – Jessica Lucas, WKU, Jr., Seymour, Ind.
Lucas continued her reign as the facilitator for the Lady Topper offense this week. The junior penned her second double-double of the season in the WKU’s four-set loss at Louisville with 35 assists and 10 digs. Her week saw a .318 hitting percentage on 19 kills, in addition to 10.54 assists/set, 1.69 digs/set and five blocks. Lucas was vital in WKU’s .324 hitting clip en route to a 3-1 showing in nonconference action.

C-USA Freshman of the Week – Chandler Marshall, Fr., Houston, Texas
Marshall racked up 53 kills, 42 digs and seven blocks on the week for the Golden Eagles, including three double-double performances in an effort to notch all-tournament recognition. The freshman stepped up in the squad’s sweep of Alabama on Saturday, downing 15 kills, which were one off two previous career-highs that were both accomplished in five-setters.