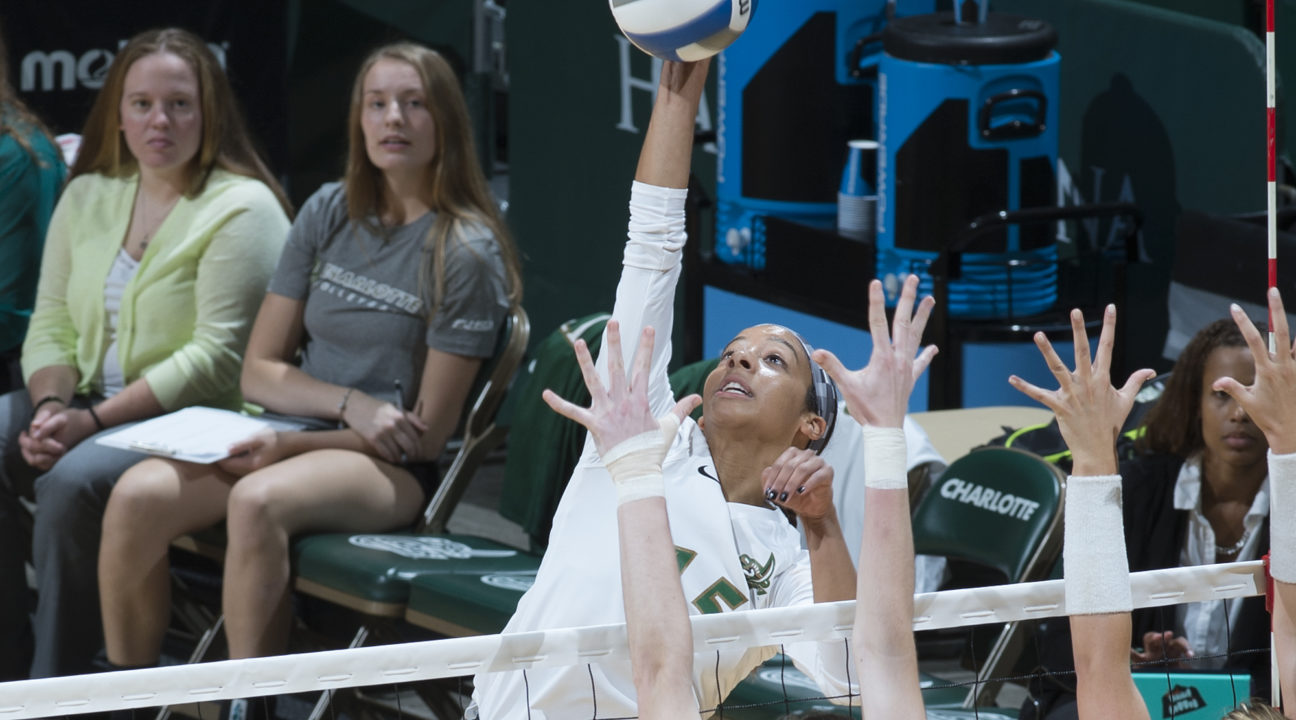 A school-record win streak of 10 will accompany the Charlotte volleyball team as they open up Conference USA play Friday and Sunday inside Halton Arena.  Current Photo via Charlotte Athletics

A school-record win streak of 10 will accompany the Charlotte volleyball team as they open up Conference USA play Friday and Sunday inside Halton Arena. The Niners will host Marshall in the opener at 6:00 p.m. Friday before welcoming the league’s defending champs in WKU at 1:00 p.m. Sunday. Friday’s match vs. Marshall will air on beIN Sports beginning at 8:00 p.m. on tape delay with a full listing of how to watch below.

Charlotte (13-3) has put together one of the best starts in school-history winning the first of their 10 back on September 2nd vs. North Florida. The streak includes a streak of 14-straight sets without dropping one having lost only four sets during the entire 10-gamer. The 49ers have been represented by player of the week honors and all-tournament selections with the last coming to Janell Sparks who won the league’s offensive award and MVP honors at last weekend’s George Mason Classic. Tatyana Thomas and Sydney Rowan, both player of the week’s this season, were also named to the all-tournament team in Virginia.

Rowan leads the team with 198 kills on the year followed by Sparks’ 176. Thomas leads C-USA and stands fifth in the nation with 75 blocks to go along with her 106 kills and team-leading .464 hitting percentage. Jocelyn Stoner and Janelle Curtiss currently rank second and third behind Thomas with 67 and 61 total blocks. Charlotte as a team, continues to lead the country with 186 total blocks. Yumi Garcia has also led the country from day one with 339 digs on the year.

“We’re exhausted and elated,” began Head Coach Karen Weatherington. “We’re super excited about our non-conference play and really pleased with the challenges we saw. I like that we have seen some accolades, but our team knows it’s just for the moment. It’s time for the real work to get started now.”

Marshall (5-10) begins league play winners of two-straight having topped Furman in four and USC Upstate in a sweep last Saturday. Half of Marshall’s losses have come against power five competition in Missouri, Michigan State, Maryland, Tennessee and West Virginia while picking up a sweep of Virginia Tech back on September 8th.

Jac’cara Walker leads the Herd with 203 kills followed by Madison Hill’s 137 and Taylor Pelton’s 100. Madelyn Cole paces the offense with 450 assists while a team-leading 185 digs comes from Jessa Long. Marshall has owned the head-to-head rivalry since Charlotte re-joined Conference USA winning six of their seven previous meetings. Five of those seven have gone the distance resulting in four 3-2 victories for the Herd.

WKU (13-2) opens league play at Florida Atlantic before coming to Charlotte for Sunday’s matinee. The Hilltoppers’ only pair of losses this season came in back-to-back matches at Louisville and vs. Illinois. WKU was once again the preseason favorite for the fourth-straight year having won the C-USA Tournament in each of their three years in Conference USA. All three have resulted in trips to the NCAA Tournament as C-USA’s lone representative. WKU has swept all three previous meetings with the 49ers.

The Hilltoppers are led by Alyssa Cavanaugh’s 210 kills and .380 hitting percentage. Rachel Anderson is right behind with 166 kills hitting at a .385 clip. As a team, WKU sports a .324 hitting percentage entering the weekend.

“We’re always impressed to play WKU,” finished Weatherington. “They have been a consistent, overall great program for the last 20 years no matter what conference they have been in. We know it’s about a battle and they have some great players. We’re going to give them our best.”