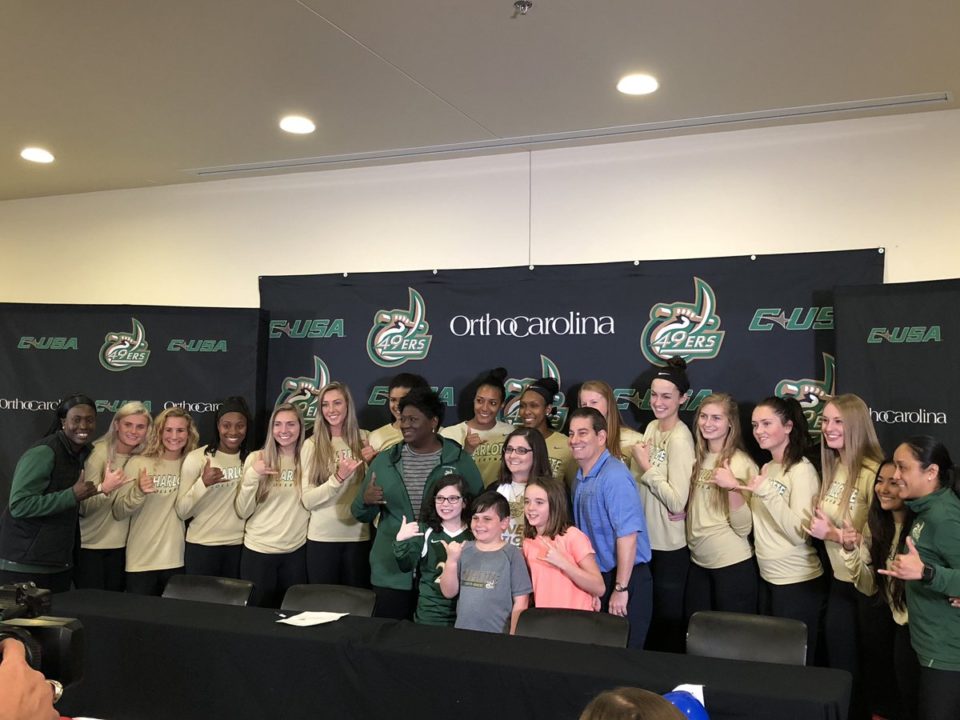 The Charlotte 49ers volleyball team welcomed Daniella, a local 10-year-old girl from Matthews, as the newest member of the program on Tuesday afternoon. Daniella, who was diagnosed with Complex Regional Pain Syndrome two years ago, comes to the Niners from Team IMPACT. Current Photo via Charlotte Athletics

CHARLOTTE, N.C. – The Charlotte 49ers volleyball team will welcome Daniella, a local 10-year-old girl from Matthews, as the newest member of the program on Tuesday afternoon. Daniella, who was diagnosed with Complex Regional Pain Syndrome two years ago, comes to the Niners from Team IMPACT.

“We are thrilled to have Daniella join the 49er volleyball program as a 2018 addition,” began Head Coach Karen Weatherington. “She’s the type of player every team wants. Daniella exhibits the courage, toughness and has shown she can overcome adversity.”

Two years ago over winter break, Daniella started experiencing pain in her foot and doctors couldn’t figure out why. After months of testing, Daniella was diagnosed with Complex Regional Pain Syndrome, a condition which effects the central nervous system and produces pain throughout the body for unknown reasons. Daniella has been to pain management clinics to help her condition, but often times doesn’t know what triggers it.

Daniella is a fighter, highly intelligent and a curious young lady. A true “Gryffindor,” she crushes math competitions, goes to STEM camp and is determined to one day work for NASA. Being an incredibly loving and thoughtful 10-year-old, Daniella spends a lot of time donating and giving back. She has donated her hair to Wigs for Kids twice already and recently organized a clothing drive which ended up donating 18 bags of clothes to the local Crisis Assistance Ministry.

Daniella is always ready to make friends and puts 100% into everything she does. When she isn’t playing guitar or lacrosse, she can often be found running around with her younger brother Howie (7) showing him the ropes! Her smile lights up any room and her unbreakable spirit and ability to put others needs before her own make her the perfect kind of teammate for the 49ers. She lives by her favorite saying “Keep on Going with a Smile.”

“Her position on the team motivates her teammates to play and work hard,” finished Weatherington. “We are certainly happy to have her on the roster.”

This inspiring young lady was introduced to Niner Nation on Tuesday, October 23rd with a “press conference” and “signing” at 1:30 p.m. The Niners will welcome Daniella, younger brother Howie and parents Michael and Melissa to a multitude of volleyball events, activities and matches as an official member of the team.

We have pen to paper! Daniella is now officially a 49er and nailing her introductory press conference! #GoldStandard pic.twitter.com/5z4NXF9yg9

After a GREAT session with the media for her press conference, Daniella will grab some lunch and be on the court for a 2:30 practice coming up!

Come see Daniella on Friday night as she cracks the starting lineup for our Dig Pink match at 6pm! #GoldStandard pic.twitter.com/ZjOmGGfhCi