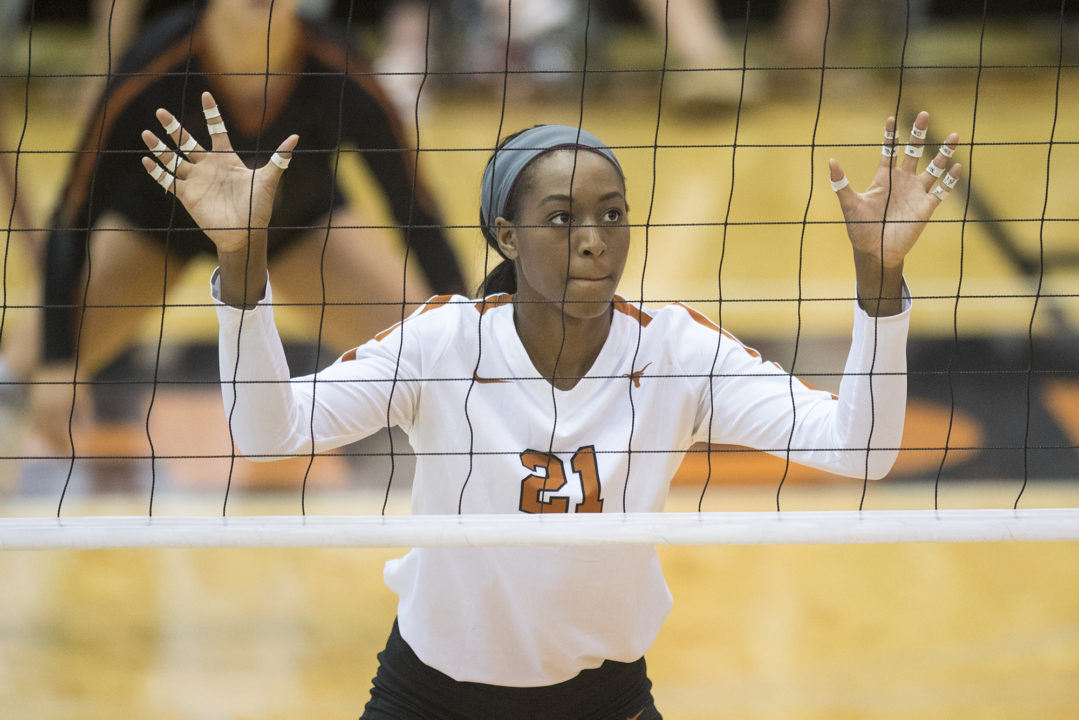 During the team’s come-from-behind 3-2 win over 11th-seeded Utah, Texas senior middle blocker Chiaka Ogbogu became the school’s all-time leader in total blocks. She ended the game with 534, which jumped her past Errica Hibben for tops in the all-time category. Ogbogu wasn’t even in the school’s top 10 before a monster senior total of 9 solo blocks and 162 block assists lifted her to the top of the heap.

Note: all-time career blocks leaders are not posted by the NCAA, because they are still researching possible leaders from prior to 2001. Texas’ record book reaches back to the beginning of NCAA volleyball, however.

A video of the record-breaking effort:

While Ogbogu’s offensive numbers are down a little this year (she has 266 kills, off 315 in her career-high junior season), her 171 total blocks, with at least 1 match left to play, are already 35 more than both her sophomore and junior seasons, where she had 136 blocks in each.

The Longhrons’ offensive reliance on Ogbogu has also picked up toward the end of the season and into the NCAA tournament. She’s averaged 3.4 kills-per-set over the team’s last 7 games (including 3 tournament wins), as compared to just 2.3 kills-per-set in the team’s prior 22 matches this season. That includes an efficient opening round game where she had 11 kills in 12 attacks for a .917 hitting percentage. She had a season-high 16 kills in the 5-set win over Utah (hitting .433) to go with 3 block assists and 1 solo.

Her 1.33 career blocks/set also currently has her 2nd in the program’s history. Mathematically, her average can’t drop her to 3rd in that category, and it would take an unrealistic effort for her to catch 1st, so she should finish her career in that same spot.

Ogbogu is also the school’s all-time leader in block assists, sitting currently 34 better than any other Longhorn ever. Her blocks have historically leaned heavily toward assist efforts as compared to most at her statistical level.

Texas is now playing with both their all-time blocks leader and all-time digs leader Cat McCoy as they prepare for a 2016-national-championship-game rematch against Stanford.