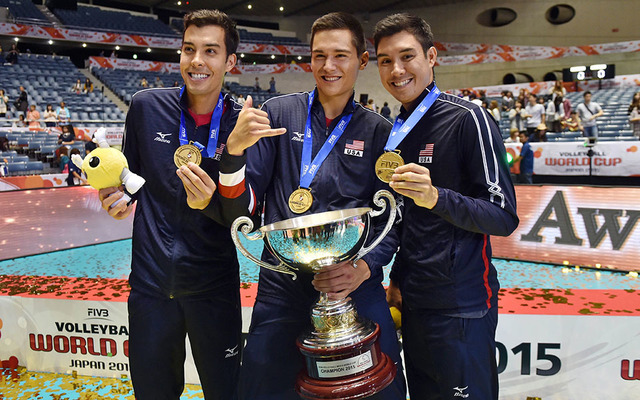 Kawika Shoji, Micah Christenson, and Erik Shoji took the time to hold a youth clinic in Hawaii. It is the second edition of the Shoji Christenson Volleyball Clinic and it will benefit Special Olympics Hawaii.  Current Photo via FIVB

Hawaii is the home to some impressive volleyball history and three of the members of the United States Men’s National Team. Micah Christenson, Erik Shoji, and Kawika Shoi all grew up in Hawaii before playing their collegiate volleyball in California. Though they all played professionally in Italy last year, the still found time to make it home and give back to the youth in their community.

On Monday, June 16 they took time out of their short breaks from the national team to host the second annual Christenson Shoji Volleyball Clinic on the campus of Iolani High School. The clinic was open two players from eighth through twelfth grades and was broken up in to two separate sessions. The first session was for the eigth and ninth graders. The later session was for the sophomore through seniors.

The clinic centered around setting and defense. The coaches wanted to narow the down the focus and provide more specific instruction for the players. It was at a much smaller gym than last year’s clinic at Kamehameha High. The smaller  gym provided a chance for more intimate setting, and the parents even got involved.

A portion of the proceeds from the clinic are going to benefit Special Olympics Hawaii.

It’s an ace of a night at the 2nd Annual Christenson Shoji Volleyball Clinic! Mahalo @kshoji7 & @mchristenson5 for supporting our athletes. pic.twitter.com/NdYA3LRouS

The United States National Team will be training in Hawaii to get ready for the 2018 World Championships. The United States is coming off of winning the bronze medal at the Volleyball Nations League.

A team practice that is open to the public will be held on Thursday, July 26 at 9:00 a.m. at Iolani’s gym. There will also be intrasquad scrimmages at 7:00 p.m. on Friday night at Kamehameh and at 6:00 p.m. Saturday night at Kalani High School.