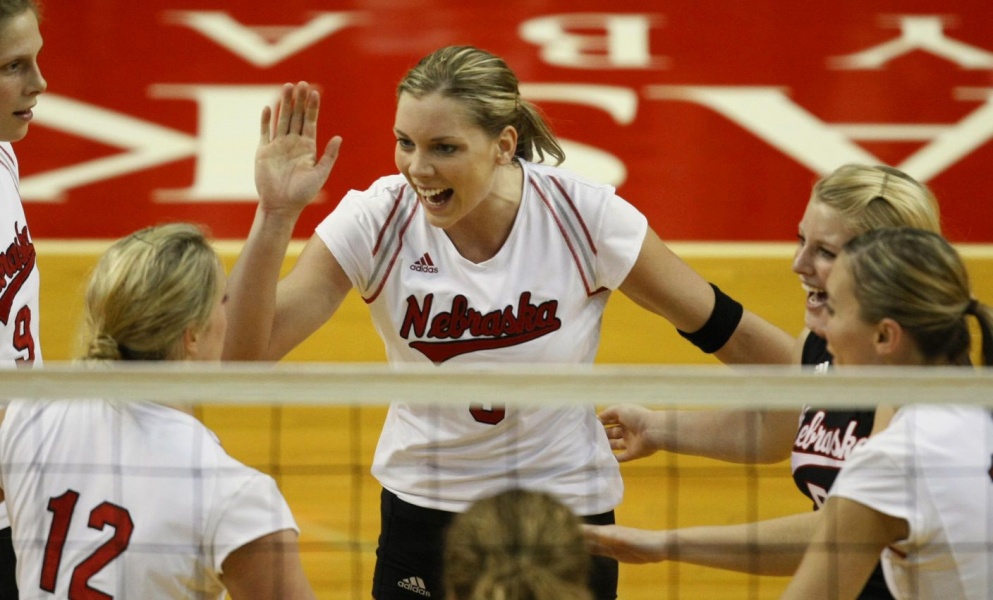 Two volleyball players and 1 volleyball coach will be among the 19 inducted in September. Archive Photo via Nebraska Athletics

2005 AVCA National Collegiate Player of the Year Christina Houghtelling, now Christina Hudson, is one of 12 athletes who will be inducted into the Nebraska High School Hall of Fame in September. They will join 5 coaches, 2 contributors, and one official in the class of 2018.

Playing as an outside hitter, Houghtelling had impressive defensive statistics. She led the team in digs in 2007 (and aces as a freshman in 2004), and her digs-per-set number of 3.95 from that year still ranks as the 8th-best single-season performance in that category in Nebraska history. She also recorded 1,009 career kills in her Nebraska career.

In high school, she was a four-year letterwinner in volleyball, basketball, and track at Cambridge High School. She won three all-class gold medals in track, and earned all-class all-state honors in volleyball and basketball. She was also named the Lincoln Journal Star girls athlete of the year.

She’s one of two volleyball players in this year’s class. Janet Kruse (now Janet Sellon), who graduated from Blair High School in 1987, was a three-year starter for Nebraska, and was their first three-time All-American in women’s volleyball. She still ranks 11th on Nebraska’s all-time lists with 1,269 kills, 27 years after her NCAA career ended, and her 33-kill output in 1989 versus Kentucky is tied for the 8th-best single-game kills total in Nebraska history.

Also being inducted is Omaha Marian volleyball coach Rochelle Rohlfs, who has won 4 state championships, 8 state finals appearances, and 718 victories. Omaha Marian has qualified for the state tournament in 21 of her 26 years as head coach.

All 19 inductees will be recognized in a ceremony at Lincoln East HIgh School on September 23rd. The full class can be seen here.