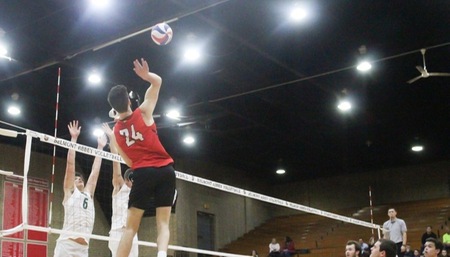 Liam Maxwell led a trio with double-figure kills and Brennan Davis added 43 assists, lifting Belmont Abbey to a 3-1 (25-20, 25-21, 20-25, 25-23) victory Tuesday night in the quarterfinal round of the 2018 Conference Carolinas Men’s Volleyball Championship. With the win, the fourth-seeded Crusaders advance to meet No. 1-seed King in the semifinals on Friday.

Maxwell had 18 kills, while Pierce Pliapol tallied 11. Gavin Schaffer rounded out the trio with 10 kills, while earning a team-high seven digs. Jackson Gilbert of North Greenville led all attackers with 20 kills and a .441 hitting percentage.

North Greenville (13-16) came out strong, opening a 14-10 lead midway through the first set. The Abbey (13-15) tallied three straight points to cut the lead to one, then tied the score at 16-all. After each team tallied a pair of points, BAC broke the 18-18 deadlock with four straight. The teams traded points twice to set up set point, which Belmont Abbey closed, 25-20, with a Brian Long kill.

In the second set, the hosts broke a 9-9 tie with five straight. NGU tallied three in a row to cut a 15-10 deficit to 15-13, but then committed two errors to trail 17-13. From there, The Abbey’s lead was never less than three, with Pliapol putting his squad up 2-0 with a kill to end the second set.

North Greenville would not go quietly. It broke a 4-4 tie with back-to-back points and never trailed again. Leading 15-13, the visitors scored four straight to create separation and forced a fourth set, 25-20.

The final set was even most of the way, with 18 ties and nine lead changes. North Greenville broke an 8-8 tie with two straight, but Belmont Abbey gained three in a row for an 11-10 advantage. The teams were tied at 10, 11 12, 13 before The Abbey tallied three straight points to lead 16-14. But NGU caught back up at 17 and things were even again at every point until 23-23. That’s where The Abbey prevailed with kills by Long and Pliapol sending it to the conference semifinals for the second time in the program’s six-year history.

The semifinal match is set to start at 5 p.m. in Bristol. No. 2 Barton and No. 3 Mount Olive meet in the second semifinal.