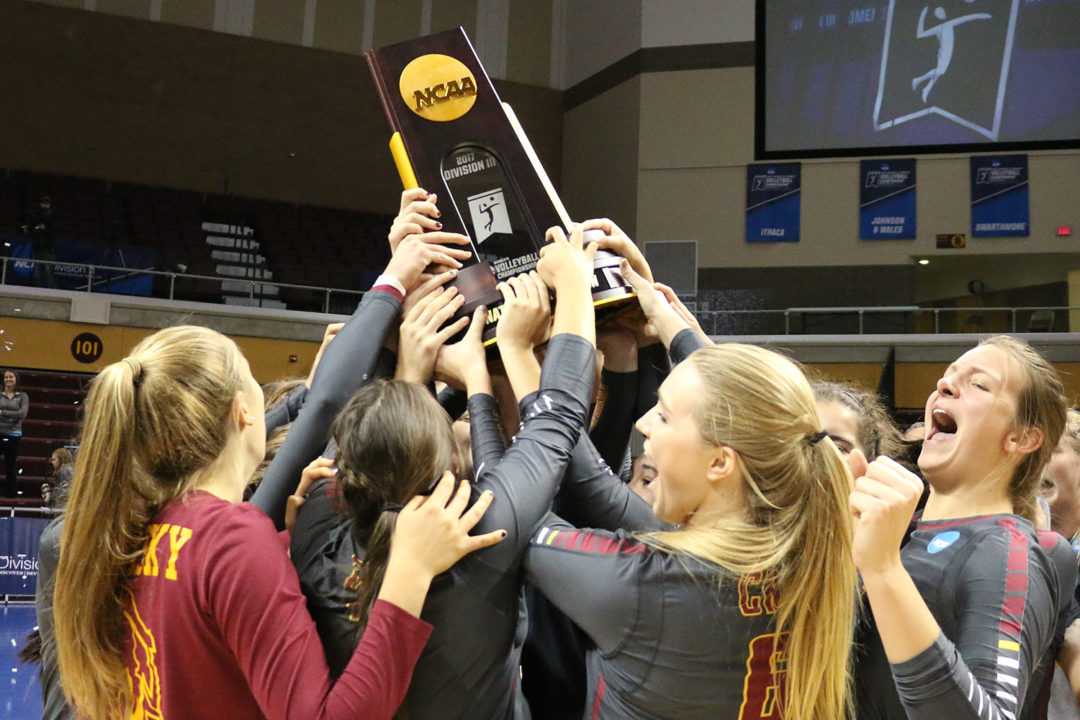 Chief among those pillars is senior opposite Margaux Arntson. She led all players in the championship game with 18 kills, adding in 3 block assists for 19.5 points. Those 18 kills came on just 27 swings, for a 66.7% success rate and a .519 hitting percentage. In the final game of her season, and college career, she had her 2nd-highest scoring output of the season – behind only a 26-point performance in September (in a loss).

The First Team All-American sat out the team’s last 3 games heading into the NCAA tournament – including the semi-finals and finals of the SCIAC Conference tournament, and the team swept all of those games. In fact, they entered the NCAA tournament on a run of 7 consecutive sweeps.

“The biggest thing for me, was just saying to myself, ‘I belong here,’ and having that confidence,” said Arntson of her mindset during the match. “To really make it to this level, at some point you have to forget your level of volleyball and just have the confidence. I knew they were going to key on me and Shelbi (Stein), but I didn’t let that scare me. The biggest thing was to stay confident.”

That rest paid off for Arntson in the tournament. She had 92 kills (4/set), hit .388, and had 13 block assists in the team’s 6 NCAA tournament games. She was named the Player of the Tournament for her effort.

In the losing effort, Wittenberg hit .131 with just 1 player with double-digit kills: Maddie Fischer, who had 13 (6 errors, 40 attacks, .175 hitting percentage). Fischer is the team’s lone senior, as Wittenberg will return the vast majority of its roster next season.

GRAND RAPIDS, Mich. – The Athenas completed their first sweep in the NCAA Tournament on the biggest stage, defeating the Wittenberg Tigers in straight sets 3-0 (25-18, 25-19, 25-22) to win the first ever National Championship in program history.

It was a heavyweight battle all night long, but the Athenas had something the Tigers did not, Margaux Arntson (CMC). Arntson put on a show with 18 kills and an astounding .519 hitting percentage on the night to lead the Athenas to the straight-set victory in the National Championship. With the Championship victory, the Athenas finish an incredible 2017 season with a 31-5 overall record, the most victories in a single-season in program history.

As coach mentioned, it was quite the year for the Athenas. CMS suffered some tough losses against ranked teams early in the year and following a 3-2 loss against Chapman on Sept. 23 the Athenas owned a 9-5 overall record. A 3-2 victory over Occidental the next day was the beginning of a stretch that will not soon be forgotten in Claremont. CMS rattled off 14-straight victories to end the regular season with a 23-5 record.

After sweeping through the SCIAC Playoffs and picking up three 3-1 victories at the Georgetown Regional, the Athenas arrived in Grand Rapids, Mich. battle-tested while also boasting a 19-match winning streak. Victories over No. 16 Gustavus Adolphus and Ithaca pushed the Athenas to the Championship Match against the Wittenberg Tigers.

The Tigers entered the National Championship will momentum of their own after handily taking out the Calvin Knights on their home-floor in straight-sets in the semifinals.

That Wittenberg momentum built on Friday night, would be no use Saturday as the Athenas came out swinging and playing free.

“It seems a little counter-intuitive, but we actually felt like there was a big pressure lifted off our shoulders by just getting to this final match,” said senior setter Clara Madsen of the pressure of playing in a National Championship. “We made it as far as we could, to the last possible day of the season, and for us we felt we belonged here and now it’s just about enjoying it, living in the moment and having fun.”

“I would have to agree with Clara,” added Vlasich. “Tonight was the calmest I’ve felt in the last four years on the bench with this group.”

That freedom from the Athenas and their coaching staff allowed CMS not to panic when they trailed 10-9 midway through the opening set. CMS proceeded to go on a 7-2 run to take a 16-12 advantage. The lead for the Athenas hovered between three and four points for the rest of the set.

Leading 21-18, Melanie Moore (CMC) floored a kill and Shelbi Stein (CMC) connected on back-to-back swings to help CMS close out the set, 25-18, and give the Athenas the 1-0 lead in the match.

Four different Athenas collected kills during an 8-5 CMS run to open the second set. The Tigers quickly ripped off the next five points to turn the tables and take a 10-8 lead. Wittenberg would hold the lead into the middle portion of the set, but with the Tigers leading 16-15, CMS started a 7-1 streak with a kill from Isabelle Taylor (CMC).

During the streak, Arntson collected a pair of kills and Mikena Werner (SC) earned a service ace to give the Athenas a five-point lead at 22-17. Following a ball handling error on the Athenas, CMS ended the set by winning three of the final four points to take the game 25-19 and a critical 2-0 lead in the match.

In their first five NCAA Tournament matches, Wittenberg had completed four sweeps and dropped just one set. As a result, by wining the first two sets the Athenas had already taken more sets off the Tigers than all of their previous NCAA Tournament opponents combined.

CMS dropped the first point of the third set, but scored the next five points to take an early 5-1 lead. Crystal Anderson (CMC), Stein, and Moore each collected kills on the run and Clara Madsen provided a service ace. For a moment, it looked as if the Athenas would cruise to the 3-0 sweep. However, that moment was fleeting. The Tigers scored seven of the next eight points to take an 8-6 lead.

In a match that did not feature many streaks, the third set was filled with runs for both sides. CMS responded with an 8-1 run of their own to grab a 14-9 lead. During the streak, Arnston floored three kills all off passes from Phoebe Madsen (CMC).

Five points later, the Athenas had bumped their lead up to 20-14. Once again, the Tigers would not go down without a fight. Wittenberg quickly trimmed the CMS lead to just one point at 23-22, thanks to four kills from Aubrey Cox in a five-point span.

An error from Cox gave the Athenas the serve back and, following a short rally, Arntson ended the match with a cross court kill from the right-side to give the Athenas their first National Championship in program history, 3-0 (25-28, 25-19, 25-23).

“The biggest thing for me, was just saying to myself, ‘I belong here,’ and having that confidence,” said Arntson of her mindset during the match. “To really make it to this level, at some point you have to forget your level of volleyball and just have the confidence. I knew they were going to key on me and Shelbi (Stein), but I didn’t let that scare me. The biggest thing was to stay confident.”

Along with Arntson’s historic performance, the Athenas forced the Tigers to swing at just a .131 clip in the match. As a team the Athenas collected nine blocks and in the back row, Isabelle Taylor (CMC) and Mikena Werner (SC) each collected at least 15 digs to lead a strong defensive effort.

When it was all said and done, the Athenas earned, not only the first National Championship for women’s volleyball, but the first NCAA National Title for CMS in any women’s sport in the department’s history.