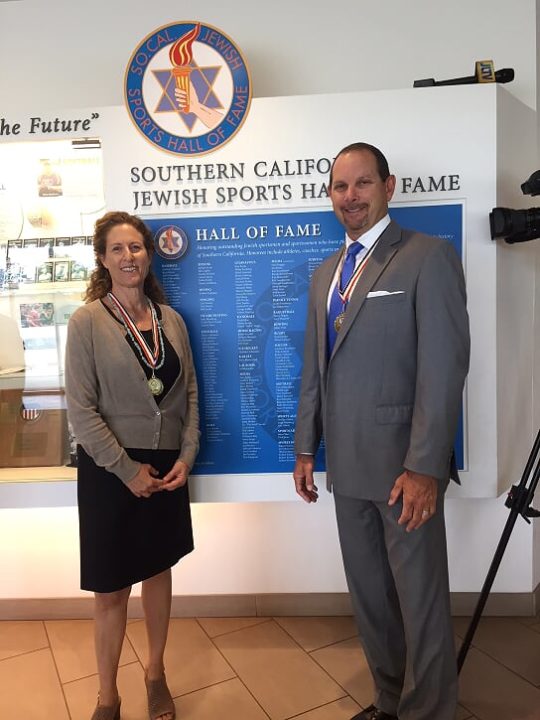 All-time great indoor and beach player and Jewish Hall of Fame selection Gene Selznick is the primary featured player as part of a new volleyball hall of fame display that was unveiled Sunday at American Jewish University. 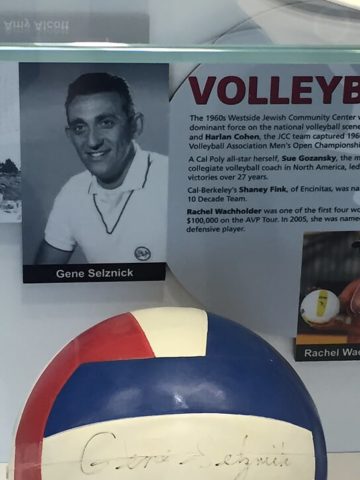 “It was a very exciting day for volleyball to see Nancy and Burt be inducted and witness the new hall of fame volleyball display featuring Gene,” said Southern California Indoor Volleyball Hall of Fame Executive Director Michael Sondheimer, who attended the event.  “Nancy and Burt gave beautiful speeches as part of their acceptance of the honor, which was part of a special day for the sport of volleyball.”

Fredgant won her first beach volleyball tournament at the age of 14.  She won 17 tournaments in the 1970s, 80s and 90s, most with Hall of Fame player Kathy Gregory.  She was the LA City Player of the Year at Palisades High School before playing college volleyball in Malibu. She is still involved in the sport today through the club circuit indoors and providing lessons on the beach.

Fuller was a successful assistant coach at UCLA before becoming the head coach at Utah State and leading them to two NCAA tournament appearances.  Later he worked as assistant coach at both Utah and San Diego State before retiring from coaching to work full-time as an international referee.  He has worked the past two NCAA Women’s Beach Championships in Gulf Shores and is still a clinician around the nation indoors.

The 2018 Southern California Jewish Sports Hall of Fame induction ceremonies will take place on Sunday afternoon, June 24 at American Jewish University in West Los Angeles.  The Jewish Sports HOF has been around since 1990 and is located at the AJU.