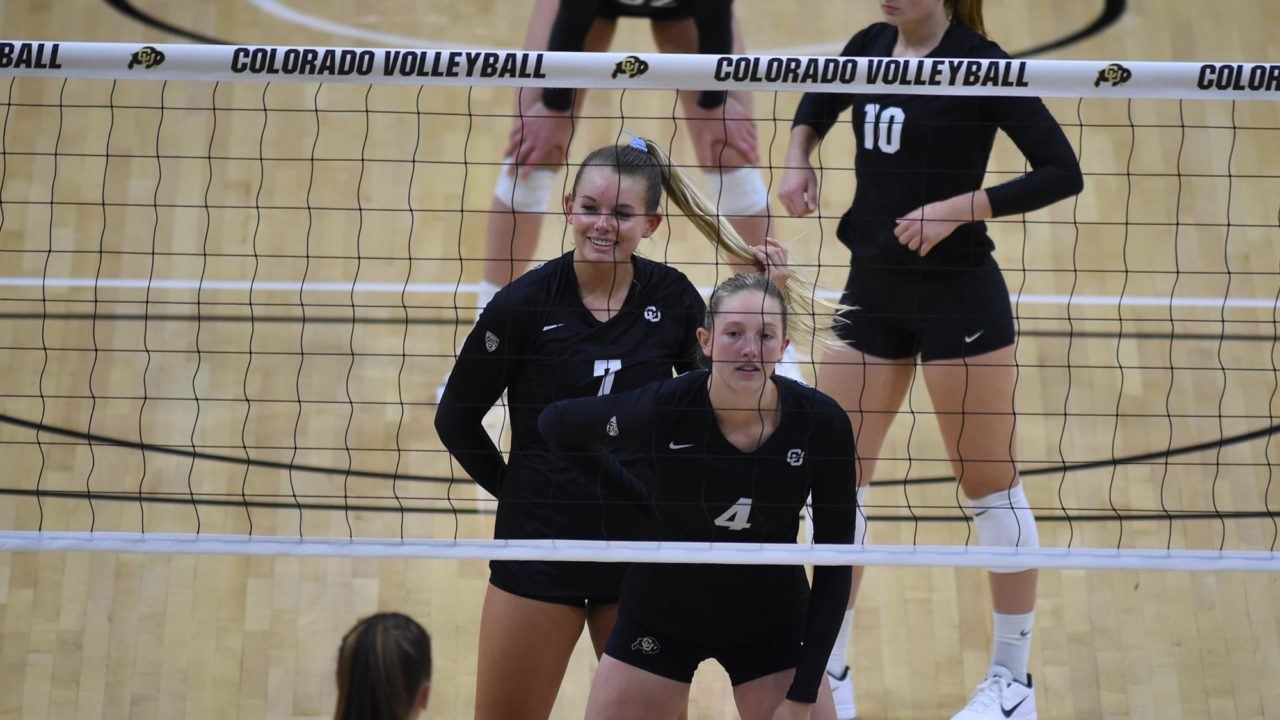 The Colorado Buffaloes, looking to erase the memory of a tough 2016 season that saw them start the year on a high and end outside of the NCAA tournament, opened their year 3-0 over the weekend, concluding with a victory over Oklahoma on Saturday in Norman. The run, which included wins against Northwestern State, Seton Hall, and the Sooners, gives Colorado their first 3-0 start since 2012, where the Buffs won their first 4 games of the season. The team’s best start came in 2008, where they won their first 6 games of the season.

“We are certainly excited to sweep the weekend,” Colorado head coach Jesse Mahoney said. “There were a lot of great performances and we finished the weekend playing better volleyball than we started it. Brynna Deluzio was fantastic running our offense as a freshman and I thought both our middles blocked exceptionally well.”

The serve for Colorado helped keep Oklahoma out of system for a lot of the game – they had 9 aces in total, which is more than they did in their first two games of the year combined.

NORMAN, Okla. — The Colorado Buffaloes recorded their third straight win to start the season as they defeated Oklahoma (1-2) 3-1 on Saturday night in the final match of the NIKE Invitational. Senior Anna Pfefferle, junior Alexa Smith and freshman Brynna Deluzio were named to the all-tournament team after helping the Buffs to a perfect record in tournament play.

WHAT HAPPENED: The Buffs returned to McCasland Field House for the first time since 2010, a place where they had lost the last five straight played there. But that changed on Saturday when the Buffs made a statement, defeating the Sooners, 25-11, 23-25, 25-16, 25-14, to break the streak.

Smith led the Buffs with 15 kills, while hitting .323. Junior Frankie Shebby also reached double-digit kills with 13. She recorded her second double-double of the season with 10 digs and also added four block assists. Senior Joslyn Hayes tied Shebby with 13 kills and posted a pair of blocks.

Several Buffs had strong performances in the victory. Pfefferle led the match with a .700 hitting efficiency, hammering seven kills on 10 errorless attacks. She too was strong at the net, posting five blocks. Deluzio dished out 46 assists and added three kills, six digs, two aces and two blocks.

SET 1: The first set belonged to the Buffs. CU started the set with six straight points, causing OU to take a quick timeout. The Buffs did not let up as they continued to increase the lead to 11 points at 15-4. CU was never in danger during the contest, cruising to an easy 25-11 set win. The Buffs hit .478 and held OU to -.077.

SET 2: The Sooners got out to a 6-3 lead in the second set, but CU rallied back, scoring five straight points for an 8-6 advantage, forcing the Sooners to call another early timeout. The Buffs continued to press after the break, taking four of the next five points for a 12-8 lead. OU did not let up and was able to get within a point late in the set (18-17), but the Buffs responded with a kill from Pfefferle and an ace by Smith. The Sooners called a timeout at that point and took the first two points out of the break before serving into the net, putting the Buffs back up by two.

OU tied the set up two points later at 21 and went ahead on the next point, causing the Buffs to use a timeout. The Sooners took the next two points and again the Buffs were forced to take a timeout (24-21). The Buffs fought off the first two set points for OU, but were not able to finish, falling 25-23 in the frame.

SET 3: The two teams battled through the first part of the set before the Buffs were able to put together a 9-2 run to take an 18-10 advantage. Colorado did not let up, increasing the lead to nine points (21-12). The Sooners attempted a rally, taking four of the next six points, but it was not enough as the Buffs finished the set 25-10 with Deluzio’s third kill of the match.

SET 4: The fourth set started like the third, with the Buffs pulled away. CU had a four point lead at the media timeout (15-11) and extended it to a six-point lead at 17-11. OU answered with a pair of points, but the Buffs responded with a pair of their own points. The Sooners spent a timeout at that point, but it did not slow the Buffs down as they recorded a 5-0 run to get to match point (24-13). OU fought off the first match point, but was unable to hold off the Buffs as Hayes finished the match with a kill (25-14).

OTHER INDIVIDUAL STATS: For the first time this season, three Buffs (Smith, Shebby and Hayes) had 10 or more kills…CU also had a pair of Buffs (Carta-Samuels and Shebby) with double-digit digs…Four Buffs recorded an ace in the match; Pfefferle led the way with three, tying a career-high.

NEXT UP: Colorado will head back to Boulder to host the Omni Invitational. CU will host Wake Forest, Rice and Abilene Christian, Sept. 2-3 at Coors Events Center.

QUOTABLE:
Jesse Mahoney, head coach
“We are certainly excited to sweep the weekend. There were a lot of great performances and we finished the weekend playing better volleyball than we started it. Brynna Deluzio was fantastic running our offense as a freshman and I thought both our middles blocked exceptionally well.”

NORMAN – The University of Oklahoma volleyball team won its first match of the day, a 3-0 sweep of Northwestern State, before a 3-1 loss to Colorado closed out the NIKE Invitational. The Sooners finished the weekend 1-2 in their home tournament; playing the finale in front of 1,007 at McCasland Field House.

Oklahoma’s straight-sets victory to start the afternoon over the Lady Demons came by scores of 25-16, 25-20 and 25-21. Junior outside hitter Alyssa Enneking (League City, Texas), who earned All-Tournament honors, led the offense with 10 kills on a .429 hitting percentage, while adding nine digs and three blocks.

NSU was led in kills by outside hitter Reagan Rogers, who hit .344 with 14 kills. Outside hitter Alexis Warren chipped in with 11 kills and a team-high 12 digs.