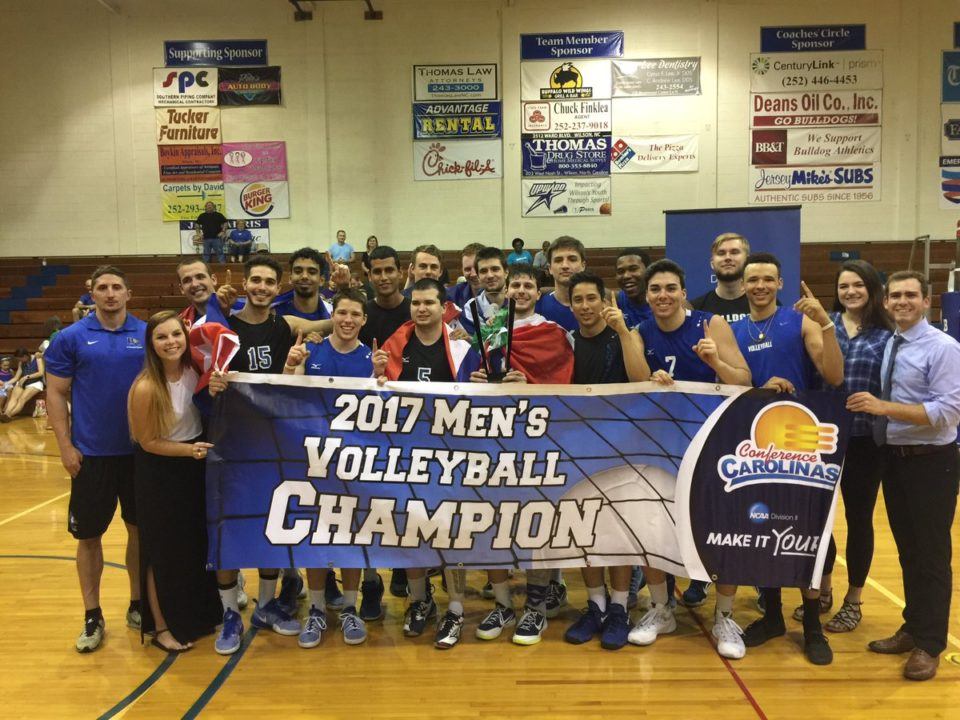 The Conference Carolinas doesn’t have quite the luster in the rankings of the other conferences, as Barton leads the way in the VolleyMob Men’s Top 20 Power Rankings at #19. Make no mistake though as the conference boasts several strong teams with a few potential surprises.

It seems as if there are three tiers in the league, with the top featuring teams with high 2017 win totals and plenty of returning talent. The second tier sees some potential breakout teams who progress from young to older while a few in the bottom tier look to be rebuilding. Regardless, the 2018 season should have a mix of strength at the top and some parody, making for an exciting league.

Barton made the NCAA Tournament as the winner of Conference Carolinas last season, and look ready to defend their title after going 16-2 in league play last year. They return nine letter-winners and a majority of their starters (5) who took home several awards with three of those five earning First-Team all-league honors. In fact, two are brothers in the Mandilaris family.

While they posted a strong league and overall record (23-6), it’s not as simple as they dominated the league. They tied for the regular season title with another team just two matches back before winning the Conference Carolinas Tournament. That means the margin for error won’t be much once again, but Barton does have plenty of depth and firepower to once again be the favorite to earn an NCAA Tournament bid – where they would hope for more success in 2018.

Both matches with Barton went to five sets last year, with the two sides splitting the pair. That shows how easily things could have changed with a few points here or there, so don’t count out King from what would be an incredible turnaround after winning eight matches in 2016 to 28 last year and potentially a conference title run in 2018.

Mount Olive should make the conference title race a three-team venture, as they did a bit last year when they finished 14-4 in conference play. They were also a team who upended King in the Conference Carolinas Tournament semifinals last year as they were a match away from the NCAA Tournament.

This year they return 11 letter-winners with a handful who have earned some sort of conference recognition, led by Conference Carolinas Defensive Player of the Year Josh Donahue. It’ll be an interesting mix of those 11 returners and 10 freshmen, but if they can get some contributions from the new faces to go with their experience they could surprise Barton and King at the top.

Beyond Mount Olive, North Greenville and Emmanuel could surprise some as their relatively new programs garner experience for the first time, but it seems as if the top three are segmented in a tier of their own for the time being.