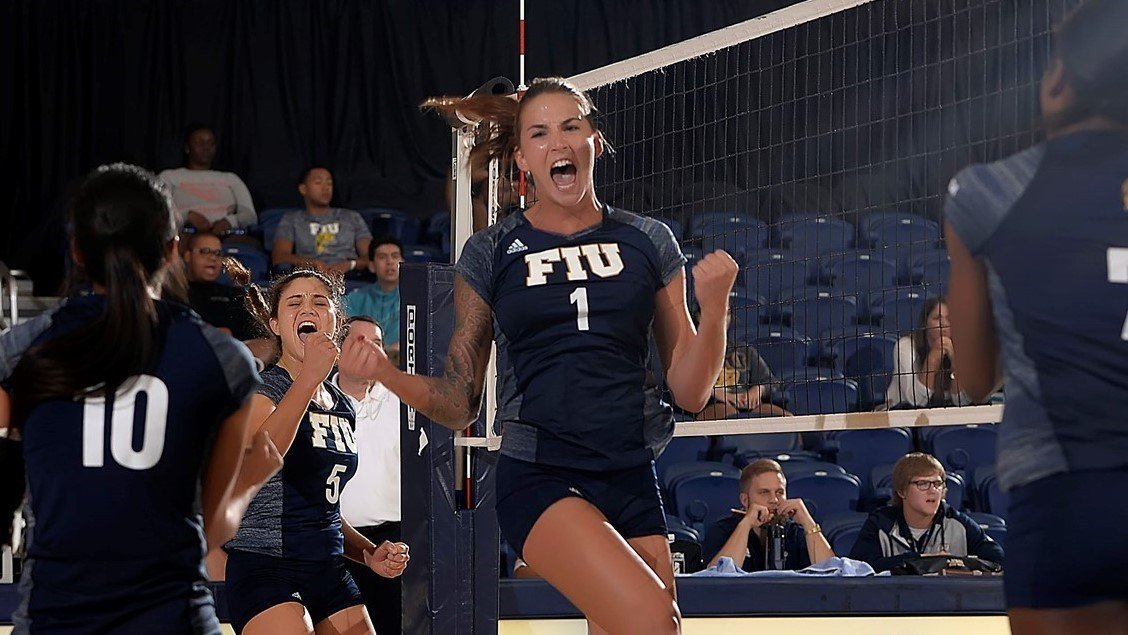 As the league’s regular season champion, WKU also claimed a share of the most postseason awards for the third straight year. Juniors Alyssa Cavanaugh and Jessica Lucas earned first-team accolades for the third straight season, while teammate Sydney Engle made her second straight appearance in the lineup. Rachel Anderson and Georgia O’Connell rounded out the Lady Topper selections as first-time honorees. Anderson, Cavanaugh and Lucas led the potent WKU offense to a 14-0 league record, marking only the fourth time a C-USA team has finished the conference season unblemished. Cavanaugh posted the highest hitting percentage (.338) in the nation among all outside hitters with more than 900 attempts this season, while Lucas set a C-USA single-season record with seven Setter of the Week awards and ranks eighth nationally averaging 11.49 assists per set. Sydney Engle led all C-USA with .45 service aces per set this season while teammate Rachel Anderson posted a .403 hitting percentage, good for second in C-USA and 16th nationally. O’Connell played in all 102 sets for the Lady Toppers and ranked seventh among C-USA leaders in digs per set (3.99).

This year’s championship host, Rice, also boasts five student-athlete selections, leading them to the most home wins of any C-USA team this season. After posting a league-best 19 double-doubles this season, junior setter Madison McDaniel earned her second straight first-team selection, while senior Chelsey Harris cracked the first team list for the first time in her career. Leah Mikesky and Portia Okafor both garnered repeat all-conference accolades, while rookie Lee Ann Cunningham led all C-USA freshmen with 464 digs and was named to the all-freshman squad.

Southern Miss joined WKU and Rice with five-student athletes of its own on the postseason awards list. First-teamers Sarah Bell and Stephany Purdue played integral roles in leading the Golden Eagles to a 22-7 overall record and the second seed in the C-USA Championship. Bell wrapped up the season ranked 10th nationally in total assists with 1,166 while Purdue became Southern Miss’ all-time kills leader and ranked third among C-USA leaders, averaging 3.82 kills per set this season. Kylie Grandy and Chanel Joyce were both named to the all-conference second team. Grandy provided consistency behind the service line all season, ranking second in C-USA with .43 service aces per set. Joyce posted the highest hitting percentage by a Golden Eagle in over two years, as the senior recorded 14 kills on 20 attempts (.700) in an Oct. 9th contest against UTEP. Impressive freshman Catherine Repsher rounds out the award recipients for Southern Miss, as the rookie finished the regular season with 100 total blocks (second in C-USA) and was named to both the all-conference and all-freshman teams.

The third seed in the C-USA Championship, Marshall, added five individuals to the all-conference lists. Senior leaders Allie Kellerman and Ally Kiekover garnered first-team selections after pacing the Herd to its first 20-win season since 2009. Kellerman set a single-season program record after being named the C-USA Defensive Player of the Week four times this season, while Kiekover controlled the Marshall offensive attack with a season hitting percentage of .351. Youngsters Madison Hill, Jac’cara Walker and Madelyn Cole exhibit the bright future for the Herd, as all three rookies earn all-freshman team honors. Hill, also an all-conference second teamer, wrapped up a historic season with a .432 hitting percentage (fourth among national leaders, first in C-USA). Walker and Cole both earned C-USA Freshman of the Week honors this season.

North Texas landed two members on the first team, with juniors Amanda Chamberlain and Holly Milam. Chamberlain posted the highest single-match hitting percentage in C-USA this season when she converted 14 kills on 16 attempts against Middle Tennessee (.875). Milam finished with 189 kills in conference matches, good for fourth among C-USA leaders and earned a C-USA Offensive Player of the Week award after registering a 40-kill weekend. Emma Eakin wrapped up the Mean Green selections, earning all-freshman team honors after tallying 111 kills in league play.

Florida Atlantic wrapped up a successful 2016 campaign with a 10-4 conference record and will play as the five seed in the C-USA Championship. Maja Ristic made back-to-back appearances on the first team, while teammates Abbi Reid and Sigourney Kame both earned postseason league recognition for the first time. Ristic finished the season fourth in C-USA with 382 total kills, Reid registered a team-best .340 hitting percentage and Kame added a 13-match stretch with double-digit kills this season.

UTEP is back in the C-USA Championship for the first time since 2013, courtesy of a pair of second-team all-conference members and an all-freshman squad member. Sarah Villa and Lindsey Larson both crack the postseason team for the first time in their careers. Villa led C-USA as the only player to accumulate 500 digs this season (514), while Larson was the only C-USA student-athlete to record a triple-double in 2016 (five). Macy Austin was named to the all-freshman team and led the Miners with 259 kills this season.

Katie Hogan represents FIU on the all-conference second team. The junior did it all for the Panthers this season, leading them in kills (329), points (384.0), attacks (882) and double-doubles (10). Hogan also posted the sixth highest hitting percentage among C-USA leaders this season with a 3.63 mark.

The 2016 Conference USA Volleyball individual superlative awards will be announced tomorrow, November 17, with the all-academic team to be announced the following day, here on conferenceusa.com.