CSUN Sweeps Hawaii for the Second Night in a Row 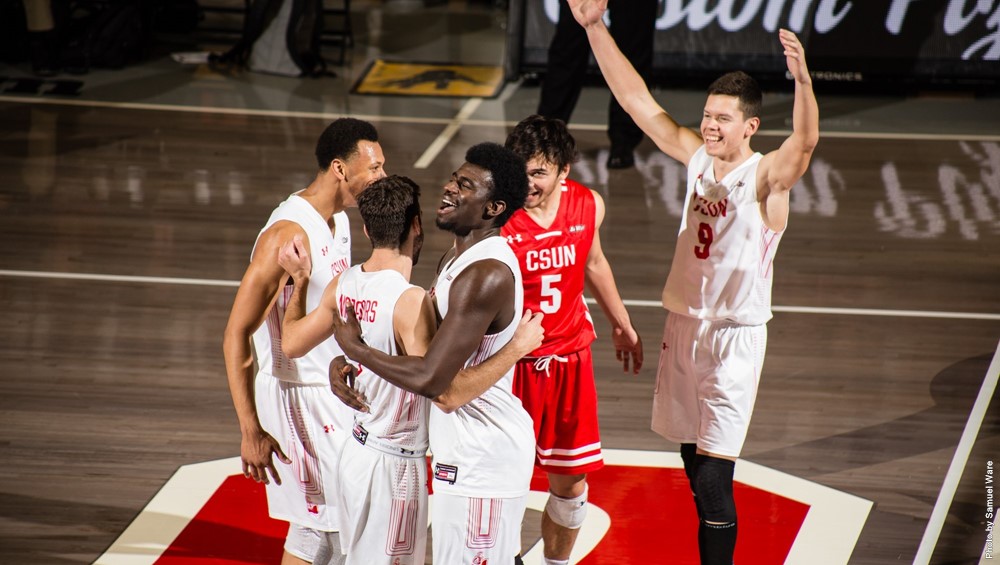 The Matadors prove their win was not just a fluke by repeating the outcome from the night before. Current Photo via CSUN Athletics

NORTHRIDGE, Calif. – The CSUN Matadors hosted the Hawaii Rainbow Warriors on Friday night, and the Matadors pulled off the upset and sweep for the second night in a row. This is the first time the Matadors have taken a pair from Hawaii at home since 2012.

Leading the CSUN offense was fifth-year senior opposite, Arvis Greene, with 14 kills on a .333 clip. Dimitar Kalchev also had an impressive offensive performance with eight kills and a .235 hitting percentage. Josiah Byers and Maciej Ptaszynski each tabbed six kills and zero errors for .750 and .500 hitting percentages, respectively. Setter Sam Porter ran the offense with 30 assists and added five digs.

Hawaii was led by Stijn van Tilburg (.214) and Austin Matautia (.188) with 12 and seven kills, respectively. Setter, Joe Worsley, led the defensive campaign with seven digs, while delivering 29 assists and going three for five on attacks.

The Matadors will return to play on March 30 where they will host the UCSB Gauchos. The Rainbow Warriors will play again on Sunday at Pepperdine at 5 pm.

NORTHRIDGE, Calif. – The 10th-ranked CSUN Matadors pulled off an upset for the second consecutive night, taking down No. 3 Hawai’i 25-17, 25-22, 25-17 in a Big West Conference match Friday night at The Matadome.

With the second of back-to-back 3-0 victories, the Matadors improve to 12-7 overall and even their Big West slate at 2-2 Big West. CSUN last swept consecutive matches over the Warriors in The Matadome in 1991 and last claimed a season home series from Hawai’i in 2012.

“Dimitar served so well for us tonight,” said CSUN head coach Jeff Campbell. “The stats don’t tell the entire story, he created overpasses, took them out of system and caused them problems. Hawai’i is a really good team and for us to beat them the way we did, it shows that we’ve turned the corner.”

After leading CSUN to a .352 hitting clip in Thursday’s opener, junior setter Sam Porter had 30 assists as the Matadors hit .368 (38-10-76). Josiah Byers and Maciej Ptaszynski each had six kills without an error as Byers hit .750 and Ptaszynski hit .500.

Eric Chance added four kills and four blocks as CSUN out-blocked Hawai’i by the margin of 9.5 to 6.0. The Matadors also had a slight edge in team digs (22-21) as libero Emmett Enriques had a team-high seven.

CSUN dominated the opening set, committing just three errors while hitting .478. After Kalchev’s hitting error gave the visitors an early 7-4 lead, the Matadors answered with a 5-0 run to take the lead for good at 9-7. Kalchev’s first of six aces gave CSUN a 14-8 lead and the Matador lead didn’t drop below four points the rest of the set.

In set two, Hawai’i stuffed a Greene attack trimming a four-point CSUN lead down to one at 12-11. But a Kalchev kill on the next point fueled a 7-3 Matador run that forced a Warrior timeout at 19-14. After a Chance kill set CSUN up with set point at 24-20, Hawai’i saved a pair of set points before Kalchev connected on set point.

Kalchev then opened the final set with four aces as the Matadors bolted out to a 7-0 lead. CSUN led 10-1 following a Byers-Ptaszynski block and the Warriors could only get within five points to rest of the set.

CSUN is off from match action until Mar. 30 when the Matadors conclude a five-match homestand against UC Santa Barbara.

NORTHRIDGE, Calif. – For the first time since 2012, the University of Hawai’i men’s volleyball team dropped a two-match series to CSUN, falling in straight sets for the second straight night Friday at The Matadome. Set scores were 25-17, 25-22, 25-17.

The third-ranked Rainbow Warriors (13-5, 1-3 BWC) suffered their third straight defeat and fourth in their last eight matches after starting the season 9-1.

One night after allowing only two services aces to the nation’s No. 3 serving team, UH surrendered eight aces, including six by Dimitar Kalchev, five of which occurred in the third set. Arvis Greene led the Matadors (12-7, 2-2) for the second straight night with 14 kills and five blocks.

UH led 7-4 early in Set 1 before giving it right back as the Matadors used a 7-1 run, capped by Kalchev’s first ace, to build an insurmountable 14-8 lead. The Warriors rallied to within 21-16 after an ace by Brett Rosenmeier but back-to-back kills by Greene gave the Matadors set point. A Dalton Solbrig hitting error gave CSUN the set.

The Warriors trailed from the start in Set 2 and closed to within 22-19 after a Gasman/Rosenmeier double-block on Greene. UH erased two set points with a kill by van Tilburg and solo block by Solbrig but the Matadors took the set with a kill by Kalchev.

CSUN scored the first seven points of Set 3 – four by way of Kalchev aces. The Warriors got as close as five at 13-8 after consecutive blocks and later 22-17 after an ace by Gasman. But another Kalchev ace gave the Matadors match point and Larry Tuileta‘s hitting error ended the match.

The Warriors continue their road trip with a non-conference match at Pepperdine, Sunday at 5:00 p.m. PT (2:00 p.m. HT) at Firestone Fieldhouse.