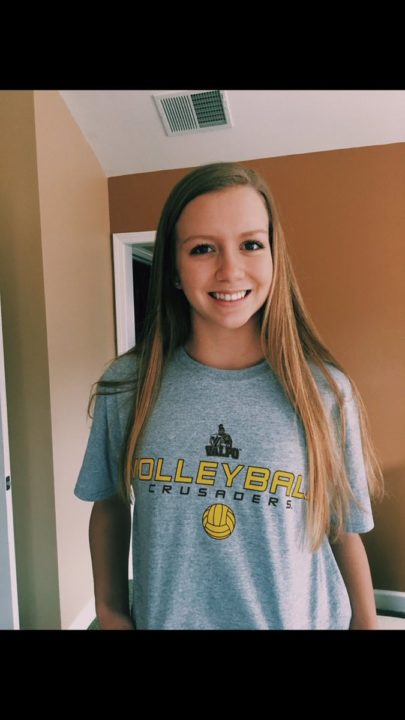 La Porte, Indiana middle hitter and outside hitter Kara Cooper has verbally committed to Valparaiso in the Missouri Valley Conference. The... Current

La Porte, Indiana middle hitter and outside hitter Kara Cooper has verbally committed to Valparaiso in the Missouri Valley Conference.

The 6’2″ junior (Class of 2019) averaged 1.8 kills/set and 1.2 blocks/set as a junior, the same averages as she had in her sophomore season, but the fact that those key stats were the same doesn’t mean she didn’t progress. During the 2017-2018 season, Cooper went from a primarily front-row player to a frequent 6-rotation player. She had 49 digs as a junior (she had 28 as a freshman and sophomore combined) and after not serving once as a sophomore, she served 301 times as a junior and recorded 34 aces, 36 service errors, and had an 88.4% service percentage.

That defensive improvement will be crucial at Valparaiso: a program that led the NCAA in digs last season.

Cooper plays on Dunes’ 17 Black roster, and will stay close to home for college: Valparaiso is only 30 minutes southwest of La Porte, and several of her club teammates live in Valparaiso. The Dunes Volleyball Club last sent a player to Valparaiso in the class of 2014 Catherine Ament, who after playing for 2 seasons was medically unable to continue competing and stayed on as a student assistant with the team. In 2016, they also sent Grace Hales to Valparaiso to play basketball. Sara Silcox, a Dunes Volleyball Class of 2001 player, still ranks 4th in Valparaiso’s all-time rankings in career digs.

super excited to be a Crusader!!!?? #committed pic.twitter.com/EI6xArydUT

Valparaiso finished last season 17-16 and 8-10 in the Missouri Valley Conference before eventually falling to Illinois State in the opening round of the MVC tournament. Valparaiso runs a lot of offense through their middle hitters: senior Taylor Graboski led the team in scoring last year with 336 kills and was also 2nd on the team with 109 kills: 1 behind team leader Sydney Bronner.

Valparaiso is loading up on middles in their next two classes, meaning that Cooper might wind up on the outside, at least to start her career.