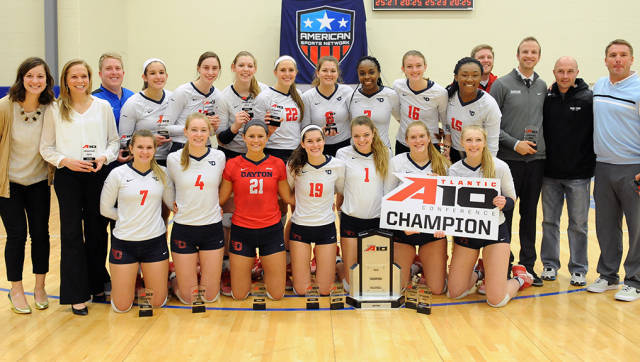 With the win Dayton posted their 19th straight match won and their 11th A10 title in a rematch of last years title match. Dayton receives the automatic big to the NCAA Volleyball Tournament. The NCAA Selection show will be on Sunday, November 27 at 9 pm ET on ESPNU.

The first set was a back and forth battle while included 11 ties and five lead changes in the favor of Saint Louis. In the second set, the score was tied at 18 all where Dayton scored seven of the last nine points of the set to tie the match at 1-1.

Saint Louis fought through the third to take the 2-1 lead, but Dayton fought in the fourth to tie the match and send it into a fifth and deciding set, where Dayton rolled away with the match 15-9.

Dayton had four players in double-digit kills with Jessica Sloan leading the way with 23 and a .412 hitting percentage. Lauren Bruns posted 16, Amber Erhahon added 14 and a .542 hitting percentage and Kendyll Brown recorded 11 kills. Setter Jane Emmenecker dished out 50 assists, while Margo Wolf picked up 24 digs in the back row.