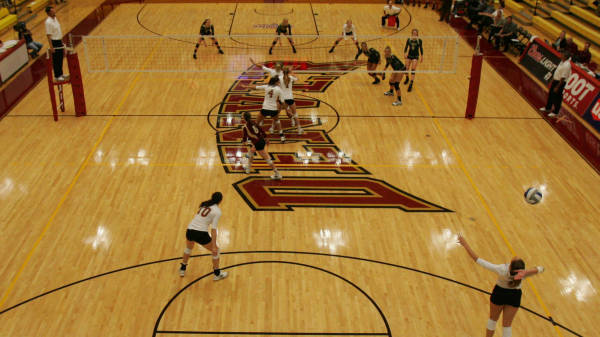 Denver hit .253 on the night, with a .429 hitting percentage in the third set. They held Western Illinois to a .164 clip. The Pioneers out-blocked the Leathernecks 11-9.

Pioneer setters Ellie Anderson and Piyusha Boteju totaled 53 assists and 21 digs, and both earned double-doubles. On the other side of the net, Jaime Johnson and Cassie Hunt notched 37 combined assists, with Hunt recording a double-double.

The Western Illinois offense was led by Shalyn Greenhaw, who had 13 kills on a .128 hitting percentage, to go with 10 digs for a double-double. Emily Dechant posted 9 kills, hitting .500.

Denver will host the Summit League Championships next Thursday through Saturday.

DENVER–  After securing the No. 1 seed in next week’s Summit League Tournament with its win over South Dakota Friday evening, the University of Denver women’s volleyball team claimed its fourth consecutive regular season title on Sunday afternoon with the 24-26, 27-25, 25-15, 25-20 win over Western Illinois.

Three Pioneers had double-digit kills, with Becca Latham leading the charge with 16. Cassie Baird had 12 and Kayla Principato had 10 in the victory. Ellie Anderson (27 assists, 10 digs) and Piyusha Boteju (26 assists, 11 digs) each had a double-double, the second of the weekend for the pair. Cassidy Rooke had 20 digs, Macy Carrabine had two service aces, and Tina Boe had six assisted blocks to lead the Crimson and Gold.

With the win, the ninth straight for the Pioneers, Denver moves to 21-5 on the season and ends regular season league play with a record of 12-2.

“I’m really proud of how our team preserved in today’s match,” said head coach Tom Hogan. ” We had an intense and emotional five set match on Friday night, a 13-hour travel day on Saturday, and then this mid-day match on the road to end our conference season.

“This season’s title feels very rewarding, especially because of the level of our league,” Hogan continued. “We were challenged each week, and we grew from these experiences.

“The depth on our team was a major factor to our success. We challenged each other at practices, and if someone had an off night, there was always someone to step in and contribute.”

Set One:  Emma Willis scored the first two points of the match for Denver with a kill followed by a block, but WIU got out to an early 11-3 lead.   DU went on a 6-0 run to cut into the Leathernecks’ lead at 11-9, and proceeded to go on another run, this time 5-1, to take a 14-12 lead. WIU would later tie the set at 15, at which point, DU went on another run to go ahead 18-15. The Pioneers stretched the lead to 21-18 before the Leathernecks went on a 4-1 run to tie the set back up at 22. There would be ties at 23 and 24 before WIU recorded back-to-back kills to win the set, 26-24. DU opened the match hitting .071 behind 15 kills, with Teal Schnurr, Principato and Boe each having three kills.  Boteju had eight assists and four digs and Rooke had four digs as well in the frame.  Carrabine had back-to-back service aces, Willis and Latham combined for two assisted blocks and Schnurr had a solo block.  There were six ties and two lead changes in the set.

Set Two:  DU scored the first three points of the set due to kills from Anderson and Latham and a WIU attack error.   The lead was short-lived as WIU evened the set at three. Denver pulled ahead 7-4, but once again, Western Illinois rallied to tie the set.  There would be ties at eight, nine, 10 and 11, before Denver went back ahead 14-11 thanks in part to two kills by Baird. The Pioneers led 16-13 when the Leathernecks tallied off four straight points to take the 17-16 lead, and from there it was back-and-forth with ties at 17 and 18.  DU couldn’t create much separation down the stretch, and each time they pulled ahead by two, WIU had an answer. There were three more ties at 22, 24 and 25, with Latham registering back-to-back kills to tie the set and give DU set point at 26-25. A WIU attack error gave Denver the needed point to take set two by the score of 27-25. There were a total of 12 ties and six lead changes in the set. Denver hit .317 in the set with a match-high 18 kills. Latham had a massive set with eight kills, and Anderson added eight assists and seven digs to lead the visitors. Boe had two more blocks, combining with Lydia Bartalo and Principato, in the frame.

Set Three:  Unlike the first two sets, Denver scored the first two points of the set off of kills by Baird and Boe, and there would be no change of leads. Becca Mau had three straight kills to push the lead to 7-2, in the midst of an overall 6-0 run that pulled the Pioneers ahead 8-2. The lead stretched to nine at 14-5 and again at 15-6, and the Leathernecks would get it down to as close as five at 17-12, 18-13 and 20-15.  However, DU remained in control, and closed out the set on a 5-0 to take the set 25-15. Denver hit a match-high .429 in the set with 17 kills.  Baird, Boe and Becca Mau each had three kills in the frame. Boteju and Anderson each had eight assists (the team had 17 assists total in the set), and Rooke added seven digs and a service ace.  Boe and Baird combined on a block, while Principato and Willis teamed up on two blocks.

Set Four:  DU built an early 7-3 lead that grew to 13-7 when WIU went on a 6-0 run to tie the set at 13. DU would pull ahead again, this time by four at 18-14, but once again, WIU responded to cut into the lead, making it 18-17, eventually tying the set at 19.  From there, DU closed the match on a 6-1 run to win the set 25-20 and the match. Baird closed the match with five kills, including three in Denver’s final five points of the set. She also recorded the final point of the match on a block with Boe. Anderson had seven assists and added a service ace, while Carrabine had four digs to lead the Pioneers.  Boteju had a service ace as well in the final set.  At the net, Boe had two assisted blocks, combining with Baird and Mau, and Latham and Willis combined for a stop. There were five ties and one lead change, which occurred when Denver took the 2-1 lead. Denver closed the match hitting .222 in the fourth set with 14 kills.

UP NEXT:  The Pioneers host the Summit League Tournament this Thursday-Saturday at Hamilton Gymnasium. Denver has a first-round bye and will play the winner of the North Dakota State/ Omaha match on Saturday at 3 p.m.

TICKETS: Tickets for the Summit League Tournament are on sale now and can be PURCHASED HERE.

PIONEER MOVEMENT: Fans interested in making a donation to the volleyball program can do so by CLICKING HERE. Your contribution will make a direct impact on the success of YOUR Pioneers. Thank you in advance for your unwavering support of our student-athletes and their quest for excellence.

MACOMB, Ill. – The Western Illinois volleyball team gave Denver all they could handle on Sunday afternoon, but the Leathernecks fell 3-1 at Western Hall.

“We are proud of the way this team fought today. We talked before the match about being aggressive offensively and having a big defensive match. I think our team did an excellent job extending rallies and working hard to keep the ball off of the floor,” said head coach Kelly Richardson. “We really had an opportunity today to see how this program is growing and the exciting things that are ahead for Western Volleyball.”

The Leathernecks jumped out to a quick 10-2 lead, in part due to back-to-back kills from Shalyn Greenhaw. Denver rallied to take the lead after a 10-1 Pioneer run. Down 20-17, Western scored three straight points that included a service error, an attacking error committed by Denver and an Emilee Dechant kill. With the scored tied at 24, Dechant and Aleezah Washington scored back-to-back points assisted by Jaime Johnson and Cassie Hunt, respectively. The Leathernecks took the set 26-24.

Each team went on a 3-0 run to begin the second set, tying the match at three points apiece. Down 16-13, the Purple and Gold scored five out of six points because of Johnson and Dechant kills, along with a Mackenzie Steckler service ace. Johnson put the Leathernecks up 24-22 with an ace, but Denver won five of the last six points to win the set, 27-25.

The Leatherecks were topped in the third set 25-15. Denver started off the set on a 8-2 run that eventually turned into a 14-5 lead for the Pioneers. Western scored four out of five points to pull with six, but the Pioneers proved to be too much in the third.

The fourth set also went the Pioneers way, as Denver won the set 25-20 to win the match. Both teams went back-and-forth after Denver pulled out to a 7-3 lead. The frisky Leathernecks would not go away as Dechant and Steckler each recorded kills to make it 9-6. WIU went on an impressive 6-0 run in the middle of the set to tie up the score at 13. Steckler recorded two more aces to help knot up the game. With the scored tied at 19, Denver scored six of seven points to win the set and the match.

Greenhaw, Dechant and Lexi Kolschefski were honored before the match and Richardson expressed thankfulness for the seniors’ contribution to the program.

“These three seniors have brought so much to this program. They’ve been here through this process of changing the culture and have been strong advocates for the change,” Richardson said. “More importantly, they are good people and will continue to leave impacts on everyone they come in contact with. They have given everything they have had and we are exceptionally thankful for them.”

This match wraps up the Leathernecks season and WIU will look forward to  the 2018 season.