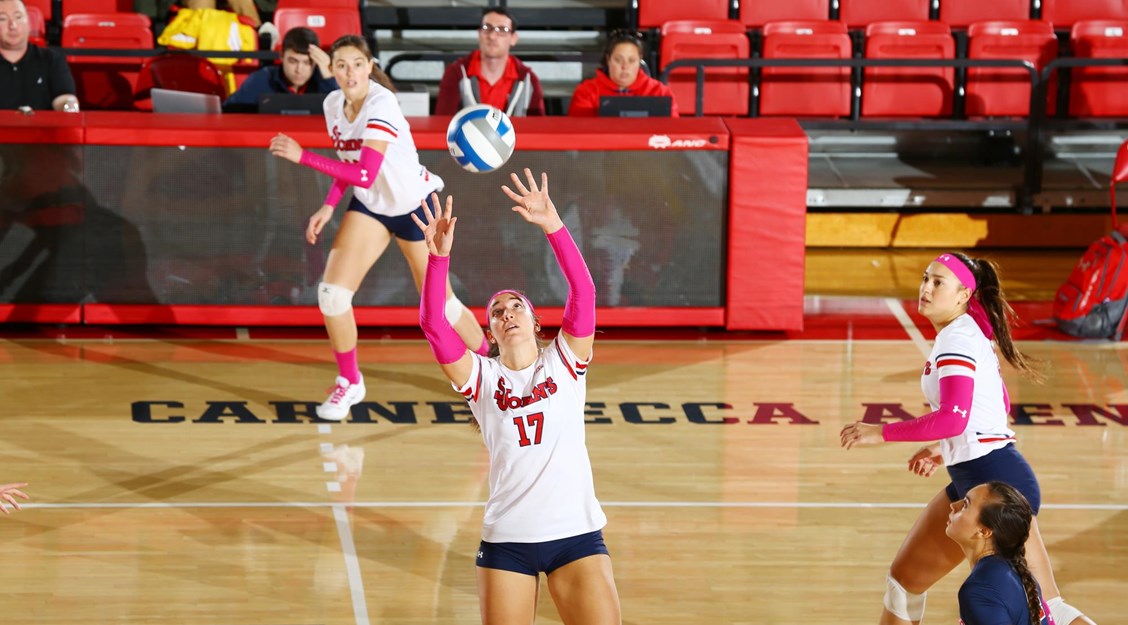 NEW YORK – St. John’s Erica Di Maulo and Xavier’s Meredith Klare collect the BIG EAST Offensive and Defensive Player of the Week awards, respectively. Creighton’s Kari Zumach is the recipient of the Freshman of the Week honor. This is the first Player of the Week accolade this season for all three players.

No. 10 Creighton remains unbeaten in the BIG EAST, securing its 10th straight victory on Saturday over Butler to lead the league. The Bluejays were tested on Thursday as Xavier battled to five sets. No. 18 Marquette sits just behind in second, winning both matches over the weekend. The Golden Eagles defeated DePaul at home before taking down Northern Iowa, Missouri Valley Conference leader, on the road.

Di Maulo helped St. John’s secure two victories over the weekend with an average of 10.88 assists per set, which was third-best over the weekend. The Red Storm swept Villanova before winning a five-setter against Georgetown. Di Maulo recorded a double-double with 42 assists and 15 digs against the Wildcats as her 42 kills are the second-most in the league for a three-set match this season. In the meeting versus the Hoyas, she tallied another 45 assists, along with eight digs, four blocks and three kills.

Congratulations to Erica Di Maulo for being named BIG EAST Offensive Player of the Week!

Klare recorded a match-high 29 digs in a five-set loss at No. 10 Creighton. She had 22 more digs in a win at Providence for a total of 51, helping the Musketeers go 1-1 on the weekend. Klare was second-best in the BIG EAST over the past week with an average of 5.67 digs per set. She added seven assists and helped hold Xavier’s opponents to .188 hitting.

Zumach led the league in hitting over the weekend at .448 as a freshman, while leading the Bluejays with seven total blocks. She hit .471 in a five-set win against Xavier and added a season-high nine kills, three digs and four blocks. In a sweep of Butler, she hit .417 with six kills, three blocks and a dig. She also helped hold the Bluejays’ opponents to a league-best .096 hitting.

🏆🏅🎊
Congratulations to Kari Zumach on earning this week's BIG EAST Freshman of the Week award!