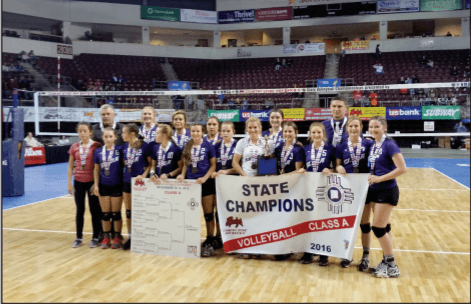 The New Mexico high school state volleyball tournament concluded on November 12, with six new champions. All schools have made... Current Photo via NMACT

All schools have made it to the championship match and won at some point in their schools history, with Mora winning their first since 1986 and Elida winning seven consecutive titles. The tournament took place at Santa Ana Star Center in Rio Rancho, New Mexico.

For Centennial Jadyn Nanez put down 21 kills and 12 digs for a double-double, on top of that she posted four aces and blocks. Maya Handly hammered down 21 kills, while Rylee Meloy put down five blocks. Setter Raquel Gonzalez dished out 44 assists and 12 digs for a double-double. In the back court, three other players picked up double-digit digs – Marin Smith (41), Sarah Polanco (11) and Alex Nevarez (11).

Sandia Prep won their second consecutive state championship with a win over Robertson in straight sets, 25-18, 25-14, 25-17.

Sandia Prep stayed on top the majority of the match, never sweating it in the finals of the championship match.

Texico won their 13th overall state title in the programs history and the 10th since 2001.

For Mesilla Valley Christian, Kara Foreman put down 22 kills and 30 digs, while Hannah Nunley added 17 kills, 20 digs and six blocks. Lauryn Hidges put down eight blocks, while each setter posted double-doubles – Annalies Mobley dished out 30 assists and 12 digs, while Arianna Torrisi handed out 14 assists and 17 digs. In the back court, Amy Gardner picked up 30 digs.

For Melrose, Hannah Woffard put down 14 kills and 12 digs, while Reagan Carthel added 13 kills and 18 digs for double-doubles. Setter Landry Widner dished out 23 assists and 15 digs, also posting a double-double. in the back court, two other players picked up double-digit digs – Jayden Beard picked up 21, while Kiki Roybal added 12.