Fairfield Now 5-0 In MAC Play With Sweep At Canisius 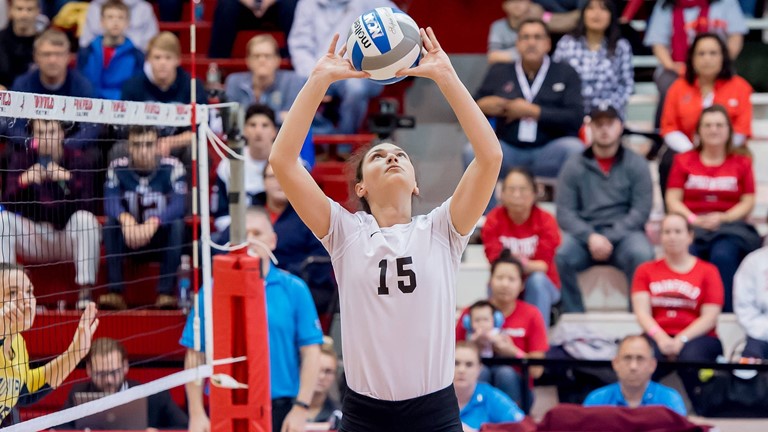 Manuela Nicolini recorded a double-double with 40 assists and 12 digs and managed the Fairfield University Volleyball offense to a season-best .291 hitting percentage as the Stags swept host Canisius this afternoon in Buffalo. Current Photo via Fairfield Athletics

Manuela Nicolini recorded a double-double with 40 assists and 12 digs and managed the Fairfield University Volleyball offense to a season-best .291 hitting percentage as the Stags swept host Canisius this afternoon in Buffalo. The Stags improve to 5-0 in the Metro Atlantic Athletic Conference and boost their overall winning streak to six matches after the victory by set scores of 25-18, 25-20 and 27-25.

Fairfield (10-6) got four or more kills from seven different players en route to the win, led by 12 off the swing of Mayda Garcia. Kaitlyn Fisher added nine kills, with Skyler Day and Kaylie Butts each adding eight. Nicolini was 4-for-4 from the setter position, and Nora Quinn and Sonja Radulovic each went 4-of-5 (.800) to round out the attack.

“It was nice to see improvements in the areas where we focused our practice efforts this week,” said Head Coach Todd Kress. “Our middles were a much larger part of our offense, and we have started to incorporate our back row again as well.”

The Stags’ .291 hitting percentage was the team’s best since last season’s visit to Koessler Athletic Center, a Nov. 5, 2016 trip that also saw Fairfield come away with a 3-0 win over the host Golden Griffins. Today’s effort was fueled by a .387 clip in the opening stanza.

Nicolini – the reigning MAAC Player of the Week – reached 40 assists for the seventh time this season. This afternoon marked the first time she did so in a three-set match in her collegiate career.

Defensively, libero Taylor Rudeen matched Nicolini was a team-leading 12 digs. Radulovic chipped in with eight from the back row. Senior co-captain Megan Theiller made her 2017 season debut and added four digs in limited action.

“The entire team was thrilled to have Theiller back on the court,” noted Kress. “She made her presence felt with some key digs at critical points.”

At the net, Quinn registered a solo block, and Butts and Day teamed up for another Stags’ rejection.

To cap the Fairfield scoring, Radulovic landed a pair of service aces to boost her team-best total to 19 winners this season.

Canisius (4-11, 2-3) was led by a match-high 13 kills from Claire Leonard, who was also a part of five blocks. Cassidy Ceriani doled out 30 assists while running the Griffs’ attack to a .120 hitting percentage. Sofia Lopez Acosta headed the effort in the back row with 10 digs.

Fairfield completes its weekend in Western New York tomorrow afternoon at Niagara. The Stags and Purple Eagles (9-5, 5-0 MAAC) are the last two remaining unbeaten teams in the MAAC play following Niagara’s 3-0 sweep of Quinnipiac today to run its winning streak to eight matches. First serve from the Gallagher Center is set for 1 p.m.