Holly Toliver Leads Spartans In Sweep Over Maryland With 12 Kills 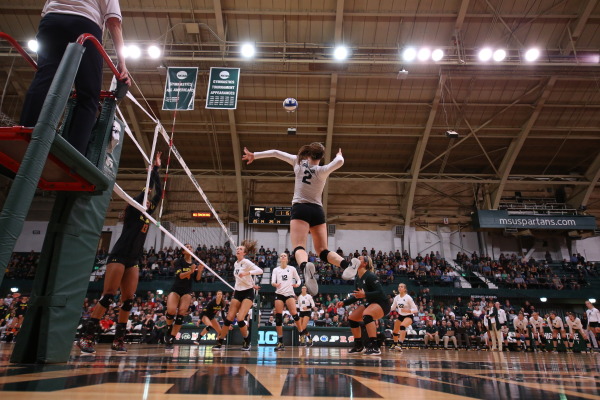 Michigan State has continued their hot streak in the Big Ten with a sweep over Maryland at home. The win moves the Spartans to 3-0 in Big Ten play.  Current Photo via Michigan State Athletics

Michigan State has continued their hot streak in the Big Ten with a sweep over Maryland at home. The win moves the Spartans to 3-0 in Big Ten play.

The first set saw the Spartans advance to a 9-3 lead early and continued to hold on to the lead throughout the remainder of the set. Michigan State built its lead slowly and hit a consistent .320 in the set, finishing the first 25-14 to take the 1-0 match advantage. The second set saw the Terps taking an 8-6 lead before the Spartans unleashed on Maryland with a 12-2 run that took Michigan State to an 18-10 lead. A 7-4 run ended the set off Holly Toliver and Autumn Bailey kills.

The final set saw the Terps taking a 6-4 lead, they kept this going throughout the set until a 6-3 put the Spartans ahead 15-11. Late in the set, the Spartans went up 24-17 but the Terps fought back four match points before falling on a Toliver kill.

Toliver led the Spartans with 12 kills on a .476 hitting clip while picking up eight digs, in the back row Bailey picked up a team-best 10 digs along with seven kills.

The Terps were led by Erika Pritchard with nine kills while Kelsey Wicinski picked up a match-best 19 digs.

The Spartans took easy wins in the first two sets by identical 25-14 scores, then utilized their bench a bit more in the third frame where they secured the match victory with a 25-21 win.

Holly Toliver was the match leader in kills with 12, including the last three Spartan points in the third set. She hit .476 (12-2-21) and added eight digs, a pair of aces, and onne each assist and block. Three players had seven kills for MSU – Megan Tompkins, Autumn Bailey, and Brooke Kranda ; Tompkins added four blocks to lead all players in the match. Rachel Minarick had 30 assists and three aces to go with her eight digs, which was third behind Bailey (10) and freshman libero Jamye Cox (9).

For Maryland, Erika Pritchard had nine kills, hit a team-best .280, and added a pair of digs.

The Spartans return to action on Saturday when they host Ohio State in an 8 pm match at Jenison Field House.

QUOTABLE
“It truly seemed like it took forever between our first home tournament and when we got to return home to play in front of our home fans. Our student section was great, our atmosphere was outstanding, and its so great to feel the building behind you. I really thought our players did a good job of putting last weekend behind them and focusing on the task at hand tonight – there’s no easy opponent and no easy night. We’re halfway there – we will have our hands full again tomorrow night.”
– Head Coach Cathy George

“Credit to Michigan State, they’re a very experienced team,” head coach Steve Aird said. “Competing on the road is really tough in this conference, and this roster is really young. I need to do a better at prepping the team and getting them ready.”

The Terps struggled at the service line, making 11 service errors and just two aces. Michigan State had nine aces in the match.

Milana and Pritchard were able to notch early kills but the Spartans took a 9-3 lead in the first set. Milana posted a solo block in the middle of the set, but Michigan State pushed its lead to 20-10. Abigail Bentz served an ace and Samantha Drechsel had a late kill, but the home team was able to take the first, 25-14. Wicinski had nine digs in the first game.

Murray had a solo block and Jada Gardnercombined with Pritchard for another as the Terps took a 6-4 lead early in the second. Maryland hung close with the Spartans before MSU used a 10-1 run to take an 18-10 lead. Angel Gaskin and Pritchard had late kills, but the Spartans took the second, 25-14.

Pritchard had four kills and Maryland hit .265 in the third as Maryland tried to stay in the match. The Terps again stuck close early, but the Spartans worked to a 17-13 lead. With Michigan State at match point, Maryland was able to extend the set four times, including an ace from Angel Gaskin. A Spartan kill ended the match, 25-21.

The Terps return to action at No. 23 Michigan Saturday at 7 p.m.