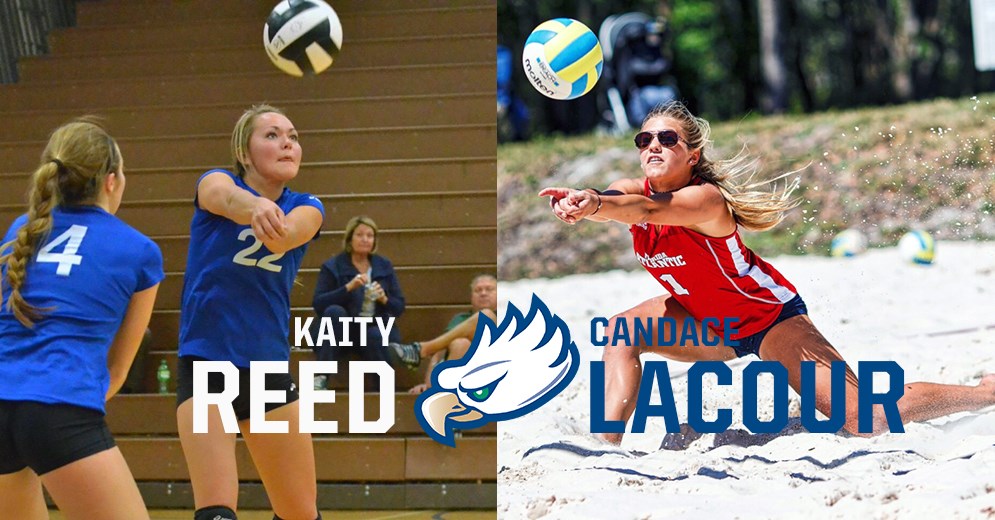 A pair of transfers are joining the Florida Gulf Coast Beach volleyball program for the 2019 season. Archive Photo via FGCU Athletics/Beach Volleyball

The Florida Gulf Coast Beach volleyball team’s roster just got a little stronger and deeper for 2019 with the addition of Candace Lacour and Kaity Reed, a pair of transfers joining the program.

Lacour comes to the team from another beach program in the sunshine state, Florida Atlantic. The Arizona native made an impact right away as a freshman with FAU and went 23-7, including a 13-match win-streak and an appearance on the CCSA All-Tournament Team before sitting out 2018. That will make her a redshirt sophomore with three years left of play and immediate eligibility for 2019 with the Eagles.

“Candace is a player with a lot of valuable experience, having competed collegiately at a very high level in the past,” Florida Gulf Coast Beach head coach Matt Botsford said in the team’s release of the addition. “She possesses a very good understanding of the game and her versatility, both offensively and defensively, will provide us a lot of flexibility.  She is a proven winner and a very focused young woman who I expect will make an impact right away.”

Just like Lacour, Reed played just one season at her prior stop, although hers came indoors at Southeastern. As a freshman she totaled a team-best 328 kills to go with 285 digs, 38 digs and 36 aces and was named First Team All-Sun Conference along with Freshman of the Year. The Indiana native will have four seasons left of eligibility in the sand though for FGCU.

“Kaity just recently decided to make the full-time move to the beach game,” Botsford added in the release. “She is a tremendous athlete who will develop quickly in an environment where her focus is on the sand. She has a great arm and is a physical presence along the net which coupled with her other skills, will provide us a great option within our line-ups.”

FGCU went 15-11 last season and 7-3 as a member of the Atlantic Sun and ended the season receiving votes in the AVCA Coaches Poll.