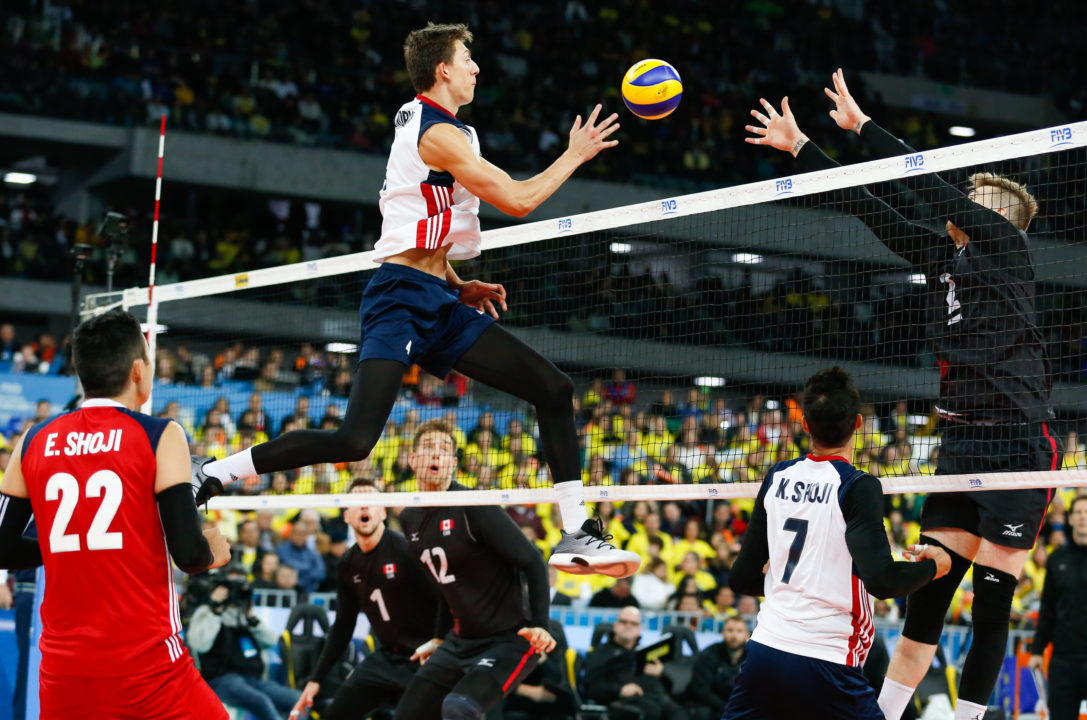 The monstrous leaps of the modern generation of players like Jeff Jendryk (above) has led the FIVB and NCAA to raise the height of the nets in men's volleyball. Archive Photo via FIVB

Ok, you caught us. Well, most of you did. This was our 2018 April Fools joke – we’ve left it up so we can all reminisce for the next year about how we almost believed it was true for a second, but it is not true.

The move comes in response to a fan survey done by the FIVB that said that fans believe that the men’s game has become boring, without enough rallies. The final straw appears to have been recent developments including Ivan Zaytsev’s record-setting 127 km/hour serve at the 2016 Olympics, which is believed to be a new Olympic Record; and the leap of 18-year old Canadian Sharone Vernon-Evans to touch 382cm (12’6.5″), which is 1.3 meters (4’7″) clear of the old men’s net height.

Several players also cited safety concerns, pointing to new concussion research that shows that repeated concussions, like those suffered by too many spikes to the face, can lead to long-term health issues. The FIVB conducted a study that determined that the average velocity of a serve would be reduced by approximately 4 miles per hour, and for a spike by 8 miles per hour.

“Defense wins championships,” said FIVB president Ary Graca of the decision. “This has been known for generations, across sports, yet in men’s volleyball, we have a situation where defenses have been rendered almost useless at the international level. It’s time to take our sport back to where it was a beautiful game. This change will be outstanding for fans of volleyball.”

But not everyone is in favor of the change. Don Thompson, who plays middle blocker for the Blockbusters, who were the 2017 City of Boise volleyball league champions in the 40+ division. “It’s already hard enough on my knees to get up and put any kind of a tip at 8 feet (sic),” Thompson said. “They’re fundamentally changing the game of adult rec-league volleyball and diminishing our ability to play the game as we were taught to play. This is bad for the sport of volleyball.”

The change will take effect after this summer’s World Championships internationally, and for the 2019 men’s NCAA volleyball season.

Thanks. I thought it might be JUST close enough that people would buy it. Was hoping that the rec league quotes was enough to give it away…though recent activity on Facebook indicates maybe not lol.

Why has the FIVB not considered moving the net height up a foot?