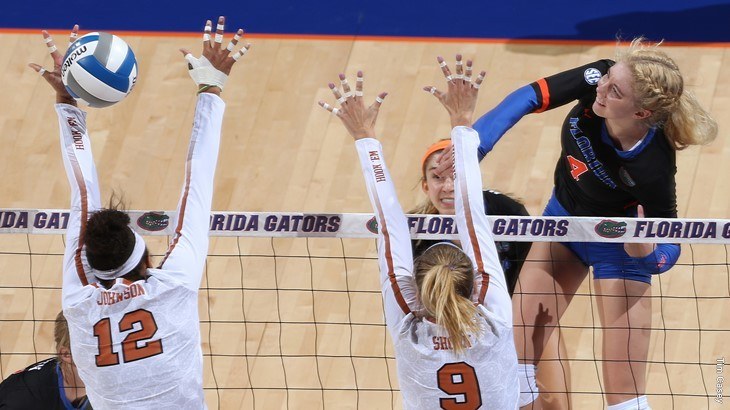 The Florida Gators opened their season on Friday night in the Exactech Arena at the Stephen C. O’Connell Center in... Current Photo via Florida Athletics

The Florida Gators opened their season on Friday night in the Exactech Arena at the Stephen C. O’Connell Center in Gainesville, Florida, which has completed a $64.5 million renovation in December of 2016 – just after the end of volleyball season. The arena, which also houses Florida’s basketball, gymnastics, and swimming teams, got a major face-lift. The entire arena now has chair-back seating, and additions include a new club level, center-hung scoreboard, a revamped concourse with new bathrooms and concession areas, plus a new grand entrance on the east side of the building.

The volleyball played last season at the much smaller Lemerand Center on campus, which meant average home crowds of just 744 spectators.

But the Florida faithful welcomed the 9th-ranked Gators back home with a near-record-setting crowd. 7,523 fans came to watch Florida knock off the top-ranked Texas Longhorns, the 2nd-largest home crowd in program history. The only bigger match came on October 14th, 1994 against Georgia, where 8,163 fans showed up. Florida won that match 3-1 en route to an SEC title.

The biggest crowd to ever watch Florida play was 15,119 when they played Nebraska in Omaha in a 2005 NCAA regional final. That’s the highest-attended women’s volleyball match in NCAA history that wasn’t part of a Final 4, and Florida lost 3-0. Nebraska will be Florida’s opponent on Saturday – and with the Huskers standing as the biggest draw in college volleyball, that record could be broken.

The renovations of the O’Connell Center reduced its official capacity from 11,548 to 10,133.

See Florida’s video recap of the affairs below: