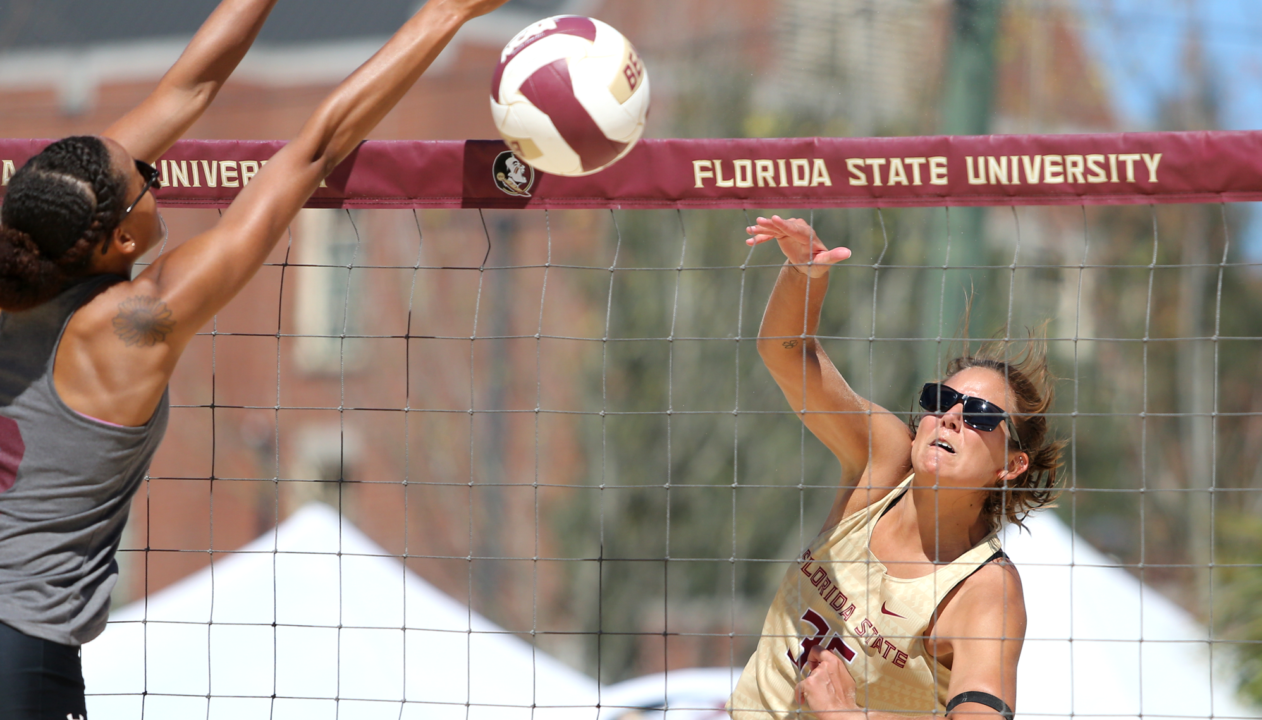 The No. 5/3 Florida State beach volleyball team heads into what could be its most challenging weekend of the season on Saturday, as it faces all of the other AVCA top-5 teams in the East Meets West Challenge. Current Photo via Florida State Athletics

The No. 5/3 Florida State beach volleyball team heads into what could be its most challenging weekend of the season on Saturday, as it faces all of the other AVCA top-5 teams in the East Meets West Challenge.

After a weekend of multiple west coast upsets and a shake-up in the polls, the Seminoles will now take on No. 1 Pepperdine, No. 2 USC, No. 3 Hawai’i and No. 4 UCLA in the annual event held at the Manhattan Beach Pier.

“We’re going to be tested a lot this week,” said head coach Brooke Niles. “We’re going to have a lot to prove out there, it’s going to be tough game after tough game. I think playing some tough teams at home last weekend was a good preparation for that and I think it gave us a little confidence.”

The Seminoles will play four matches in Manhattan Beach over the weekend before a string of midweek single-dual matches against Pepperdine, Loyola Marymount and Long Beach State over spring break.

The Waves enter Week #2 as the top-ranked team in both the AVCA and DiG Polls – marking their 14th time in history ranked as the No. 1 team. Pepperdine started off the season with a loss to Cal Poly, but bounced back last week to pick up a pair of wins over No. 1 USC and split matches with UCLA.

Pepperdine leads 7-1 in the series against Florida State, with the Seminoles’ only win coming last season in Tallahassee to earn their 26th straight win at home.

The Rainbow Wahine opened the season with a pair of big wins against No. 3 UCLA and No. 17 Stanford, and sense the has gone 2-2 with wins against Stanford and Loyola Marymount and a pair of losses to the Bruins.

FSU leads 5-4 in the series against Hawai’i. The Seminoles have beat the Rainbow Wahine twice under head coach Brooke Niles, once at the NCAA Championships in 2016 and once in Honolulu last season – both of which were 3-2 decisions. The last time the two teams met, Hawai’i knocked Florida State out of the NCAA Cham­pionships last season.

UCLA heads to the East Meets West Challenge after a big weekend at home, defeating No. 3 Hawai’i and No. 17 LMU in a pair of midweek single-dual matches. The Bruins currently hold a 7-3 record this season, with wins over Hawai’i, Pepperdine, USC and LMU.

Florida State leads 6-2 in the series against the Bruins. The last time the two teams met, the Seminoles knocked the Bruins out of the NCAA Championships last season for a fifth place finish.

The Seminoles will face the three-time defending national champions only once this season, taking on No. 2 USC in the final match of the East Meets West Challenge. USC’s 5-3 record this season includes wins over Arizona State, Nebraska, Cal Poly and UCLA, but it was a streak of losses to the Bruins and two losses to Pepperdine that knocked the team out of the No. 1 spot.

The Women of Troy lead 7-3 in the series against Florida State. The ten meetings in the series is the most FSU has with any team at the East Meets West Challenge. Southern Cal is on a five-match win streak against the Seminoles, all of which have come in the past two seasons.

o    Her 13 wins at the No. 1 position ranks seventh all-time. She only needs one more to tie Brittany Tiegs’ 14 wins, and five more wins to pass teammate Brooke Kuhlman’s 17 wins at the top position.

o    Her 34 wins in the No. 2 position ranks third all-time, behind Paranagua’s 42 wins in the position.

Noles Jump to No. 3 in DiG Magazine Poll

After going 4-0 in its opening weekend, FSU moved from No. 5 to No. 3 in the Week #1 DiG Magazine poll, and stayed there for Week #2. The Seminoles fell to No. 5 in the AVCA Coaches Poll in the second week.

The Seminoles emerged from the Stetson Spring Fling as the only undefeated team in the tournament, and one of only two AVCA top-5 teams (along with Southern California) to come out of the first weekend undefeated. FSU swept conference opponent Florida Atlantic, then defeated South Carolina, Georgia State and Stetson in 4-1 decisions.

FSU then continued to roll through its first home event of the season, giving up only one point in four matches to take down St. Petersburg College, College of Charleston and No. 15 Stetson.