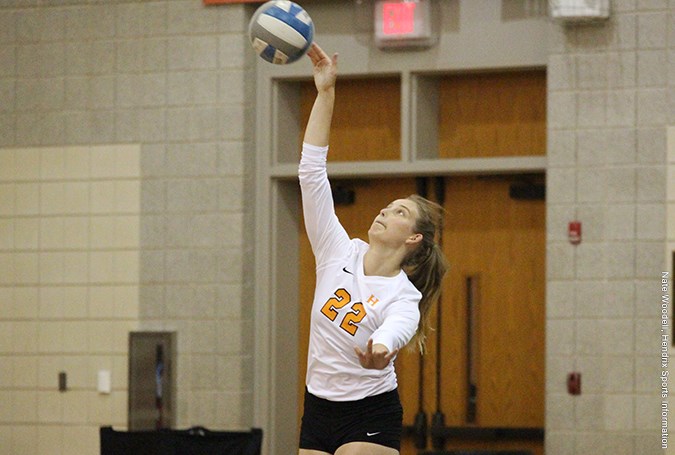 After starring at Hendrix College, Sara Dyslin is headed to Jacksonville for the 2018 season. Archive Photo via Nate Woodell/Hendrix Sports Information

Former Division III All-American middle blocker/right side Sara Dyslin is headed to Jacksonville University via transfer for 2018. Dyslin is a graduate transfer, so will have one year left and is immediately eligible.

The 6’1″ Dyslin spent her last four seasons at Hendrix College. As a freshman in 2014 she was an all-conference pick and NCAA Regional All-Tournament team. Year two as a sophomore was another strong one, as she earned AVCA All-America Third-Team as part of a long list of accolades to go with an appearance in the NCAA Tournament semifinals and the NCAA Regional Tournament Most Outstanding Player en route. As a junior she was the SAA Player of the Year before her 2017 was cut out due to injury.

In total for her time, she collected an 85-23 record in four years. That included three straight Southern Athletic Association regular season and tournament championships. She was also a three-time SAA First-Team choice and leaves the conference ranking second in career blocks (368). She also hit .358 in 2016, which ranked third in the league for one single season.

Dyslin also played on the Hendrix College women’s basketball team, where she averaged 18 points and 12 rebounds per game as a junior. A native of San Jose, California, Dyslin attended Lynbrook High School.

Dyslin now joins a roster for Jacksonville with two others who can fill the middle blocker role along with two players who can play right side.

Jacksonville is coming off of an 18-10 record and a 12-2 mark in the Atlantic Sun for a second-place finish. Their 2018 season gets underway on August 24 against Stony Brook and at South Florida.