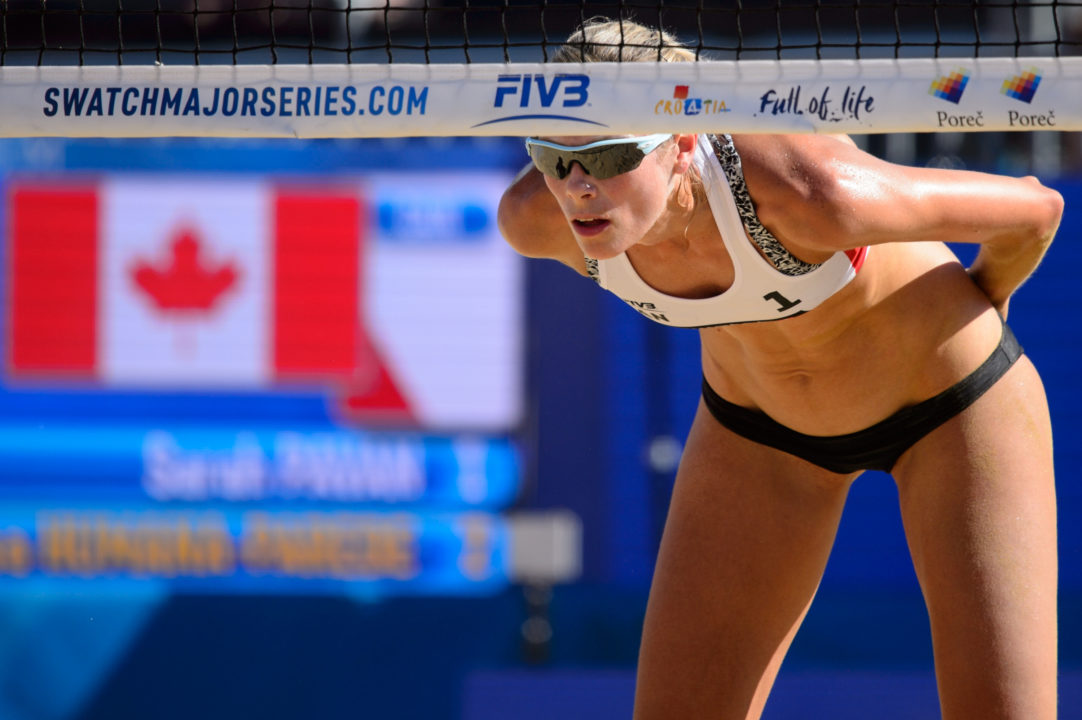 Pavan is more recently known as a beach star, but she was as good as student-athletes get for Nebraska's indoor team from 2004-2007. Archive Photo via FIVB

Pavan has had most of her recent success on the beach as one of Canada’s top sand volleyball players. That includes a win in last year’s Porec Major in Croatia, a premier 5-star event on the FIVB’s World Tour. She won $80,500 on the FIVB circuit last season, and is currently preparing for the semi-finals of the 2018 Commonwealth Games.

While at Nebraska from 2004-2007, however, the 31-year old was an NCAA superstar indoors. She finished her collegiate career with (and continues to hold) school records in career kills (2,008), kills per game (4.56), and holding the single season record for kills per game (5.10, 2006). She was a four-time First Team AVCA All-American, the 2006-2007 Honda-Broderick Cup Winner as the top female college athlete in the country; and was twice the AVCA’s National Player of the Year, as a junior and a senior. As a freshman, she once had 90 attacks in a game, and she recorded 586 kills in 2006 as Nebraska ran to the NCAA title.

As impressive in the classroom as she was on the court, Pavan also graduated with a perfect 4.0 GPA with a degree in biochemistry, earning her the ESPN The Magazine Academic All-American of the Year award as a senior.

When Pavan attended Nebraska, they didn’t yet have a beach volleyball team, and she first matriculated into professional indoor volleyball. A globe-trotting career indoors has seen her play professionally in Italy, South Korea, Brazil, and China, and also played on Canada’s indoor National Team from 2003-2010. In 2013 she took a test run on the beach, and within 2 years, she and then-partner Heather Bansley ranked as high as 2nd in the world.

She has continued to play indoors internationally even as the summer beach season has become her primary point of success. This season, she signed with Italian top-tier side Casalmaggiore, though she would wind up leaving the club in December to focus on the beach.

Pavan is one of 7 inductees in the class of 2018. 5 are being inducted as athletes, and 2 as coaches – including a pair of Nebraska football legends: Bob Devaney, who spent 16 years as the school’s head football coach where they won 2 national championships and had a 101-20-2 record. He then moved full-time into an Athletic Director role (after serving in both positions for a decade) and hired fellow inductee Tom Osborne. Osborne, a name synonymous with the school’s legendary football program, led the team to 3 national championships and is one of the most successful coaches in college football history. Devaney is the namesake of the arena where Nebraska’s women’s volleyball team plays: the Devaney Sports Center.