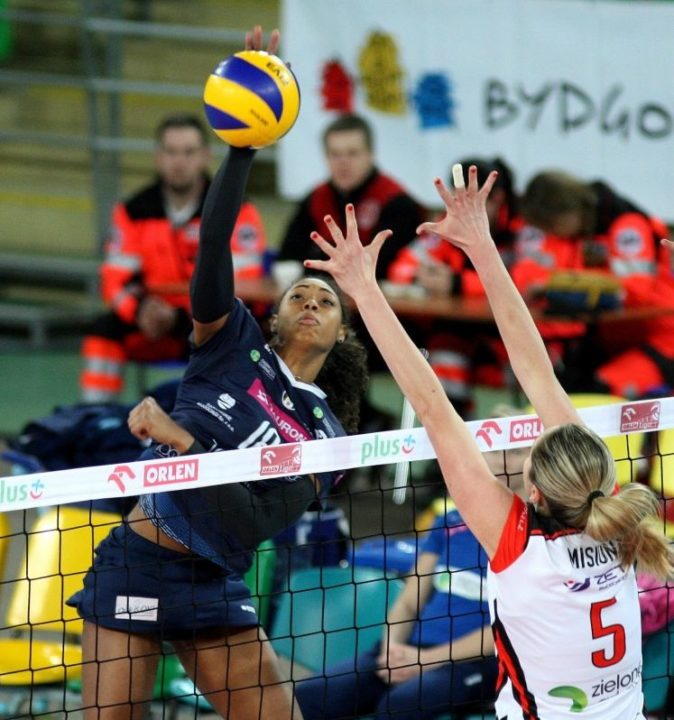 The 26-year-old is transferring out of Poland's LKS Lodz. She spent her last three seasons in Poland after debuting as a pro in Azerbaijan Current Photo via http://www.trentinorosa.it/

Former Penn State star Deja McClendon has just been announced by Italian club Delta Informatica Trentino in the team official’s website as its roster newest addition. The 26-year-old is transferring out of Poland’s LKS Lodz. She spent her last three seasons in Poland after debuting as a pro in Azerbaijan.

McClendon was a college phenom from the get go. Her career accolades include National Freshman of the Year, AVCA All-America First Team, and NCAA Tournament Most Outstanding Player awards. She won national titles in 2000 and 2013. Here are her first words as part of her new team:

“I’m very excited about this season, above all because it will be the first time I will have the chance to play in the Italian championship. I think this group of girls will be able to do great things and I’m happy to be part of this team. Nicola Negro is a great coach that I have already had the opportunity to meet in the recent past and I am thrilled to finally have the chance to work with him. My expectations for this year are to play at the highest levels throughout the season and to compete with the best teams. I look forward to joining the Trentino Rosa family.”

“We are particularly happy and honored that an athlete of the caliber of Deja has accepted our proposal. It has been a long and demanding negotiation but we are convinced that we have succeeded in bringing a high level player to Trento that can allow us to make an important leap in quality.”

McClendon will be the first ever American to play for Trentino. The team finished last season with a 20-12 record, good enough for 6th place in A2’s standings. A competitive squad, this is the perfect opportunity for McClendon to showcase her skills and make the jump to Italy’s A1 league, arguably the best in the world.