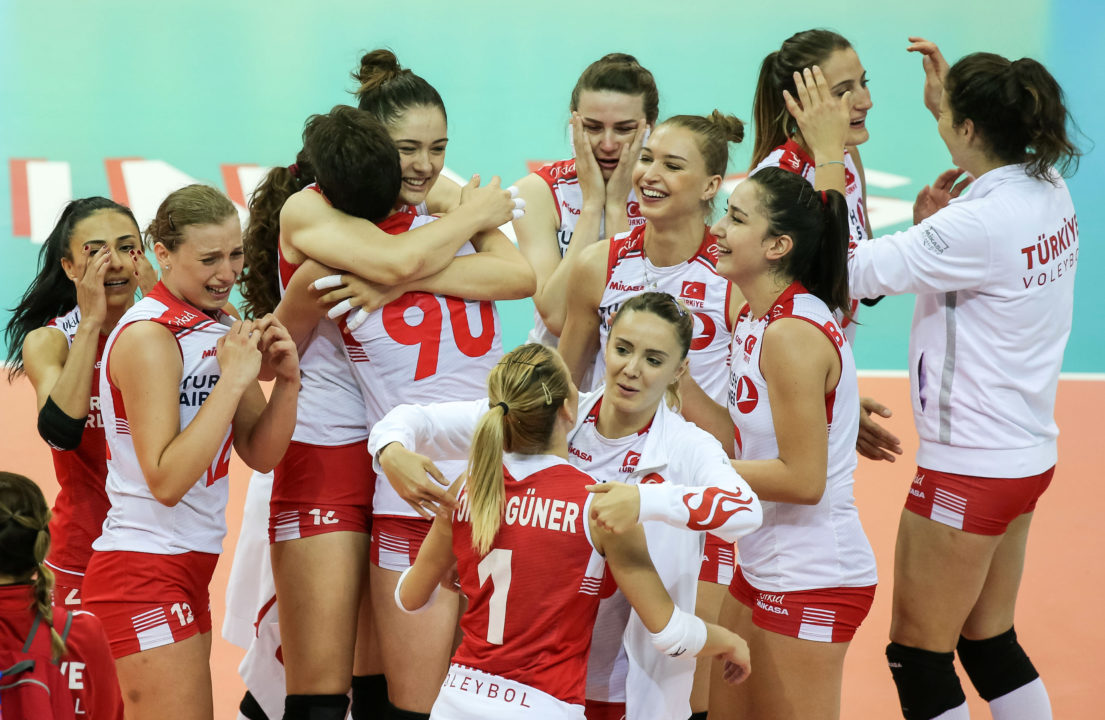 With their backs against the wall, Turkey downed Serbia in five sets to stay alive as we move closer to the semifinals at the VNL. Archive Photo via FIVB

The United States got revenge on Turkey in the opener from an earlier group match, and Turkey did the exact same by downing Serbia in five sets. Beyond the vengeance, the victory keeps Turkey’s hopes alive for a bid to the semifinals, as a loss would have eliminated them. For Serbia, they now have a must-win tomorrow with USA which could create a three-way tiebreaker with a win.

Turkey’s calling card was their biggest strength throughout so far in the block, which gave them a 13-11 advantage. However, it also appeared to cause some mental distress for Serbia with how good it can be and led to the Serbians racking up five more errors. Those two were key to overcome a spike (63-59) and ace (6-5) advantage for Serbia.

Tijana Boskovic (31 points) almost led a Serbian comeback after they trailed 2-1 in sets and she helped push things to extra points in the fifth. She also had strong performances from Milena Rasic (14 points) and Bojana Milenkovic (13 points), but after the top three everyone else totaled just 22 points.

For Turkey, they didn’t get a 30 point explosion from any individual, although Hande Baladin hit the 20 point plateau. Ebrar Karakurt (14 points) and Eda Erdem Dundar (12 points, four blocks) were crucial as well, with the others outside of the top trio notching 31 points to make up for the deficit of each team’s top scorer.

Moving forward, things are simple if the Americans down the Serbians tomorrow; the U.S. and Turkey would advance. However, if Serbia downs the Americans it all goes down to how many sets it occurs in. If Serbia wins in three or four, Serbia and Turkey would move on. If Serbia wins in five, then everyone would be 1-1 with 3 points and it would go down to set and potentially point ratio to determine who moves on to the semifinals.

Turkey captain Eda Erdem Dündar: “We are so happy with the win, but I think in the first set, we could not handle the game. Then in the second set, we found our rhythm for a while and kept it. But in the fourth set, our play went down with our mistakes. But what we did in the tie-break, I enjoyed it a lot. What we showed as a team was incredible. I am so proud of my team. We know that our chances depend on tomorrow’s match but anyway, if we cannot proceed, I am still happy with the performance of our young team.”
Serbia coach Zoran Terzic: “I would like to congratulate Turkey, they deserved to win today. There is no doubt about it. I definitely cannot be happy or satisfied, not just because we lost the game. From time to time you lose, and from time to time you win. But today, we we did not play well. I do not exactly know the reason because it was the first match and we are not really tired. But definitely, we did not play at a high level. We will try to improve tomorrow to play better and to win, of course.”

While Turkey kept themselves alive with a win in the early match, Netherlands could not do the same with their backs against the wall and crumbled against Brazil in straight sets. That means the Dutch are no more in the 2018 Volleyball Nations League while Brazil locks up a spot in the semifinals.

Brazil established an early physical advantage, and punished a lack of defense at the net from the Dutch early on, winning the opening two games 50-33 combined. Tandara Caixeta (17 points) continued her strong tournament while Gabriela Braga Guimaraes (14 points) and Ana Beatriz Correa (10 points, three blocks) each pitched in double-digit scoring. Adenizia Da Silva (9 points) wasn’t far behind, and was the leader in blocks (6) for the match.

In the losing effort, Lonneke Sloetjes (15 points) picked up where she left off from the previous match and Yvon Belien (8 points) was efficient, but no other Dutch player had more than five points. That was in large part due to the Brazilian defense at the net, that helped quell Netherlands attack and lead to the result.

As one would expect in a match where Brazil outscored the Dutch 75-56, the South Americans dominated the team stat categories. The most notable was a 10-2 edge in blocking, but they also had more spikes (45-36), aces (6-2) and only had two more team errors throughout being the aggressor.

As previously mentioned, the result means that Brazil now moves on to the semifinals. China will also get to join them now that the Netherlands’ tournament comes to a close. That means the China-Brazil match tomorrow will just determine who plays who in the semifinals, but neither team can really go hard for one result or another to set up a more favorable match since Pool B can go so many different directions. Nonetheless, the winner of China-Brazil gets the runner-up of Pool B, while the loser gets the victor of the pool.

Brazil captain Roberta Ratzke: “The Netherlands gave us a good fight. I am so happy about the game. I think we went into the court with full focus on what we had to do. I think our service was very good, and we needed this win today. Now we can rest for just a little bit, then focus again. It is a short finals round and while we won today we need to think about tomorrow.”
Netherlands coach Jamie Morrison: “Congratulations to Brazil. That was an excellent display of how volleyball should be played. Our team, overall, has had a good tournament and I am very disappointed that it ended the way that it did tonight. I hope we learn from it and I hope we remember this loss and that it makes us hungry for what’s to come at the World Championship.”