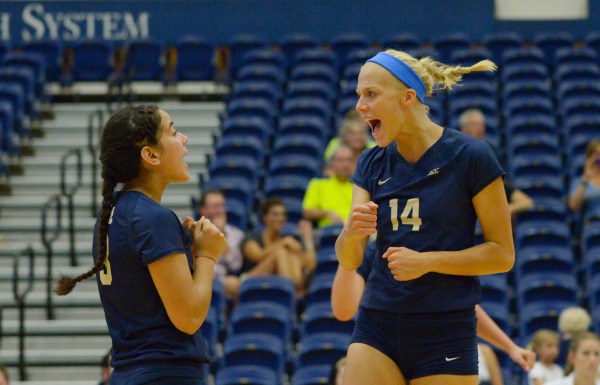 Potts was named an Honorable Mention All-American by the AVCA in her senior season at Pitt. Current Photo via Courtesy: Pitt Athletics

French club VCMB LM Elite has announced in its official Facebook page the signing of former Pittsburgh star Jenna Potts to its roster. The 24-year-old 6’3″ middle blocker is transferring out of Germany’s Stutggart and is set to undergo her third professional season. She has also spent a season in the Czech Republic with Kralovo Brno. In her first experience in France, she will find a VCMB team that is set to return to the first division of French volleyball after gaining promotion through the lower tier leagues.

Potts was on the roster for one season at Xavier University on a medical redshirt before using all four years of eligibility at Pitt. In her senior season, Pitt advanced to the second round of the NCAA tournament, where they fell to powerhouses Penn State. Among their claims on the season included being the only ACC team to knock off eventual conference champions North Carolina. Potts ranked 33rd nationally in blocks-per-set, averaging a career-high 1.32 per. She also had a career high in kills (201/117 sets, 1.72-per) and hit a blazing .355 on the season ranking her 45th nationally and 2nd in the ACC. Potts was named an Honorable Mention All-American by the AVCA for her efforts.